A month ago Quebec had COVID-19 under control. Now it's spreading out of control again. What happened?

Quebec had the virus under control, now its biggest cities are under new lockdown measures 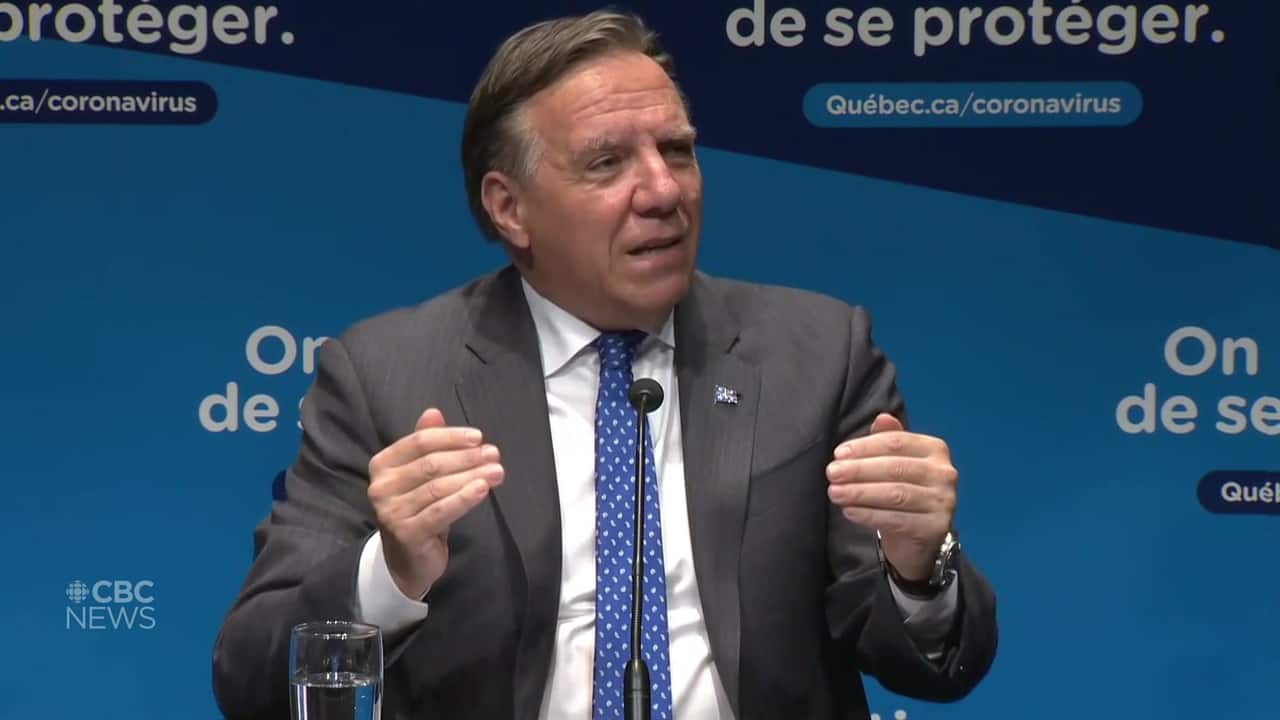 A little over a month ago, Health Minister Christian Dubé congratulated Quebecers for their hard work at containing the spread of the coronavirus.

It was a Tuesday, Aug. 25, and the province had registered just 94 new cases of COVID-19 in the previous 24 hours.

"We have really succeeded at controlling the transmission of COVID," Dubé said at a news conference in Montreal.

It was a statement of fact, but the ground had already started to shift. In the weeks that followed, transmission increased. At first it grew slowly, then exponentially.

On Monday, the government implicitly acknowledged it has again lost control of the virus. The province is reimposing lockdown measures on Quebec's two biggest cities, starting Oct. 1.

Until Oct. 28, Quebecers won't be able to entertain friends or families at home. Bars, restaurant dining rooms, theatres and cinemas will also be closed.

"The situation has become critical," Premier François Legault said Monday evening. "If we don't want our hospitals to be submerged, if we want to limit the number of deaths, we must take strong action."

The new measures will bring abrupt changes to the lives of millions of Quebecers. They will also prompt questions about how the public health situation could have deteriorated so quickly.

This story tries to trace how Quebec again lost control of the spread of COVID-19.

At first, a stern warning

As Dubé addressed reporters on that Tuesday in late August, public health officials in Quebec City were busy trying to track down patrons of Bar Kirouac, a watering hole in the working-class Saint-Sauveur neighbourhood.

A karaoke night at the bar ultimately led to 72 cases and the activity being banned in the province.

There were also numerous reports by then of young people holding massive house parties and flouting physical distancing recommendations. One of them, in Laval, led to a small outbreak.

Why are Montreal and Quebec City at the highest COVID-19 alert level?

26 days ago
1:52
Infectious disease specialist Dr. Cécile Tremblay discusses how we got there and what it means. 1:52

"There has been a general slackening in Quebec," Legault said. "It's important to exercise more discipline."

Legault and his health minister threatened stiffer punishments for those who disobeyed public-health rules, but stopped short of imposing new restrictions.

Private gatherings identified as the culprit

In late August, public health officials were attributing the rise in infections to Quebecers returning home from vacations around the province, as opposed to the start of school.

Though Quebec's back-to-school plan wasn't met with widespread criticism, some experts expressed concern about the large class sizes and the lack of physical distancing guidelines for students.

The government also ignored advice that it should make masks mandatory inside the classroom.

But the first weeks of the school year went relatively smoothly. By the start of Labour Day weekend, only 46 out of the province's 3,100 schools had reported a case of COVID-19. Importantly, there were no major outbreaks.

The problem was elsewhere. Outside schools, in the community at large, cases continued to rise. On Sept. 8, the province was averaging 228 cases per day.

By now public health officials had identified private gatherings as the main culprit behind the increase.

Montreal's regional director of public health, Dr. Mylène Drouin, was among those who urged more caution when hanging out with friends and family.

"Yes, we can have social activities, but we have to reduce contacts to be able to reduce secondary transmission," Drouin said on Sept. 9.

In an effort to spell out the consequences of the increase in cases, the Quebec government unveiled a series of colour-coded alert levels.

At this point, though, health experts were already concerned that more was needed to curb the spread of the virus.

"It is important to intensify these measures," Dr. Cécile Tremblay, an infectious disease specialist with the Université de Montréal hospital network, said after the alert levels were announced.

The warning signs were starting to multiply.

Officials in Montreal were investigating 20 outbreaks at workplaces on Sept. 9; a week later that number had risen to 30. Long lines were also forming outside testing centres, filled with anxious parents and their children.

And more stories were circulating of private gatherings where the 10-person limit was ignored, angering the health minister.

He told reporters about a dinner with 17 people at a restaurant in Montérégie, which led to 31 cases. A corn roast in the Lower St. Lawrence, he said, resulted in 30 cases.

"If people won't understand from these examples then, I'm sorry, but they'll never understand."

He moved Montreal, and four other regions, into the yellow zones and banned bars from serving food after midnight. The province was averaging 338 new cases per day.

The warnings from the government did not curb the spread of the virus. By mid-September, authorities were reporting more cases in closed settings.

On Sept. 17, Herzliah High School in Montreal became the first school in the province to say it was shutting down for two weeks to deal with an outbreak. At least 400 other schools were also dealing with active cases of COVID-19.

Cases accumulated too in private seniors homes (known as RPAs), a major source of concern for public officials given the vulnerability of the residents to COVID-19.

On that day the government announced it was moving Montreal, Quebec City and the Chaudière-Appalaches region into the orange zone, the second-highest alert level. Private gatherings were capped at six people.

The province was by then averaging 501 new cases per day. The second wave had begun, according Quebec's public health director, Horacio Arruda.

Over the last week, Quebec's health system has shown signs of strain as authorities race to contain the spread of the virus.

Drouin, the Montreal public health director, admitted on Sept. 21 that her contact-tracing teams were swamped by the demand.

Until now, the increase in cases had not been accompanied by a corresponding surge in hospitalizations. Most of the new cases were concentrated in younger people.

But the number of hospitalized COVID-19 patients in Quebec has increased by 45 per cent in the last seven days. Hospital staff are starting to get stretched. Several thousand health-care workers are in preventive isolation.

"We're feeling the second wave," Dr François Marquis, the head of intensive care at Montreal's Maisonneuve-Rosemont hospital. "We were apprehensive about it, but now it's a reality."

On Monday, Quebec reported 750 new cases of COVID-19. Montreal and Quebec City were classified as red zones later that evening.