Politicians and Muslim leaders called for greater tolerance and openness at the Montreal funeral today for three of the men killed in the Quebec City mosque shooting.

Politicians and Muslim leaders called for greater tolerance and openness at the Montreal funeral today for three of the men killed in the Quebec City mosque shooting.

Several thousand people gathered at the Maurice Richard Arena for a service for Khaled Belkacemi, Abdelkrim Hassane and Aboubaker Thabti, who were honoured before their bodies are repatriated to their countries of origin.

In a show of solidarity, one by one, political leaders and representatives from the Muslim community spoke of the importance of coming together.

"It is with a heavy heart that we come together this afternoon to grieve the loss of these innocent lives," Prime Minister Justin Trudeau said.

"But as a community and country, together we will rise from this darkness stronger and more unified than ever before." 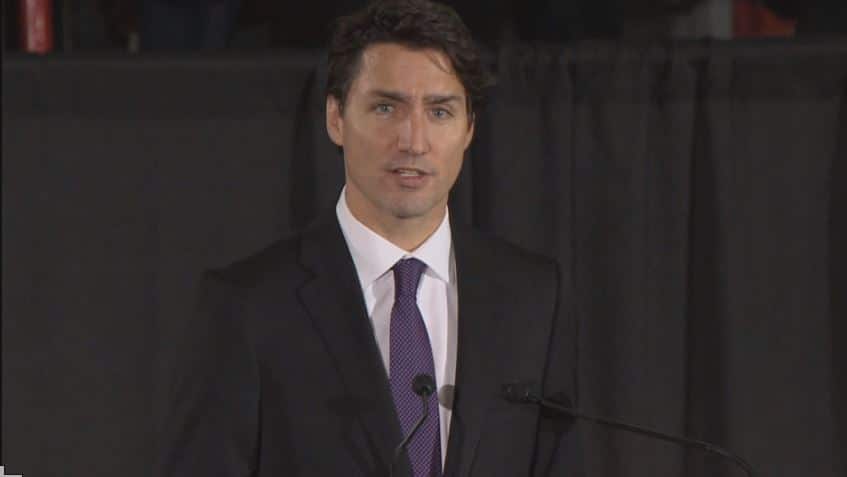 Trudeau: 'We will rise from this darkness'

4 years ago
0:41
Trudeau speaks at funeral for victims of Quebec mosque shooting 0:41

The funeral began nearly a half hour later than expected, with a steady stream of mourners required to pass through security on their way into the building.

At times, the atmosphere resembled a political rally, with hearty applause after calls for unity. The shooting has prompted soul searching in Quebec about the tone of news media coverage and political debate about Muslims.

Alexandre Bissonnette, 27, has been charged with six counts of first-degree murder and five counts of attempted murder in connection with the attack, which also left 19 injured.

The caskets of the three men honoured Thursday were draped in wreaths and the flags of their homelands.

Thabti, 44, was a pharmacist of Tunisian origin who had three children. Belkacemi, a 60-year-old father of two, was from Algeria and a professor at Laval University. Hassane, 41, also from Algeria, was a father of three and worked in information technology for the provincial government.

There were also prayers at the service for the other three men killed in the mosque attack, Mamadou Tanou Barry, Ibrahima Barry and Azzedine Soufiane, who will be remembered at a service in Quebec City on Friday.

The final prayer is called a janaza. The Arabic word means "to prepare for burial," but the original meaning is "to cover."

It refers to the shrouding of the deceased with a single piece of cotton cloth, as well as to the supplication in the funeral prayer itself, which calls on God to forgive the misdeeds of the deceased. The prayer, which is mostly silent, ends by asking God for mercy and forgiveness for the living as well.

A representative from the Muslim community said she's hopeful the attack will provoke reflection about the dangers of Islamophobia.

"The empathy shown by so many fellow Canadians comforts us, and allows us to hope that there will be real change." 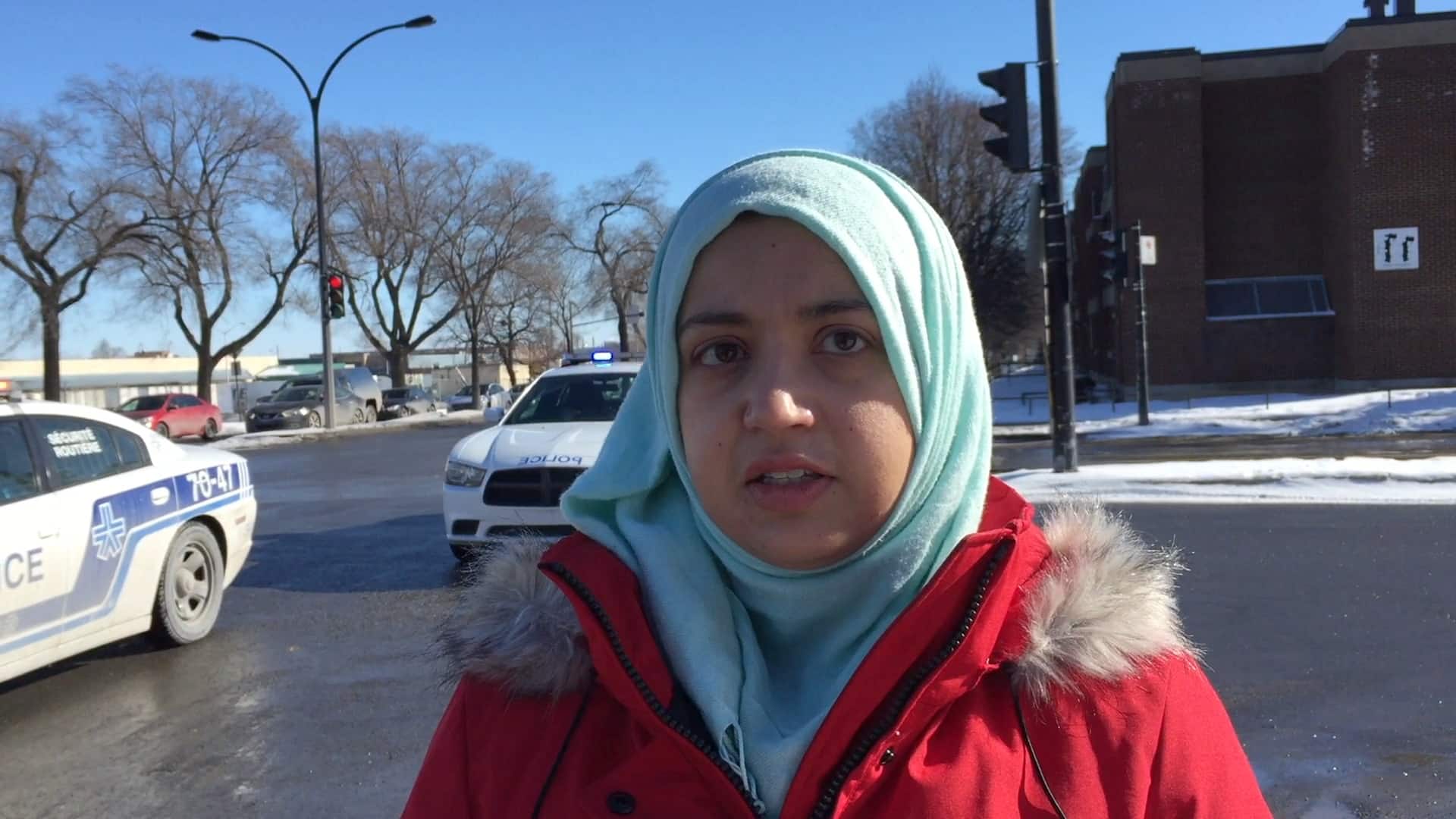 4 years ago
1:38
Mourners share messages of hope and solidarity at the Montreal funeral for Quebec City shooting victims. 1:38

'We are all in mourning'

Mayor Denis Coderre, who helped organize the public funeral, said it was a chance to show solidarity with the victims and their families.

"We lost six Quebecers, six Canadians," he said. "We are all brothers and sisters. We are all in mourning."

At a news conference after the funeral alongside Muslim leaders, Coderre stressed that there is no "us and them. We are all 'us.'"

For his part, Quebec Premier Couillard reiterated his call for a more tolerant discourse in the province, in news coverage and on social media.

"Words that people speak, that people write, are not harmless. They mean something," he said.

"They can unite people, they can heal people. They can also hurt."

Mohammed A Matin was among the mourners. He arrived early, saying it was important for him to show solidarity and mourn the victims.

"The main thing is that we have to show the people — Christians, Jews, Muslims or others — that we are united against the violence, against the terrorism. All of us. everyone."

Couillard: 'What unites us is stronger than what divides us'

​The funeral for the other three men killed in the attack will be held at the Quebec City convention centre Friday.

Quebec City Mayor Régis Labeaume, who was also at the Montreal event, will be among those in attendance.

Quebec City doesn't have a place to bury people of the Muslim faith. Hadjira Belkacem, head of a non-profit Islamic burial association, said the five Muslim cemeteries in Quebec are all in the Montreal area. 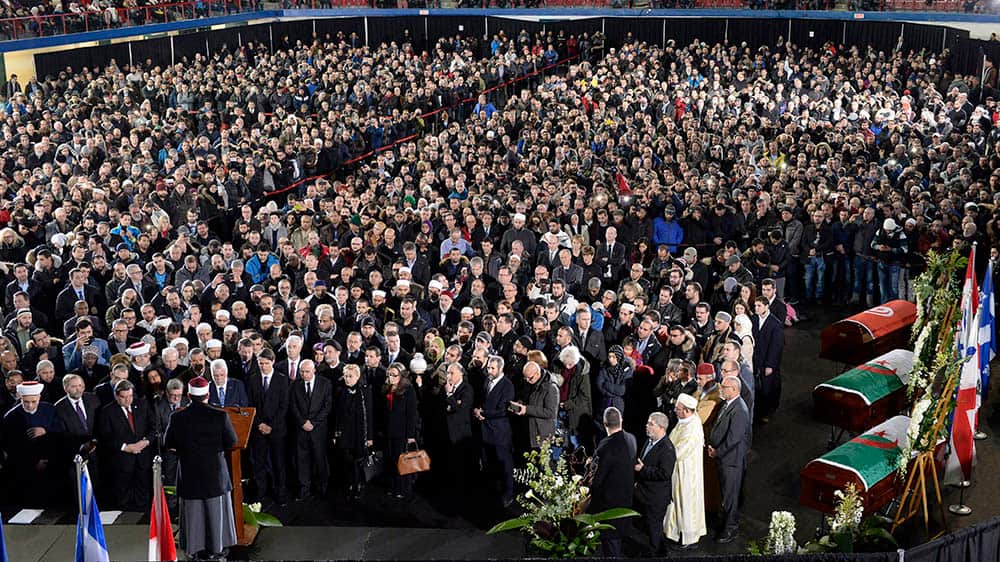 4 years ago
1:43
Select moments from the funeral for three of the six victims of the Quebec City mosque shooting 1:43

Families of Muslims who die outside Montreal have to either deliver the bodies for burial in Quebec's largest city, or pay thousands of dollars to have them shipped to their countries of origin, he said.

With files from Jaela Bernstien, Nazim Baksh and The Canadian Press