Alexandre Bissonnette, the man who stormed a Quebec City mosque in January 2017, killing six and critically injuring five, says he has changed his plea to guilty because he is deeply sorry for the pain he caused and is ashamed of his actions.

Alexandre Bissonnette, the man who stormed a Quebec City mosque in January 2017, killing six and critically injuring five, changed his plea to guilty Wednesday saying he is deeply sorry for the pain he caused and is ashamed of his actions.

Reading from a written statement, the 28-year-old addressed a Quebec City courtroom filled with the victim's families, survivors and their supporters Wednesday.

Before reading his statement, he confirmed to Judge François Huot he was ready to plead guilty to six counts of first-degree murder and six counts of attempted murder.

"I'd like to ask for your forgiveness for all the harm I caused you, even though I know what I did is unforgivable," he said.

"In spite of everything that was said, I am not a terrorist, nor Islamophobic … [I am] more a person who was carried away by fear and a horrible form of despair."

He did not offer any further insight into his motivation for the mass shooting, adding, "I don't know why I committed such a senseless act."

He stared straight out at the courtroom as he approached the witness box clutching the piece of paper Wednesday morning.

One of the attempted murder charges collectively represented the 35 people, including four children, who witnessed the Jan. 29, 2017, shooting at the Islamic Cultural Centre of Quebec.

The plea change was a dramatic turn of events from Monday, when Bissonnette began the pretrial proceedings by entering a not guilty plea.

Five hours later, he told the court he wanted to reverse that plea.

Huot ordered a publication ban on all of Monday's proceedings to allow time for a psychiatric evaluation.

Psychiatrist Sylvain Faucher met with Bissonnette that evening, and told Huot on Wednesday he believed Bissonnette was capable of making such a decision.

Faucher had met Bissonnette seven times since 2017. He said the man had suicidal thoughts and took anti-depressants, but his mental state had improved over the past months.

"He didn't want to be responsible for another mass tragedy," Faucher said.

While only about a dozen people showed up for the first day of the hearings on Monday, most of the seats quickly filled up Wednesday morning.

The 28-year-old stared straight out at the large crowd for several seconds as family members of the victims sat side by side in the front rows.

The silence was only broken minutes later, when Huot entered the room. Several survivors were present, including Aymen Derbali, who is in a wheelchair after being shot seven times that night.

​Derbali's wife leaned over to hug her husband as the judge read out the names of the six men who died, the five who survived gunshot wounds and the 31 who saw it all.

Others in the crowd let out guttural sobs as the judge said the word "guilty."

All six men who died were husbands and fathers.

In all, 17 children lost a parent in the shooting.

Amir Belkacemi, the son of Khaled Belkacemi, said outside the courtroom that he is relieved he won't have to endure a trial.

"I think the events that took place last year were very traumatic,very difficult," he said. "No one really wants to live those traumatic days again." 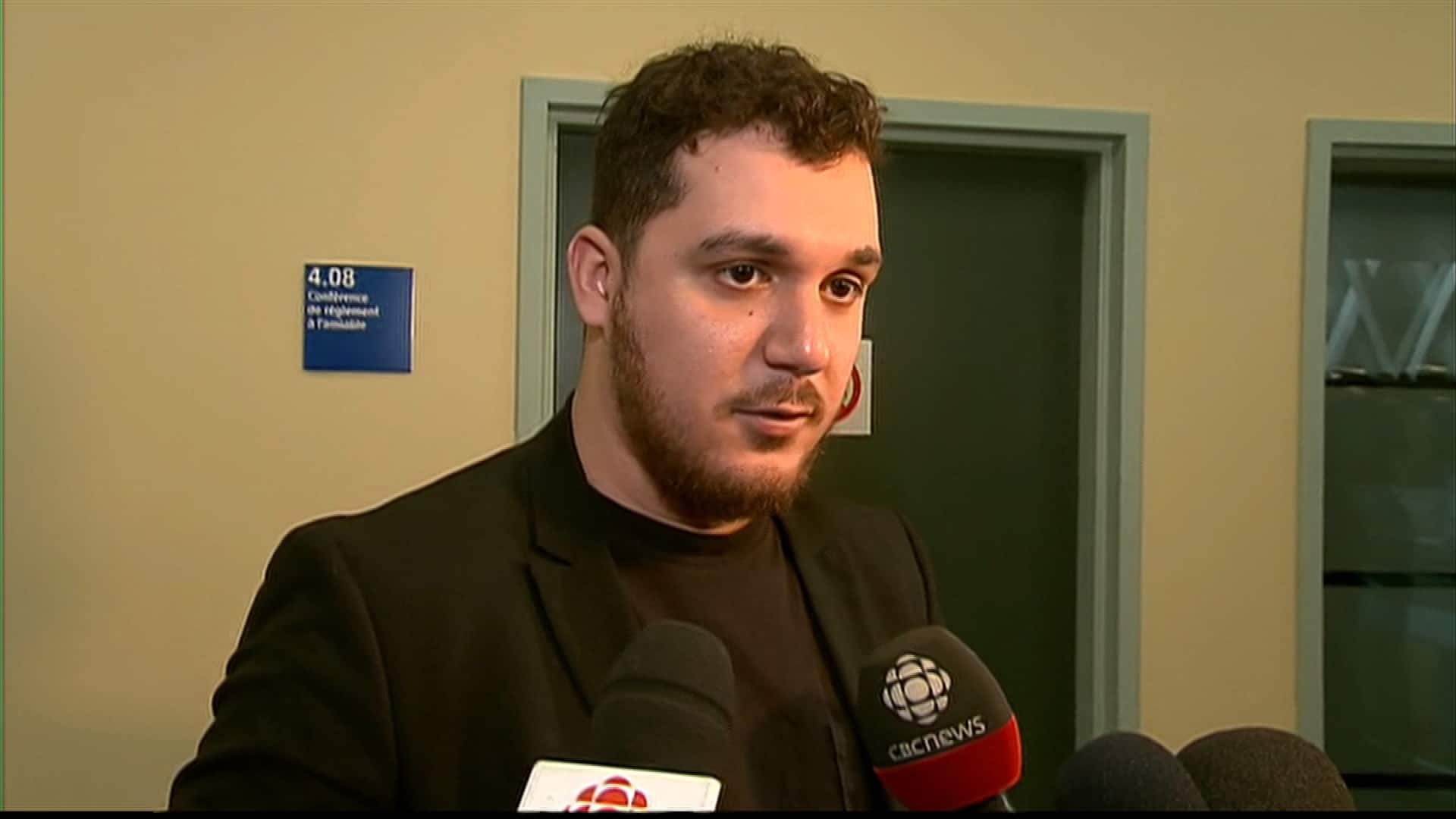 Bissonnette told Judge Huot on Monday he had thought a long time about pleading guilty but "certain elements" were missing and, on the advice of his lawyers, he made the decision to plead not guilty until that was resolved.

"I understand it can seem strange," said Bissonnette.

The judge peppered Bissonnette with questions about his decision to change his plea to ensure the "validity" could not be called into question.

Bissonnette said, "In my heart, I made the decision to spare the victims and their families from going through a trial and reliving the tragedy."

Mohamed Labidi, the former president of Quebec City's Islamic Cultural Centre, said the community is pleased that the survivors and victims' families were spared the ordeal of a trial, but closure is still difficult.

"We still need another explanation, because the small words that he announced, they don't convince us about all [motivation] of the crime," he said.

"A lot of victims, a lot of suffering, at the end, for nothing."

A first-degree murder conviction carries an automatic life sentence without the possibility of parole for 25 years.

Huot asked Bissonnette on Monday if he fully understood that if he was ordered to serve the sentences consecutively, it would add up to a minimum of 150 years.

His lawyers said they intend to challenge the constitutionality of consecutive sentences.

Crown prosecutor Thomas Jacques said no deal was made with Bissonnette in exchange for his guilty plea.

"Consequently, no agreement on sentencing will be made."

Bissonnette's lawyer Charles-Olivier Gosselin said his client is a "troubled young man," but he wanted to take full responsibility for his actions. He said evidence will be presented at the sentencing hearing concerning his mental state.

Both sides will return before the judge on April 6, to begin debating what will be presented as evidence for the sentencing hearing.

The abrupt conclusion to what was expected to be a substantial trial comes two months after the community gathered again to honour the victims and mark the event on the first anniversary of the shooting.

with files from CBC's Benjamin Shingler