With 'no end in sight' to COVID-19 lockdown in long-term care homes, 43-year-old wants out

Engineer and disability rights activist Jonathan Marchand, who breathes with a ventilator, said the COVID-19 crisis in Quebec's long-term care homes is showing the limits of the institutionalized patient care.

From the moment he moved into the CHSLD in Sainte-Anne-de-Beaupré in 2012, Jonathan Marchand has wanted to move out. But never has it seemed more pressing than it does right now.

"I don't feel safe at all," said Marchand, 43, who requires round-the-clock help to monitor the ventilator he needs to breathe.

The COVID-19 crisis has underscored the limits of the province's long-term care system, he said, and compounded his desire to live in his own home.

While there have been no cases reported at the institution where he lives, so far, Marchand said "it's inevitable" it will happen eventually, with more cases, and more deaths, spreading across the province every day.

In the meantime, Quebec's ban on visits to long-term care homes has meant he and his partner — who, in normal times, visit daily — haven't seen each other since mid-March.

"Currently, we live in total isolation, extreme isolation," said Marchand. He fears that even as as the government begins lifting restrictions, long-term care homes will be the last ones to go back to the way things were before the pandemic.

"There's no end in sight," Marchand told CBC's Quebec AM. 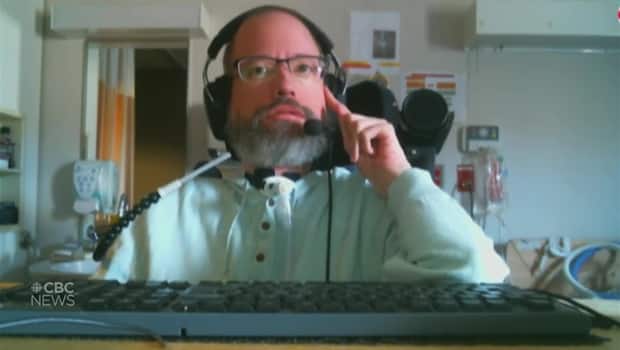 Lack of assistance is big threat to safety even without COVID-19, says Quebec long-term care resident

9 months agoVideo
5:08
Quebec long-term care resident Jonathan Marchand, who has muscular dystrophy, says he wants the right to be cared for outside of an institution. 5:08

The computer network engineer has muscular dystrophy, but into his 30s, he was able to live on his own with limited assistance — even spending some time working in Australia.

Then a severe case of pneumonia put him in hospital in 2010, and he underwent a tracheotomy. It was two and a half years before he was released from hospital and into the CHSLD, located 35 kilometres east of Quebec City — a place he is unable to call home.

"Living in a long-term care facility is no life," said Marchand. "I've got no future — nothing to look forward to."

The benefits of community-based care

Marchand has spent years researching other models for community living around the world. He's particularly interested in Sweden's, where health-care workers paid by the state go to people's homes.

Marchand said the cost to Quebec of his full-time care at the CHSLD is $335,000 annually. He estimates it would cost nearly $80,000 a year less, around $256,000 annually, to pay full-time assistants to meet his health-care needs in his own home.

More important, he would have control over his own life.

"I need to be able to live like any other Canadian citizen in the community — to be able to participate and contribute to society," he said.

Marchand co-founded a co-operative called COOP-Assist, with the hope that it will become a resource for people with disabilities, allowing them to recruit their own caregivers and manage their own needs.

In 2019, he was in discussions with the government about launching a pilot project, he said.

"They were going to contact us 'in a timely manner,'" said Marchand.

His co-operative is on hold, for now.

Lawyer Paul-Claude Bérubé, who chairs the Canadian Accessibility Standards Development Organization, said it's been hard to persuade the present or past governments to overhaul the existing system.

He said opening the door to paid home care for younger adults would mean acknowledging there is "a systemic problem."

"It's more than just addressing the issue for people with disabilities," said Bérubé.

"If you are 72 years old, and you can stay at home and just need services to get out of bed and wash, I'm sure most elderly people would choose [home]," he said.

For Bérubé, forcing people in circumstances like Marchand's to live in a place where they don't want to be living "is totally unacceptable" and goes against the Quebec Charter of Rights.

Since some people are able to afford to pay for their own home care, the government's unwillingness to subsidize that service for others "creates two classes of people with disabilities — those who have money, and those who don't."

There are other issues, as well.

Marchand said Quebec's Professional Code, which enshrines in law which services each professional order is exclusively allowed to provide, is also an obstacle to any changes in long-term care.

For instance, not all health-care providers have the right to touch a ventilator, making it harder to find a qualified caregiver to look after him in his home.

"The discrimination I face is even coded into the law," said Marchand.

Still, Marchand finds the lack of political will the biggest obstacle.

A spokesperson for the minister responsible for seniors, Marguerite Blais, referred CBC back to the Health and Social Services Ministry.

In an emailed statement, the ministry said it studied Marchand's pilot project in 2019 and found it to be "laudable."

Marchand estimated it would cost $4 million to $8 million to serve 30 to 70 clients, but that would not be "financially sustainable" if it were to be applied to thousands of patients, the ministry said.

"The pilot project is not coherent with the government's priorities, which are to improve assistance for users who require home care," the statement said.

The ministry said it is, however, open to studying other models of care for people with disabilities being developed elsewhere — in Ontario, for example.

"This work will continue to evolve as quickly as possible, given the current context," it said.