Flush with cash, the Quebec government will pour more money into health care and education this year, while also trying to convince Quebecers it is serious about reducing greenhouse gases.

But environmentalists question level of commitment, with bulk of money not allotted until 2nd mandate

Flush with cash, the Quebec government will pour more money into health care and education this year, while trying to convince Quebecers it is serious about reducing greenhouse gases.

In the annual spending plan, tabled Tuesday in the National Assembly, Finance Minister Eric Girard reported a $1.9 billion surplus last year, thanks in part to a booming economy.

The Coalition Avenir Quebec government, often criticized for its lack of concern for environmental issues, said it would devote $6.7 billion over six years to deal with climate change.

Only $322 million of that, however, will be spent this year, prompting skepticism from environmentalists.

The CAQ said it's committed to meeting the emissions target set by the previous government: a 37.5-per cent reduction from 1990 levels by 2030.

Girard also acknowledged the province's cap-and-trade system won't be enough to curb emissions, saying that more needs to be done to "electrify the economy."

To that end, Girard set aside $15.8 billion for public transportation projects in Quebec's 10-year infrastructure plan.

"Obviously, Quebec cannot reverse climate change on its own. However, we must do our part, and the government will oversee this collective effort," Girard said in an advance copy of his budget speech.

The government also renewed a popular tax rebate for the purchase of electric cars, dubbed Roulez Vert, and a program (Chauffez Vert) to encourage homeowners to switch to a renewable energy heating system.

But Quebec will still need to substantially cut emissions in the transportation sector in order to meet its 2030 target.

Currently, about 44 per cent of Quebec's greenhouse gas emissions come from the transport sector, especially fossil fuel-burning cars and trucks.

Patrick Bonin, a climate campaigner with Greenpeace Canada, said the budget doesn't contain enough measures to curb emissions, and devotes too much money to building roads, as opposed to expanding public transit.

"Overall, when you look at what is on the table, it's far from what is needed to counter the climate emergency," he said. "We're quite skeptical that Quebec is on the way to meeting the targets of the Paris accord."

Montreal Mayor Valérie Plante, who has made fighting climate change key to her own mandate, said she was "pleased to witness an important shift" toward public transit. But she also said she was disappointed that the government did not commit to build any new social housing in the city as its vacancy rate hits a 15-year low.

"We cannot ignore the immediate housing needs of thousands of Montrealers," Plante said.

WATCH: Finance minister breaks down the budget by the numbers 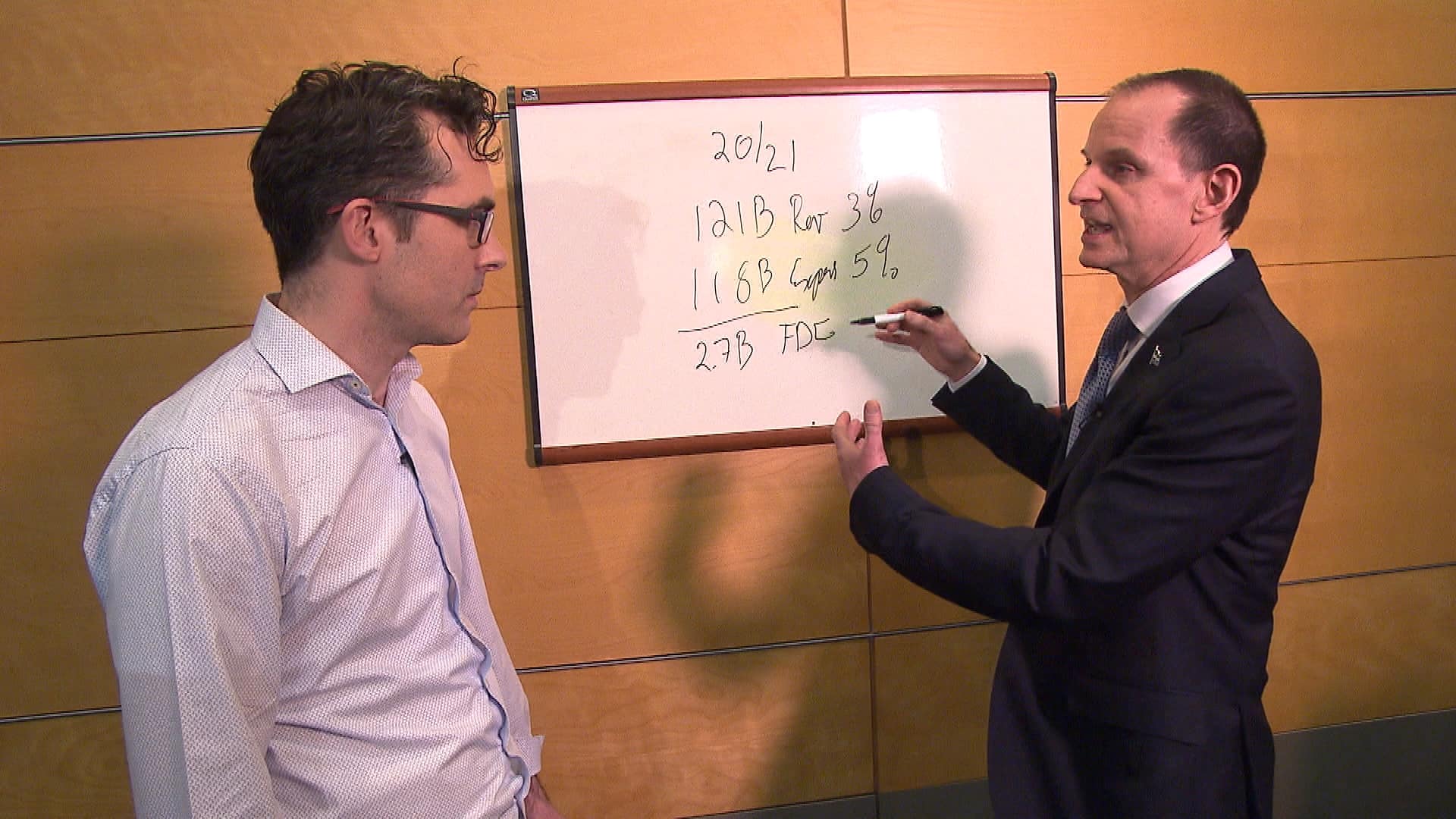 Breaking down the Quebec budget

The budget was tabled in the midst of global economic uncertainty, sparked by fears of the coronavirus and volatile oil prices.

But Girard's budget was prepared before stock prices dropped dramatically on Monday.

A line in the document acknowledges the COVID-19 epidemic could hinder economic growth, but otherwise maintains Quebec's finances make it "resilient to economic disruptions."

Speaking to reporters on Tuesday, Girard said the province is prepared for any impact on the economy or the health-care system.

"We will see what the evolution of the virus is," he said.

Carlos Leitão, the finance critic for the Liberals, said the budget "lacked prudence."

He said the two per cent growth forecast was aggressive given global uncertainty, and that the budget didn't contain sufficient "provisions for risks."

He suggested a "mini-budget" could even be necessary in the coming months to address the lack of foresight seen in Tuesday's plan.

Here are some other key takeaways.

In all, the plan devoted $15.8 billion for public transportation projects in six cities across the province, including Montreal's light-rail network, an extension of the Metro's Blue line and the possible extension of the Yellow line. There was no mention of adding a new Pink line to the network, an idea long championed by Plante.

The road network, meanwhile, was allotted $26.8 billion. Environmental groups had pressed the Legault government to devote equal money to roads and public transit.

Improvements to education infrastructure, such as schools, was allocated $25.5 billion, while health and social services got $20.5 billion.

Despite the focus on the environment, the biggest spending areas in the provincial budget remain health care and education.

Education spending is going up by 4.5 per cent, while health-care expenditures are increasing by 5.3 per cent.

In education, the CAQ says it will add 350 more pre-kindergarten classes for four-year-olds, bringing the total to more than 1,000. The government will also put $126 million toward helping students with special needs, and promised 6,000 more subsidized daycare spaces within two years.

Caregivers get a break

Much of the new health-care money is going toward improving primary care services. But it also includes a commitment to add 900 beds to long-term care facilities, and $450 million over five years to hire more staff in the province's beleaguered youth protection system.

The CAQ moved closer to standardizing the school tax rate across the province, which was a key election promise. That means homeowners in certain regions will save hundreds in the coming year. Someone who owns a $275,000 condo in Montreal, for instance, will eventually save $182 compared to the 2018 rate, while someone who owns the same priced home in Mauricie will save $509.

The CAQ also created a new tax credit to encourage businesses to invest in innovation — at a cost of $526 million over five years.

The CAQ set aside $200 million over five years for Indigenous peoples. This money is aimed at following through on the recommendations of the Viens commission and the National Inquiry into Missing and Murdered Indigenous Women and Girls.

The promise came with few specifics, but Girard said that was by design. He said Indigenous groups should determine their funding priorities.