Quebecers will see a bit more money in their pocketbooks thanks to the 2017 Quebec budget. But will the tax relief make up for the pain for the austerity years?

Small tax cuts and bigger-than-expected increases for health and education will drive Quebec government spending in 2017.

The Liberal government's fourth budget, tabled Tuesday, continues an effort begun last year to ease the pain of the austerity measures that marked the beginning of its mandate.

In his speech before the National Assembly, Finance Minister Carlos Leitao called it a good news budget that is "sustainable and responsible" — one that balances "renewed hope" with prudence.

The showcase element for the Liberals, who campaigned on promises of tax cuts, is the retroactive elimination of the so-called health contribution.

Its abolition for 2017 was announced last fall. Now Quebecers earning less than $134,095 won't have to pay their 2016 contribution, which will put between $50 and $175 back in their pockets this year.

That retroactive payout was one of the worst-kept secrets in Quebec City in the weeks leading up to the budget.

But surprising most observers was additional income tax relief in the form of an increase to $14,890 for the zero-tax threshold.

That translates into an income tax cut of $55 for every taxpayer. As Coalition Avenir Québec finance critic François Bonnardel pointed out, that's not quite enough to cover a weekly cup of coffee at Tim Hortons.

Education and health were among the sectors hardest hit by lean budgets tabled in 2014 and 2015.

But for many who work in those fields, the reinvestment won't compensate for the funds lost in previous years.

"If we look at the new money that is put in the education system this year, it's only $170 million," said Pierre-Antoine Harvey, an economist with the CSQ, one the province's largest teacher unions.

"That's not enough. We're talking about $800 million in cuts in the last seven years of Liberal governments."

Overall, Quebec's consolidated expenditures are slated to increase by 3.8 per cent for 2017-2018, compared to last year's increase of 4.5 per cent.

But 2015 also represented a turning point in Quebec's wrestling match with public debt. Since then, the province's gross debt as a percentage of GDP has declined, and it's projected to continue decreasing into the near future.

Even if this year's budget doesn't entirely make up for past cuts, some public finance experts believe it buttresses the government against potential downswings in the global economy.

"This government is doing something responsible; it's giving itself some wiggle room if things go south," said Marie-Soleil Tremblay, professor at the École Nationale d'Administration Publique.

Leitao's budget also puts measures in place for several major public transit projects, which the finance minister hopes will have long-term benefits for the province's economy.

The most glamorous and ambitious of these projects is the $6 billion light-rail project for Montreal, spearheaded by Quebec's public pension fund, the Caisse de dépôt et placement.

The Caisse has already committed $2.7 billion. In Tuesday's budget, Quebec promised to fork over $1.3 billion. But none of that will be spent for another five years.

Quebec is waiting anxiously for Ottawa to match that commitment, an announcement likely to come later this year. The rest will be made up by a contribution to the electrification of the network by Hydro-Québec, as well as various real-estate taxation schemes.

With much of the funding now solidified, construction on the 67-kilometre network is scheduled to get underway this year. Leitao was brimming with confidence about the project.

"It will meet users' expectations and be an exceptional showcase for Quebec know-how," he said in his budget speech.

Along with the LRT, Leitao's budget also brings the much-discussed extension of the Montreal Metro's Blue line one step closer to reality.

Funds for the extension, while not in this year's budget, will be factored into the government's ten-year infrastructure plan. The same was done for a proposed bus rapid transit system in the greater Quebec City area.

The Liberals will table one more budget before heading to the polls in the fall of 2018. Leitao's prudent budgets of the past two years are likely to be a central plank of their re-election platform.

For partisans of the government, Leitao has managed to rein in spending and debt costs. With large-scale reinvestments in public transit on the horizon, and a competitive edge in technology, Leitao says he has positioned the province for the future. 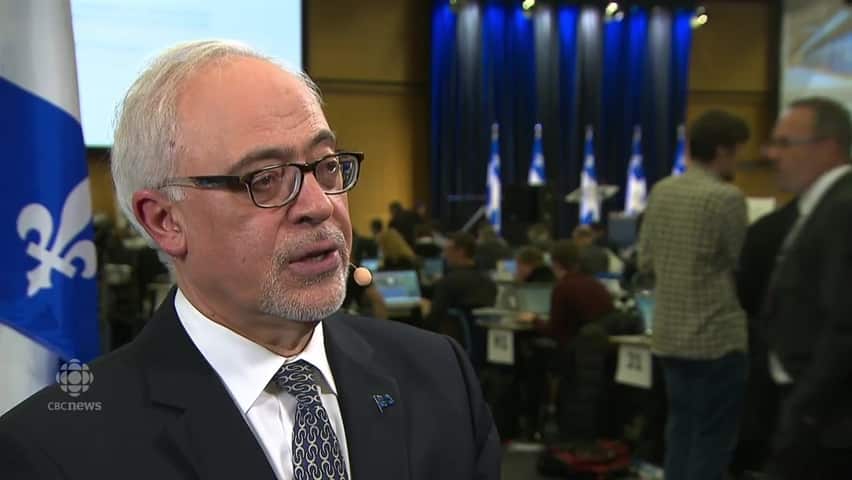 'We needed to put the house back in order,' Quebec finance minister says

4 years ago
0:53
The Liberal government's budget continues an effort begun last year to ease the pain of the austerity measures that marked the beginning of its mandate. 0:53

Making debt payments a priority, while being stingy with spending, amounts to fiddling while Rome burns, the Opposition said.

"We want the whole surplus to be reinvested in services," said Nicolas Marceau, the Parti Québécois finance critic, himself a former finance minister.

"The cuts of the last three years were tremendous … They're trying to repair the damage. But it's only a partial repair."

François Legault, leader of the Coalition Avenir Québec, derided the government's "stop-and-go" approach to spending as a cheap electoral ploy.

"It's a way to try and win some votes," Legault said. "It's bad management."

The National Assembly will spend the next several weeks studying the budget before it comes up for a vote.