Canadian soldiers have built a tent village near the United States border to accommodate the influx of asylum seekers crossing into Quebec.

Canadian soldiers have built a tent village near the United States border to accommodate the influx of asylum seekers crossing into Quebec.

The camp will be able accommodate up to 500 people in Saint-Bernard-de-Lacolle, Que., and consist of "modular tent shelters with floors, lighting and heating," the Armed Forces said in a statement Wednesday.

"Setting up tents, this is something obviously we're quite familiar with, we're pretty good at doing this," said Maj. Yves Desbiens, the spokesperson on the ground for the Canadian Armed Forces. "But in terms of these capacities, this is not something we do often."

Authorities have struggled in recent weeks to handle a surge in people coming to Quebec at unofficial crossings such Roxham Road. The RCMP has already set up a tent at the crossing to deal with the arrivals.

Patrick Lefort, a spokesperson for the Canada Border Services Agency, said there are currently 700 people waiting to be processed who have crossed at Roxham Road.

He said the wait is two to three days and there are currently no beds, just benches and chairs.

"Currently we are looking to add some capacity to process the claims, so we are trying to work to reduce the backlog," he said. 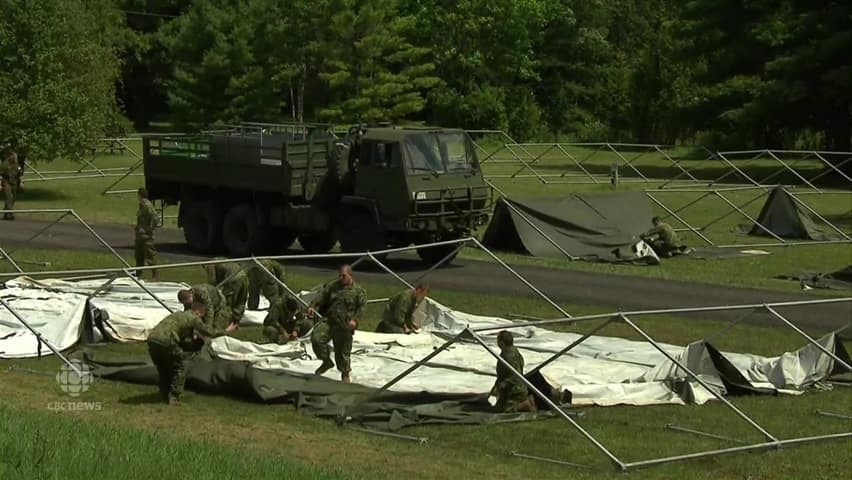 3 years ago
0:43
The Canadian military is building a camp near the United States border to accommodate the influx of asylum seekers crossing into Quebec. 0:43

The camp is located on a converted private campsite, close to where asylum seekers are being processed by the Canada Border Services Agency.

The military is expecting to finish setting up the tents Thursday. Asylum seekers will be provided "all of the amenities that will ensure the dignity and comfort of the people being housed," Desbiens said.

The majority of the soldiers will return to their home bases once the camp is completed, and won't play a role in security matters. The request for the camp was made by Public Safety Canada.

Quebec is also facing logistical challenges in providing schooling, accommodation and other services once asylum seekers get to Montreal.

The cavernous Olympic Stadium is already being used to house people, but it will not be available as of next month, officials said at a news conference.

The city's old Royal Victoria Hospital, which closed in 2015, will also be opened up to new arrivals.

Francine Dupuis, who oversees PRAIDA, the provincial organization that helps asylum seekers in their first months, said the building will accommodate an additional 320 people.

Dupuis told the news conference the situation is under control — and not all the shelters are full yet — but that more space was needed to accommodate the continued influx.

Many of the recent refugee claimants crossing into Quebec are Haitians who have been living in America for years but now face deportation.

In May, U.S. President Donald Trump announced that he would not be extending temporary protection status for Haitian nationals past January, when it's set to expire.

It was granted after the 2010 earthquake, but now the Department of Homeland Security considers Haiti to be a safe country.

There's no guarantee that Haitian asylum seekers will be able to stay in Canada. To be successful, a claimant must demonstrate he or she has a legitimate fear of persecution, war or other violence in their country of origin.

Immigration Canada said the number of asylum seekers crossing illegally near the Saint-Bernard-de-Lacolle border crossing has quadrupled in the past two weeks from about 50 a day to 200 a day.

Montreal's French-language school board is also gearing up to start enrolling children in classes by the end of the month.

With files from Alison Northcott and Marilla Steuter-Martin