SLĀV, performed by Betty Bonifassi and directed by Robert Lepage, is described as "a theatrical odyssey based on slave songs." The Jazz Fest is standing by the show.

Dozens of protesters gathered outside the Théâtre du Nouveau Monde on Ste-Catherine Street Tuesday evening to voice their opposition to the Montreal International Jazz Festival show SLĀV on the night of its soft opening.

The show, performed by Betty Bonifassi and directed by Robert Lepage, is described as "a theatrical odyssey based on slave songs," but critics are calling it cultural appropriation.

Bonifassi and Lepage are both white, and that's drawn criticism for their project, which brings together "traditional African-American slave and work songs, from cotton field plantations to railroad yards," according to the event listing.

The Montreal chapter of Black Lives Matter has add its voice to the controversy, calling the show "extremely offensive" and urging activists to join the protest.

Pierre Kwenders, a Congolese-Canadian musician who was long listed for the 2018 Polaris music prize and who is also performing at the festival July 6, said he would be joining in the protest, as well.

I’m joining the protest today and we should all do the same. C’est une honte pour Montréal. <a href="https://t.co/EMS4ezF2Zm">pic.twitter.com/EMS4ezF2Zm</a>

"This is cultural appropriation, and we need to think twice before doing this type of thing," Kwenders told CBC.

"You have to take into consideration the people who will be affected by it. And this story you are trying to tell, is it your place to tell that story? Are you telling it the right way?"

Bonifassi declined an interview with CBC, but in a 2014 documentary about her slave songs project that ran on CBC Radio's Sunday Edition, she said as the child of a Serbian mother whose people were enslaved through history by other Europeans, she feels "touched by slavery."

"I'm touched by people who [were] taken and forced to work for others," Bonifassi told CBC's David Gutnick. "We could say we have a link in searching identity. All the Balkan people and all those Black African people from North America have something in common because of that. I understand."

She also defended her show earlier this week in an interview with Radio-Canada.

"I work from the heart. I don't see colour in my life. I've spent my life with people who come from all over," said Bonifassi, who shot to fame in 2003 when she sang the Oscar-nominated Belleville Rendez-Vous, the theme song from the animated film The Triplets of Belleville, at the 76th Academy Awards.

Lepage and Bonifassi released a joint statement in response to the backlash against SLĀV on Tuesday evening. 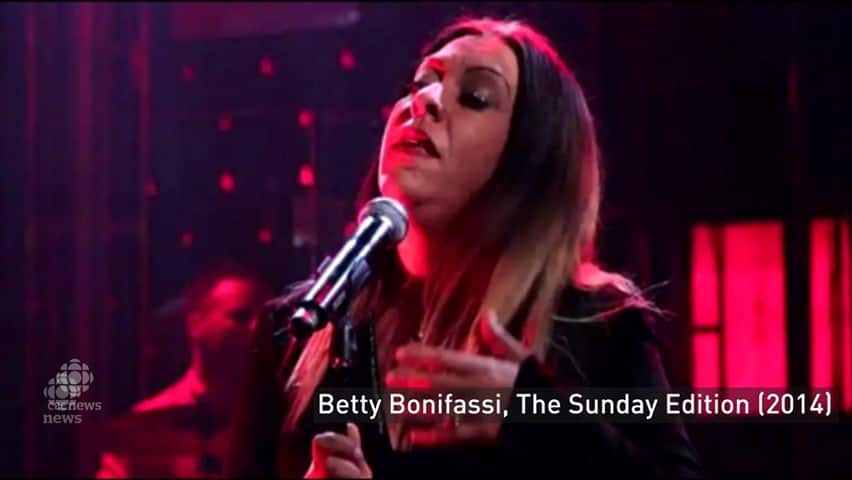 Betty Bonifassi talks about her slave song project in 2014

"Yes, the history of slavery, in all its various forms, belongs first and foremost to those who have been oppressed and to the descendants of those people," reads the statement.

"But this history was written by the oppressors as much as by the oppressed, by whites as well as by blacks. And it's necessary to continue the dialogue about this difficult period, first to bear witness, but also to avoid repeating it in the future."

In a statement Wednesday, the Jazz Fest said it's standing by the show.

"We are truly fortunate that artists as talented and recognized on the five continents as Betty Bonifassi and Robert Lepage – in his very first collaboration – have chosen the festival to present this show as a world premiere," the festival said in a statement.

"Before subjecting them to trial by public opinion, we firmly believe that we must wait and witness the show they will present to us all."

The statement said that, for 39 years, the Jazz Fest "has been synonymous with a global village where there is no race, no gender, no religion and all human beings are equal."

So far, five of 16 shows are already sold out.

With files from CBC's Simon Nakonechny