New legislation introduced by Quebec's minority Parti Québécois government would add new restrictions on the use of English in the workplace and access to English schools. 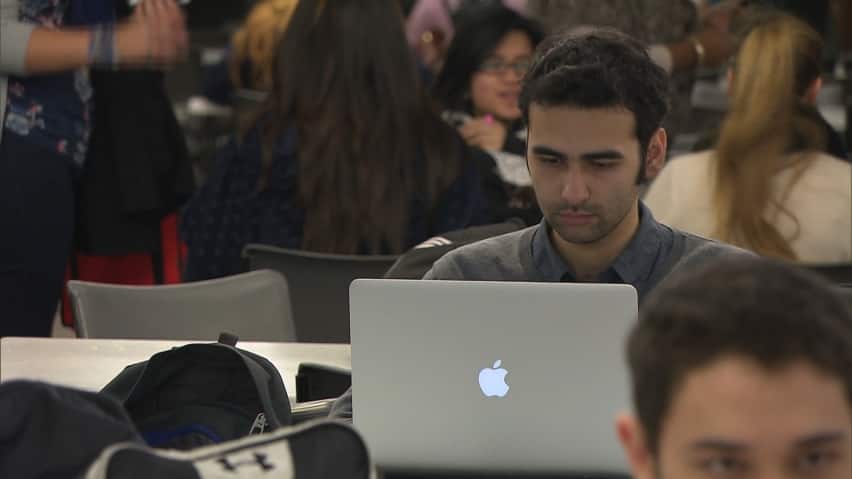 8 years agoVideo
2:34
Passing a French exam would be a challenge for some CEGEP students in Montreal 2:34

New legislation introduced by Quebec's minority Parti Québécois government would add new restrictions on the use of English in the workplace and access to English schools.

Among the proposals in the new Bill 14 is the widening the types of businesses that are required to comply with the rules set out in the French Language Charter. Currently, Bill 101 only applies to companies with 50 or more employees. The changes would mean it would apply to businesses with as few as 26 employees.

It requires companies to implement "francization measures" that include the use of French in meetings and internal communications, and training on any new software or other work tools that are changed to comply with the legislation.

Companies that provide goods or services would be required to implement further measures, including adjusting work schedules and evaluating an employee's level of French, to ensure customers are served in the province's official language.

Bill 14 also makes vague reference to closing a loophole that allows students who aren't otherwise eligible to attend English public schools to do so by first attending a private school.

"The same rule applies to instruction in English received as a result of trickery, deception or a temporary artificial situation the sole purpose of which is to circumvent the provisions of this Act," the bill reads.

When it comes to French in schools, the PQ wants to add a requirement that children attending public day care be "familiarized" with the French language.

In order to graduate from CEGEP, students will also need to demonstrate a knowledge of spoken and written French at a level deemed appropriate to function in French-speaking Quebec society.

Amendments to the Charter of the French Language:

Amendments to the Charter of Human Rights and Freedoms:

During the campaign for the September election, the PQ promised to widen the scope of Bill 101 to include smaller companies with the aim of further protecting the French language, originally pledging to require that all businesses that employ more than 10 employees to use French in all staff communications.

The proposal was met with opposition. In September, members of Montreal's anglophone community protested in front of Quebec's National Assembly to oppose the PQ's intentions to reinforce the language law.

Following the vocal opposition to its planned changes, the PQ has stepped back from the platform promise.

The Charter of the French Language was originally adopted in 1977 to reaffirm that Quebec's common language is French.