Point of View: I've been a journalist for 35 years — the Polytechnique massacre left a scar on all of us

It took decades for the massacre to be recognized as a targeted, anti-feminist attack. Montreal is still struggling to understand the violence on Dec. 6, 1989.

I rushed out not knowing if, through static, the police scanner said 'fire' or 'gunfire' that horrible night

I have a bike loop I do a couple of times a week all summer, riding up Mount Royal on Camillien-Houde Way to Côte-des-Neiges Road and then up some more, through the University of Montreal campus.

It's a long, hard climb, and just as I start my descent, every single time, I deke right, over to the Polytechnique building, and I stop for a moment at the bronze plaque near the entrance.

I committed those names to memory 30 years ago, in alphabetical order, beginning with Anne-Marie Edward, a childhood friend of my son's father. Keeping this ritual, acknowledging their existence, seems like the least I can do.

My lungs are close to bursting by the time I've biked hard up to this spot. And what I think is, "This is what it feels like to be alive." And then, "Where would you be, each of you? What would you be doing?"

There are tidbits I know about them, committed to memory over the years.

Barbara Klucznik-Widajewicz was Polish, like me. She'd immigrated with her husband just two years before. We were the same age.

Sonia Pelletier was the youngest of eight children, from a tiny village in the Gaspé. She was to have graduated from mechanical engineering the very next day.

Geneviève Bergeron, 21, was the daughter of a Montreal city councillor, Thérèse Daviau, and babysat the mayor's kid.

They would be in their 50s now, at the peak of their engineering careers, in senior positions. Mothers. Perhaps grandmothers, even. My peers.

I was 30 on Dec. 6, 1989. I had come to Montreal from out west to work for CBC News just three months before. As a rookie, I got the night shift. When the police scanner in the newsroom started going nuts, just before 6 p.m., the radio section was deserted, except for me.

"It sounds like a fire," said the editor on the desk.

It was notoriously hard to eavesdrop on those old police scanners. You had to know the codes. There was a lot of static. Did we miss "coups de feu" (gunfire) and hear only "feu?" You could only tell from the level of activity and the tightness in the dispatcher's voice that whatever was going on, it was too big to ignore.

I grabbed my coat and boots, my tape recorder and the brick that was the 1989-era cellphone, and I ran for a cab. But mentally, I was ill-prepared.

I had never been on the U of M campus before. I remember the cab heading up and up and up, as I peered out the passenger window, looking for smoke, flames — some sign of a fire.

The driver dropped me off as close as he could get to the Polytechnique building, and I ran through icy puddles, straight toward chaos. People were huddled outside the building, snow in their hair, some not wearing coats.

I approached some young men and asked what had happened. 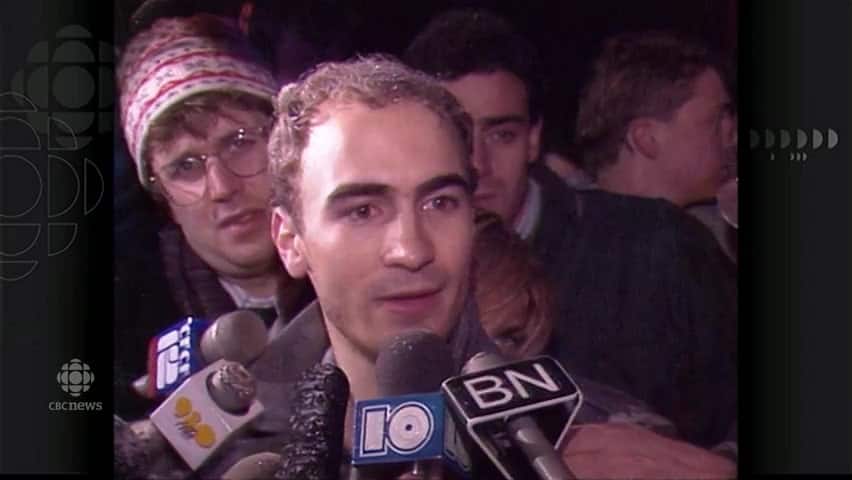 ARCHIVE: The students, parents and school administrators react to the Polytechnique massacre.

They had been in a classroom when the gunman burst in, interrupting someone's slide presentation.

"He divided the men from the women. He sent all the men to one side of the room."

I listened intently, but my brain didn't compute. I made them repeat what they had said.

I'd only been in Quebec a few months, and though I thought my French comprehension was pretty good, at this moment, it failed me.

Then my colleague Lynn Herzeg arrived with her camera operator.

"Thank God you are here," I said. "You have to talk to these guys. I don't understand what they're saying."

I realize now that even after nearly six years as a reporter, nothing had prepared me for what I was hearing. I simply could not process their words.

Thirty years have passed. Half of my life. But so much of that evening is fixed in my memory. I still see this: Police Lt. Pierre Leclair giving us the briefest of scrums on his way into the building, promising to be out again to answer questions as soon as he had a better idea of what had happened. We waited and waited.

Leclair walked through the hallways, past the carnage and into a third-floor classroom, where he found his own daughter dead. The killer's body was nearby. As Leclair told the Globe and Mail years later, Marc Lepine had stabbed Maryse to death when his bullet didn't kill her. Then, as if the horror that he'd inflicted had only just occurred to him, he muttered, "Oh shit," and turned his gun on himself.

"I will never forget how that police officer recognized his daughter," said Herzeg, when I called her up the other day to commiserate over those long-ago events.

"He knew her by the sweater she was wearing. He had given it to her as a gift."

Is that even true? Memories can grow into myths over decades. But the memories of stomping our soaking-wet feet all night as they went numb with cold, the sound of the sirens, the sight of injured women being trundled out of the building on stretchers and into the yawning back doors of the ambulances are as clear today as if it happened yesterday.

Cellphone connections were tricky in 1989. Batteries bled dry quickly in the cold. Getting on the radio as soon as any fact was confirmed was critical, but my first report was just a few lines into The World at Six: There'd been a shooting on the campus of the University of Montreal. More details to follow.

At 7 p.m., I reported that there might be a second shooter. A professor got hustled off by police. It turns out he had been running away, just like everybody else.

(People at the scene of shootings often think there is a second shooter. There almost never is. Fifteen years after Polytechnique, on Sept. 13, 2006, I was at Dawson College. Another shooting. I was caught in a near-stampede, students running in all directions, yelling that there was a second shooter. That, too, turned out to be false. Eighteen-year-old Anastasia De Sousa was shot to death in the school cafeteria, before the gunman turned his gun on himself.)

My television colleagues did a marvellous job. Everyone pitched in — producers who hadn't been on air in years reported live all night, by phone, at first, as the footage was driven back to the station. 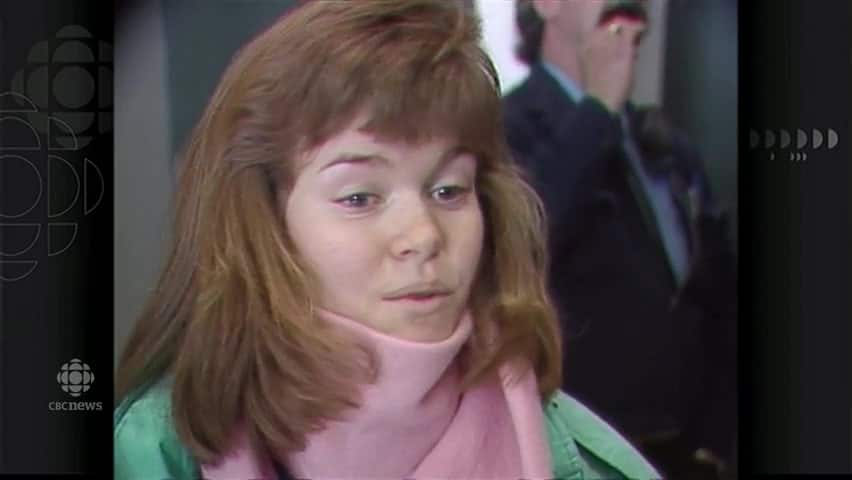 ARCHIVE: The day after the Polytechnique massacre, students are unsure how to keep studying.

It was the first big test for Newsworld, CBC's brand-new, round-the-clock news channel. RDI, the French-language news channel, didn't yet exist. And Quebec's cable TV providers hadn't yet agreed to include the English-language channel in their packages. So while my friends and relatives in Winnipeg, Vancouver and Edmonton sat mesmerized around their televisions as the news unfolded, in Montreal, many people didn't find out what was going on until they turned on The National at 10 p.m.

My radio colleagues Carol Off and Jean Laroche were in Upstate New York or Vermont when the massacre happened, covering hearings on the Hydro-Québec's proposed Great Whale project, a debate that was raging at that time. They rushed back on wintry roads.

When they arrived, I grabbed a cab across town to the CBC building, stripped off my wet socks and sat on my feet to warm them up, listened to my tape and packaged my news reports for the morning.

At last, I went home to sleep. And as I drove back to the station the next day, the afternoon drive show, Homerun, was just going on air. The host, Dave Bronstetter, threw to Dave Rosen, the traffic guy.

But before Rosen launched into the traffic report, he paused. In a tone I'd never heard him use before, he said he could not start his work day without addressing what had happened. He talked about being the father of a daughter and how hard it was to accept that any man could deliberately target these young, smart women who were not afraid to venture into what was traditionally a man's field.

I was still in my car, and I had to pull over, blinded by tears. I sobbed.

Rosen was right. I was not the same. None of us were.

Fear of the word 'anti-feminist'

"He said, in French, 'You are a bunch of feminists.' And he started to shoot."

Those are the exact words spoken by one eyewitness, less than an hour after the massacre.

Yet at the time, officialdom at the City of Montreal, at the University of Montreal and other institutions refused to publicly call the massacre what it was: An anti-feminist attack.

Institutions fear being labelled, fear being known only as "that place where the misogynist terrorist went on a rampage."

But it's been 30 years. As for the killer — pick your label: crazy, a terrorist, the victim of family violence himself; in fact, all three — what he did was a pointless act of futility. The torch has been passed on to another generation of female engineers, as smart, confident and promising as the ones who were lost.

And times have changed. There is the vast #MeToo movement. Montreal has a female mayor, Valérie Plante.

And at last, 30 years later, the reluctance of officialdom to call what happened what it was has been made right. A new sign has just gone up in the Place-du-6-décembre-1989, a memorial park at the base of the U of M campus, on the corner of Decelles Street and Queen Mary Road.

The old sign said only that there had been a tragedy.

The new sign states that 14 women were murdered in an anti-feminist attack at École Polytechnique on Dec. 6, 1989. It condemns all forms of violence against women.

At last, every visitor will know exactly what happened and why. 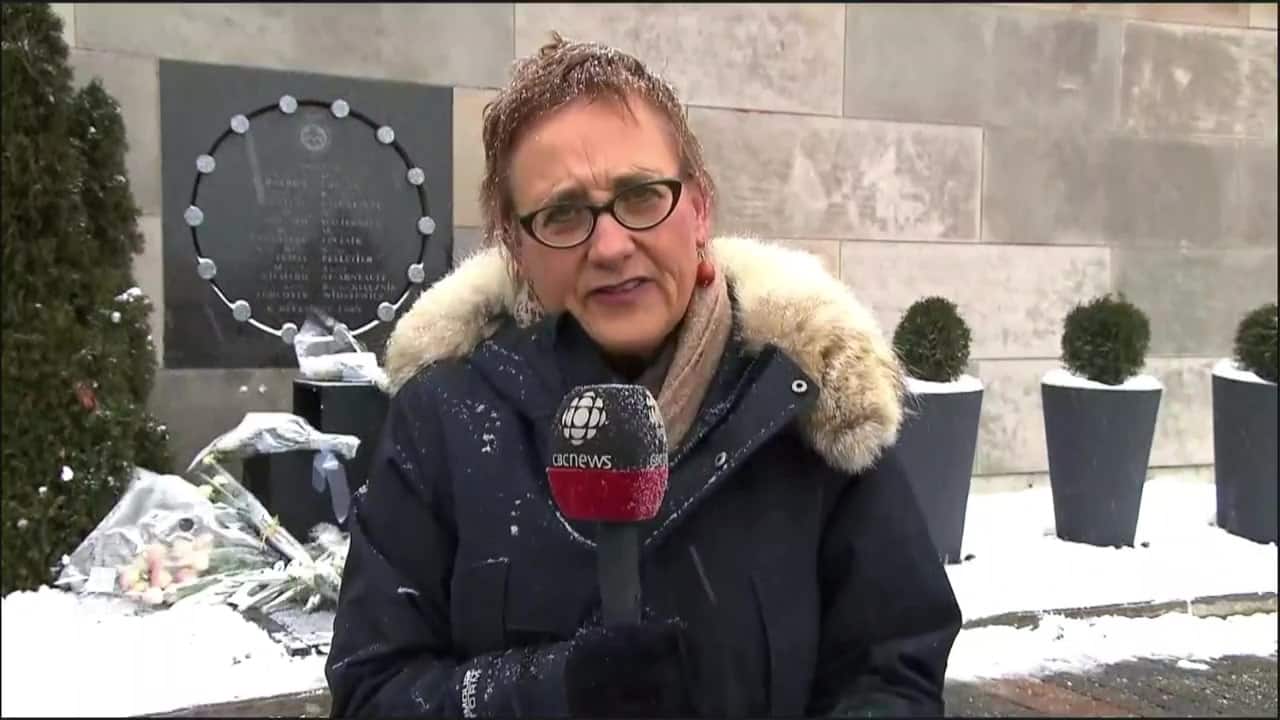 1 year ago
11:34
CBC journalist Loreen Pindera, who covered the Polytechnique shooting, remembers that night and can still feel the ripples of the event. 11:34