At huge anti-racism demonstrations in Quebec, premier called out for downplaying problem

The rebuke to Premier François Legault's claims that there is no systemic racism in Quebec came in the form of a massive demonstration in Montreal on Sunday, where thousands of Black people joined with other minorities to demand an immediate end to police harassment and other forms of discrimination.

The rebuke to Premier François Legault's claims that there is no systemic racism in Quebec came in the form of a massive demonstration in Montreal on Sunday, where thousands of Black people joined with other minorities to demand an immediate end to police harassment and other forms of discrimination.

Sizeable protests were held Sunday in other cities across the province as well, with crowds gathering outside the National Assembly in Quebec City, and in Sherbrooke. Organizers of an anti-racism demonstration in Rimouski, Que., said they attracted 1,000 people.

As anti-racism demonstrations have swept across the United States, Legault was asked repeatedly last week whether he believed systemic racism was also a problem in Quebec.

He replied that while a small number of Quebecers were racist, there was "no system in place that discriminates."

At a rally in Montreal before the march, several speakers criticized Legault for attempting to downplay Quebec's problems with racism. They also spoke about their own experiences with racial profiling at the hands of police.

"The major issue we have here in Montreal is that our premier seems to think that we don't have a systemic racism issue here," said Svetlana Chernienko, an activist and mental health advocate.

She spoke of being harassed by police as a teenager and told the crowd she sometimes warns her son not to wear a hoodie or style his hair in cornrows.

Amina Diallo said she came to the protest because Legault's comments were like "a big slap in the face."

"I'm so mad," she said. "He talks like he knows it all, like he is one of us. He has no idea about our life experiences."

At the protest in Quebec City, the rapper and historian Webster suggested Legault change his first name to Mamadou, "and then send around his CV to see what happens." 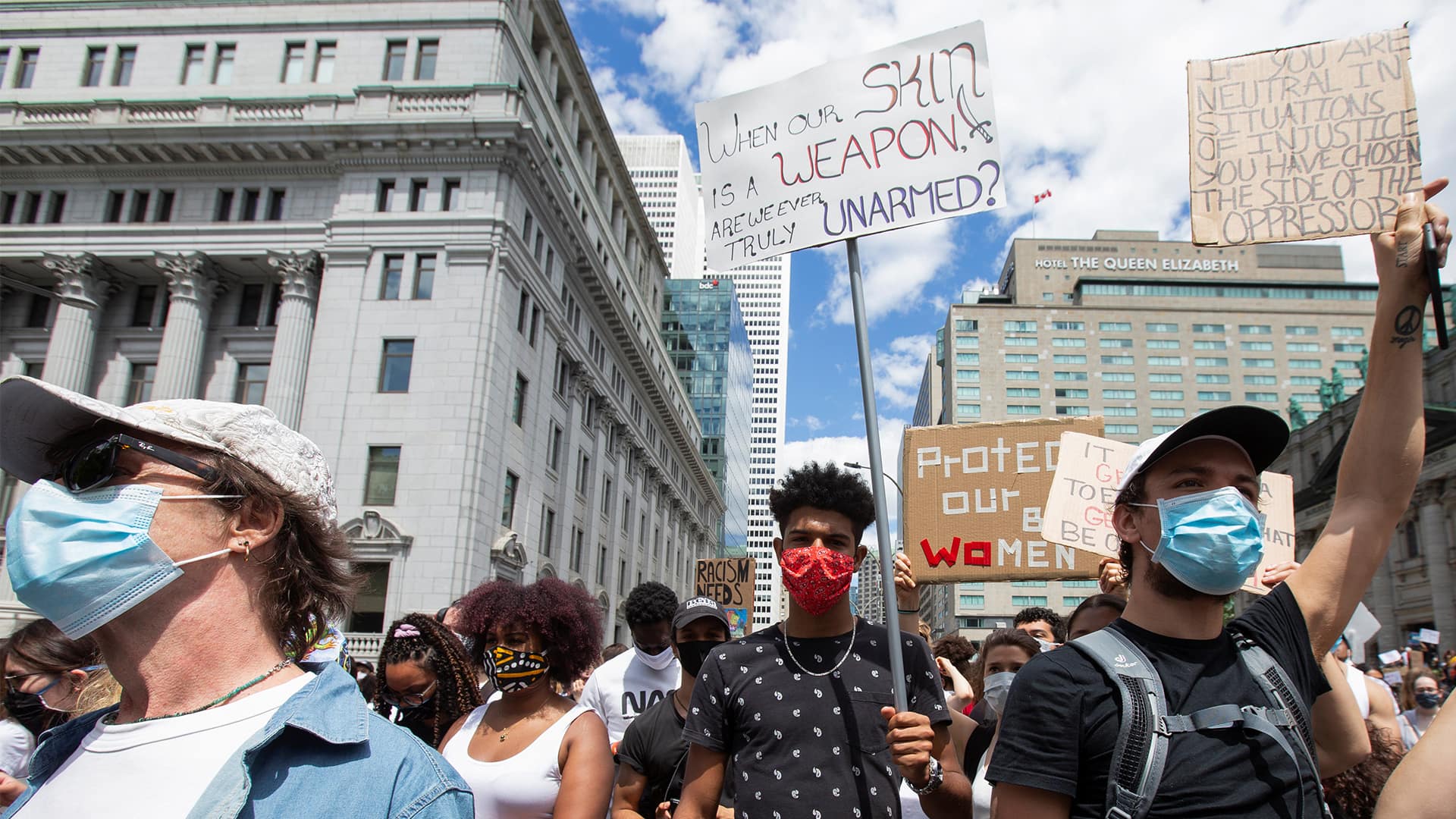 8 months agoVideo
2:04
Tens of thousands of people took part in a mostly peaceful anti-racism protest in Montreal Sunday, one of the biggest yet in Canada. 2:04

'A big problem with systemic racism in Quebec'

As they marched through Montreal's downtown core, the Black participants spoke about how they try to avoid attracting police attention, or have witnessed others getting pulled over for no reason.

"Every single time I see cops passing, I always feel this stress in me. I'm always scared they'll stop and ask me what I'm doing in my own neighbourhood," said Sonia Kikunbule, an 18-year-old who plans to attend Concordia University in the fall.

"There's a big problem with systemic racism in Quebec," said Ali Nestor, a boxer and community organizer in Montreal North.

"There's also a big problem with police brutality and discrimination. The message is clear. The people are demanding a change of the system. We want equality for everyone."

While a large demonstration was held last week in Montreal, Sunday's event seemed to be even larger.

Demonstrators — most of them wearing masks due to the COVID-19 pandemic — chanted "Who has the power? We do!" in French and "I can't breathe" in French and English.

Many held signs honouring George Floyd, the 46-year-old man whose death last month at the hands of police in Minneapolis, Minn., has galvanized the anti-racism movement, not only in the U.S., but across the world.

In Montreal, there were signs too for Black Montrealers who have died during encounters with police, including Pierre Coriolan and Nicholas Gibbs.

"This time there's a good chance it will go all the way, because the whole planet is concerned," Nestor said.

Around 6 p.m. ET, after the march was over, police used tear gas to disperse some remaining protesters in Old Montreal.

Montreal police spokesperson Manuel Couture said some protesters had fired projectiles at police. One person was arrested for uttering threats to cause death or bodily harm. 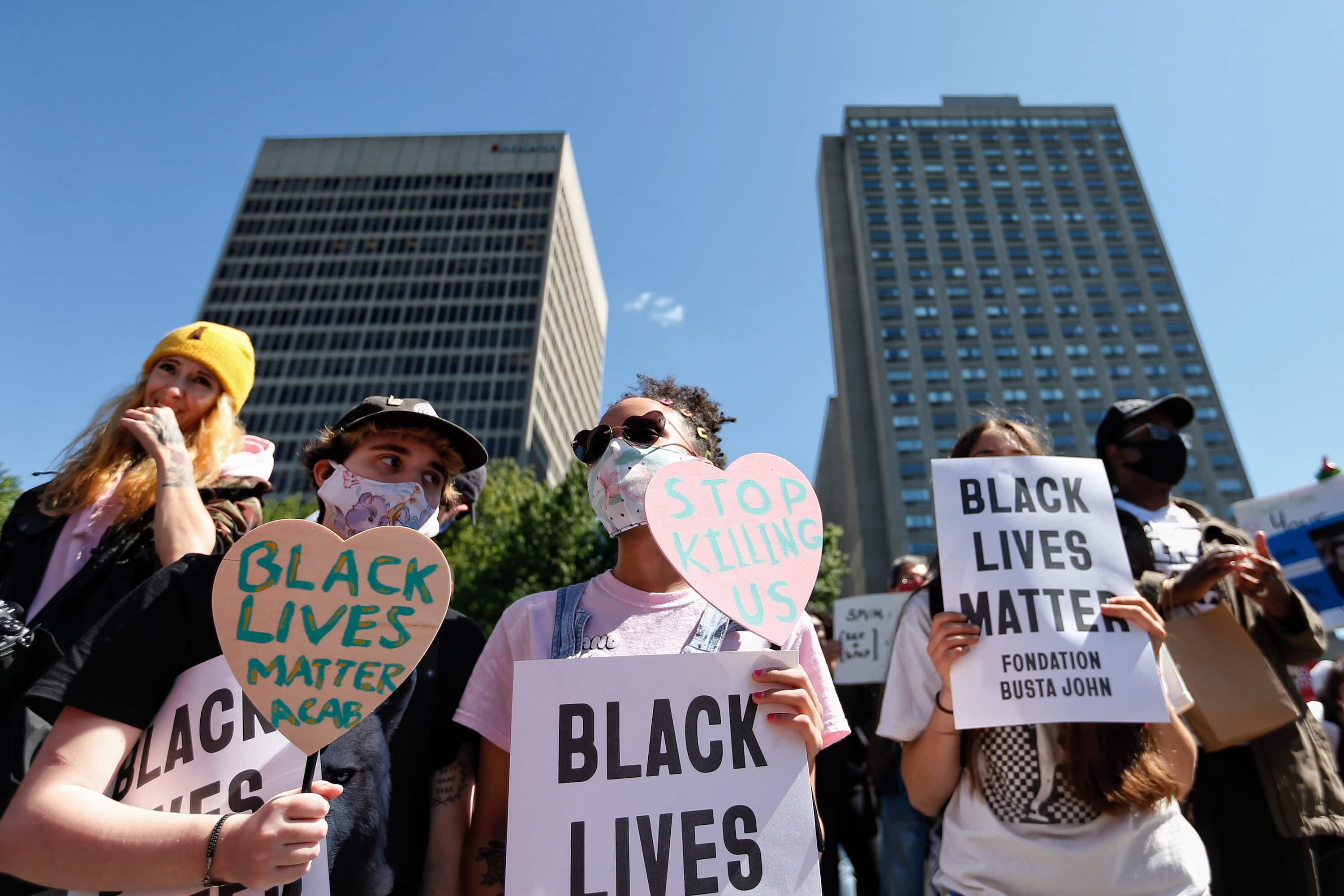 8 months agoVideo
1:34
The peaceful protest was one of many that took place across the country on Sunday. 1:34

Race and the political divide

"Each time one of us experiences discrimination, it's a concern for the whole society," she told the crowd that had gathered before the Montreal march.

MNAs from Québec Solidaire were also present at the demonstrations in Montreal and Quebec City.

Their presence underscored the political divide in Quebec over the systemic racism issue.

Both the governing Coalition Avenir Québec and the Parti Québécois deny racism is a systemic problem. While at least two CAQ cabinet ministers did attend protests on Sunday, they did not address the crowd beforehand.

Last fall, an independent study commissioned by the City of Montreal showed that Black and Indigenous people are four to five times more likely to be stopped and asked to identify themselves by police.

It is only one among several recent studies that have collected evidence suggesting systemic discrimination is as widespread in Quebec as elsewhere in Canada.

The Viens commission report, released last year, concluded it is "impossible to deny" Indigenous people in Quebec are victims of "systemic discrimination" in accessing public services. 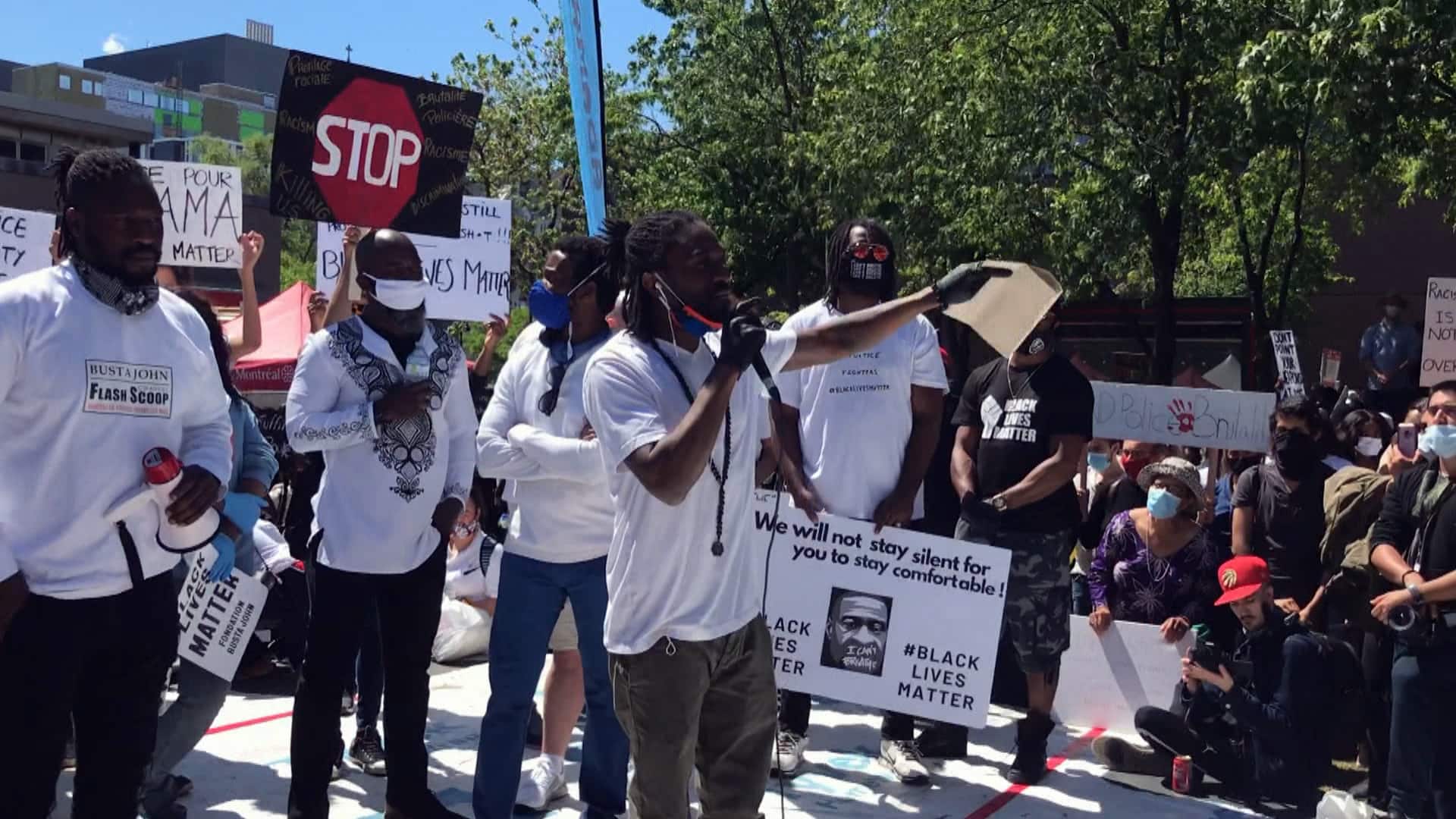 'Let this be the last march,' says protest organizer

8 months agoVideo
0:49
The demonstration in Montreal is one of many anti-black racism protests that took place across Canada this weekend.  0:49

Even though authorities in Quebec have thus far been slow to take action on these issues, the pressure to do so has mounted significantly in the last week.

Caron had initially accepted an invitation from organizers to take part in Sunday's march. But the invitation was withdrawn after many in the Black community said they would be troubled by his presence.

The organizers of the demonstration, the group Nous sommes la ligue des noirs nouvelle génération, said more evidence of change was needed before Caron would be welcome at a similar march in the future.

Many left Sunday's demonstration, among the largest in Montreal in the last year, feeling like momentum was finally on their side.

"Seeing all these people here is giving me hope that change will actually come," said Kikunbule. "I've never seen this in my entire life. It's on its way. Change is coming."