A West Island certified massage therapist is urging Montreal police to examine how they handle complaints of unwanted sexual behaviour after an officer seemed to try to dissuade her from filing a report and repeatedly told her to not be "emotional."

A West Island certified massage therapist is urging Montreal police to examine how they handle complaints of unwanted sexual behaviour after an officer seemed to try to dissuade her from filing a report and repeatedly told her to not be "emotional."

Claudia Cavaliere, 20, was a few months out of massage therapy school when she found herself alone in a room with a client at a spa on St-Charles Boulevard last month, and in a situation that quickly degenerated.

She said she was massaging the middle-aged man's leg when he started grinding his pelvis on the table. She said he then turned over and masturbated in front of her. He said nothing to her except to demand a tissue.

"I didn't know what to do. I just froze," she said. Eventually, she backed out of the room and was intercepted by a colleague who moved her into another massage room and told the client to leave.

"I couldn't speak. I was hyperventilating. I was crying. I was sitting on the floor in the corner of the room, panicking," Cavaliere said.

The man gave a fake name and a phony phone number, she later learned, and he didn't park in the spa's lot.

'My safety is at risk'

She said the traumatic incident was compounded by the reception at Montreal police's Kirkland detachment as she tried to file a complaint.

Cavaliere said she expected to hear what had happened to her was not acceptable and police would look into it, but that she felt an officer just tried to dissuade her from making a report.

"He was like, 'Well, you know, you have to get ready to appear in court. Do you really want to do that?'" she said.

After first describing the incident and feeling uncomfortable, Cavaliere said she started recording her conversation with the officer with her phone in her pocket.

In the eight-minute recording, the officer repeatedly tells Cavaliere how it will be next to impossible to identify the man, that there will be no investigation if he cannot be identified and that what she encountered is "part of the business." 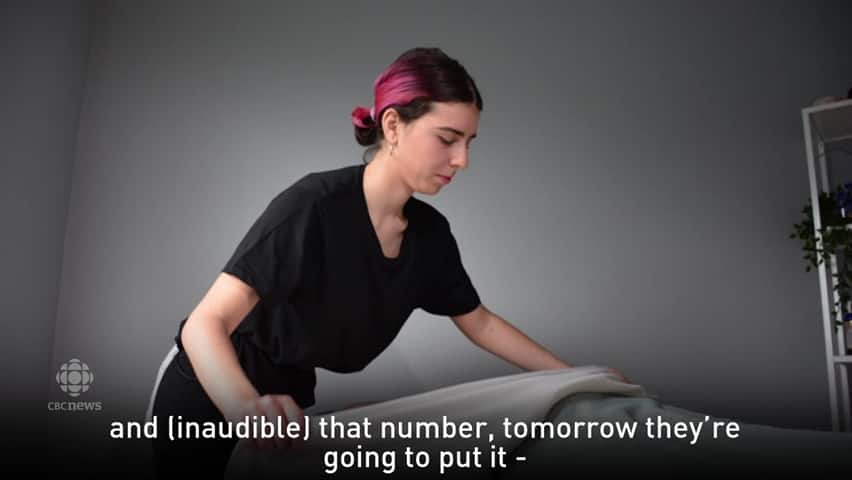 2 years ago
5:55
Massage therapist Claudia Cavaliere recorded her conversation with a Montreal police officer when she went to police to file a complaint over a client's unwanted sexual behaviour. 5:55

The officer also tells Cavaliere the incident isn't considered a sexual offence and, because the client did not demand she do anything or touch her, any conviction wouldn't result in "a harsh punishment," but a $500 fine.

I'm saying, be prepared to have weirdos. You will have weirdos. That's the nature of the business.- Police officer, advising Claudia Cavaliere

He tells her that her spa, which also offers services such as manicures and waxing, is on a stretch of road where "there's a lot of happy endings."

Cavaliere left the station with the form on which to write her statement. But the incident left her questioning whether her concerns were valid and if she should bother going through with her complaint.

"There was a part of me that said, 'No, I shouldn't go back. What's the point of going back? They're never going to catch this guy. I should just try to forget it.'"

Rita Acosta, from Movement Against Rape and Incest, said the police officer's reaction is far too common.

CBC played the recording of Cavaliere's interaction with the officer for Acosta and four of her colleagues.

Acosta said it seemed as if he was trying to discourage her from filing a complaint.

That shouldn't be done, she said, because it could be devastating for a victim — for a woman who has the gumption to call the police and say, 'Listen, this is what happened to me.'"

Acosta said Cavaliere is courageous for going through with her complaint because, after an exchange like the one she experienced, many other women would have been too discouraged to proceed.

She said police need better training on how to deal with women who turn to them for help.

Cavaliere decided to return to the police station and officially file a report after talking to her boss, who told her the spa had surveillance images of the man. She said she met with a different officer, who reassured her, listened to her complaint and helped her file the report.

"All he had to say was, 'This is not your fault,'" she said. "He took the time to ask me questions."

'This is completely wrong,' SPVM concurs

The Montreal police service will not comment on the specific incident, but SPVM Insp. Ian Lafrenière said interactions like these do not look good for the force.

"When I hear stories like that, it makes me very sad," he said.

"It's not a lack of training. Sometimes we have a police officer that needs some discipline or who just lost it on that day. We are police officers, and we make mistakes. When we hear things like that we do not try to cover it up. We don't try to say it is correct. This is completely wrong."

Lafrenière had not heard the recording of the interview, but said he hopes Cavaliere will lodge a formal complaint with the police ethics commission.

The SPVM does have a sexual assault prevention unit, although not all front-line officers receive specialized training.

At Cavaliere's spa, the owners have taken steps to protect the staff by requiring photo ID for any new massage clients, she said.

Cavaliere said she hopes talking about the incident will show that more needs to be done to support victims and ensure that they feel comfortable approaching authorities.

"It's scary to think that when someone is crying for help, no one is doing anything," she said.

"They're just putting it off, saying, you know, it's part of your job. They're kind of allowing it to happen."

If you have a similar story, you can send an email to reporter Jay Turnbull.