Dozens of Montreal police and firefighters were at a homeless encampment just east of the city's downtown on Monday, trying to get the inhabitants to pack up their belongings.

Heavy police presence following fire at the site over the weekend

Dozens of Montreal police and firefighters were at a homeless encampment just east of the city's downtown on Monday, trying to get the inhabitants to pack up their belongings.

A long line of squad cars, along with officers on bicycles and horseback, arrived early in the morning to urge them, one by one, to leave the patch of green space along Notre-Dame Street.

Caroline Chèvrefils, a spokesperson for the SPVM, said the dismantling of the camp would be carried out by the fire department, which issued an eviction order after a fire broke out on Saturday near a propane tank.

Montreal Mayor Valérie Plante has said in the past that forcing people off the green space would be a last resort.

But during her Monday news briefing, she said the situation was getting out of hand as people brought in generators and other potentially dangerous equipment to keep warm and cook food. 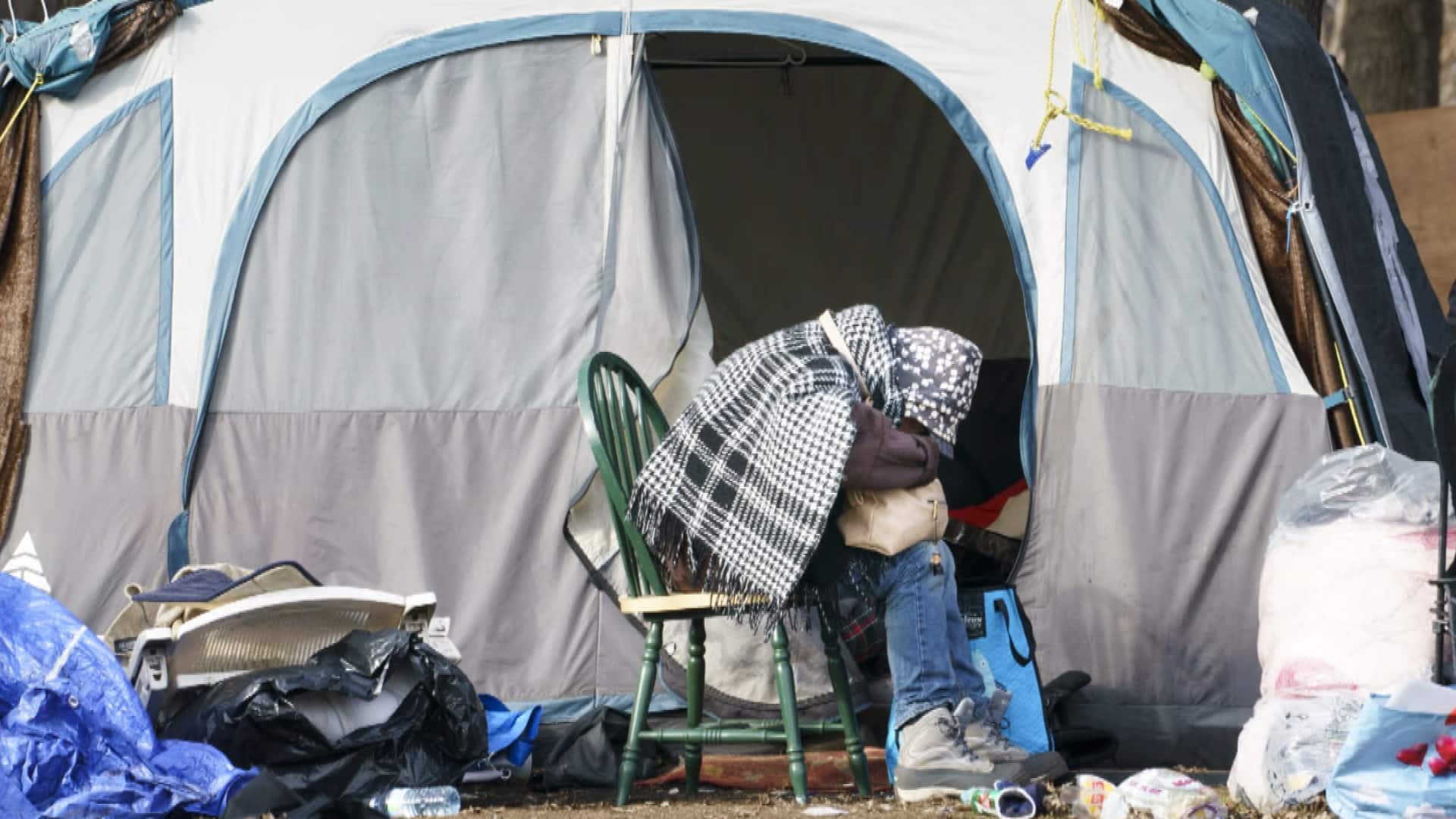 3 months ago
1:07
As dozens of police and firefighters dismantle the homeless camp next to Notre-Dame Street, community organizers say there are no clear solutions for Montreal's homeless people. 1:07

Plante said firefighters had visited the site, trying to educate people about safely using such equipment, but fires did break out, including the one on Saturday that left a portion of the camp in ruins.

That fire was centred around a propane tank, and while nobody was injured, officials say it could have been deadly.

The city isn't able to monitor the site 24-hours a day, she said, and Montreal has gone to great lengths to encourage the campers to move out voluntarily. And as many as 60 did leave, the city says.

"I think that was the right way to move forward," said Plante, but when firefighters and the provincial government decided it was time to evacuate the site for safety reasons, "we agreed with this decision."

Mercier-Hochelaga-Maisonneuve Mayor Pierre Lessard-Blais said on Daybreak that "it's not a matter of negotiation or a political debate. It's a legal issue." However, he added, there were no plans to make arrests.

Louise Desrosiers, a spokesperson for the Montreal fire department, said the eviction will be done respectfully.

"We're going to go really slowly with each tenant, each camper, one by one, and trying to do this in a calm situation with them, and respect these citizens, too," she said.

The encampment has become a glaring symbol of the economic impact of the pandemic, and advocates have been calling for more affordable housing.

Lessard-Blais said the city can only do so much and that Quebec and the federal government need to increase funding for housing.

Plante said the same on Monday, again calling on the upper levels of government to build social and affordable housing. He administration has done what it can, working tirelessly to build thousands of units with what funding it has and offering a range of services to those living on the streets, she said.

Sam Watts, the CEO of Welcome Hall Mission, which serves Montrealers in precarious situations, said the pandemic has "put a spotlight on an issue that has always been simmering beneath the surface."

The City of Montreal has doubled the number of beds available to homeless people, including a 380-bed shelter in a converted four-star hotel downtown that's now being operated by the Welcome Hall Mission.

"It's our job as a society to make sure that we provide the care to get them to where they need to be, and for them to stay there," he said.

Regardless of the city's effort to boost shelters and other services for homeless in recent months, one social housing advocacy group is voicing opposition to the eviction order.

The Front d'action populaire en réaménagement urbain (FRAPRU) says there have been camps for years in Montreal and, until the various levels of government tackle the housing crisis, the problem will not go away.

But FRAPRU spokesperson Véronique Laflamme says the Quebec government is not following through on previous electoral promises to build some 15,000 social housing units. In the past two years, she said, only 2,500 units have been built or are in the process of being built.

Back in October a new Canada-Quebec agreement was established to spend $ 3.7 billion over 10 years to improve social and affordable housing.

In a statement, the group questioned the heavy police presence and apparent use of force to remove people from the camp.

"Campers have 15 minutes, under police escort, to choose their personal effects and leave the site. This is not an acceptable dismantling," says LDL co-ordinator Marie Lacasse in the statement that accused Montreal of "failing in its commitment."

With files from Franca Mignacca and La Presse canadienne