Some people living in Quebec City's Charlesbourg neighbourhood are fed up with seeing players on their lawn at 3 a.m., making noise and hunting for the little augmented reality animals with their smartphones.

Having a Pokestop and gym near home is a dream for Pokemon Go players but a nightmare for residents of Quebec City's Charlesbourg neighbourhood.

Some residents of the Trait-Carré sector of the neighbourhood are fed up with seeing players on their lawn at 3 a.m., making noise and hunting for the little augmented reality animals with their smartphones.

Apartment building manager, Jean-Yves Parent, said that noise is only where the problem begins.

He's seen people urinate on trees and leave trash behind.

"This is a very pleasant place," Parent told CBC News. "We want it to stay nice and that's where we're having a problem." 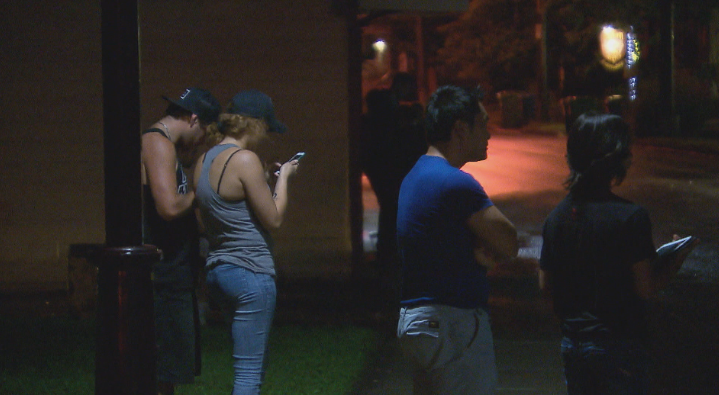 What Quebec City residents have been seeing from their homes as Pokemon Go players take over.

6 years ago
Duration 0:27
Some residents of the Trait-Carré sector of Charlesbourg are fed up with seeing players on their lawn at 3 a.m.

He said he even hired a security guard to keep watch until players go elsewhere. The guard started working the evening of July 26 and is slated to keep working on the grounds until the Pokemon trend subsides.

Sometimes hundreds of players roam the area, heads down and focused on their screens, residents say.

Resident Jacques Rochon filed a complaint with the city and requested Nintendo, the video game manufacturer, to remove the items that are attracting players to his neighbourhood.

Another resident, Suzanne Côté, said the late-night roaming makes it hard for her to sleep.

She added that there can be up to one hundred players at night trying to catch Pokemon near her home.

"Some leave, others arrive. It's very fluid," Côté said of the late night players.

She said she sees the positive aspects of the game, like bringing families together for outdoor fun.

"I like seeing parents coming with their children. And the fact that people are getting outside instead of just staying in on the internet."

Quebec City police are advising the public to make a complaint if they think things are getting out of hand.

"If there is abnormal activity, we will go and perform verifications," police spokesperson Pierre Poirier said.

With files from Quebec AM, Peter Tardiff, Radio-Canada