Pierrefonds-Roxboro residents look for answers at borough meeting after flood

Some Pierrefonds-Roxboro residents went to the borough council meeting to share their frustrations and concerns about the way the city dealt with major flooding that hit the area last May.

"We were told 'don't worry things are under control,'" says mother of 4, now living in hotel

Some Pierrefonds-Roxboro residents lined up to get into their borough council meeting Monday night to share their frustrations and concerns about the way the city dealt with major flooding that hit the area in May.

"It was a very stressful time for everybody. We were asking questions and we weren't getting any answers," said René Leblanc.

Leblanc is a resident of Des Maçons Street, in Pierrefonds. It was one of the streets worst hit by the floods that gripped the borough and many other parts of the province this spring.

Leblanc said he had only four minutes to get out of his house as water poured in through his back door.

Itsik Romano, who also lives on Des Maçons, said he watched as water took over a park next to the street three weeks before the city responded.

Mayor of Pierrefonds-Roxboro borough, Jim Beis, told Romano that the park was flooded not because of the river but because the "water table" that had been overflowing. 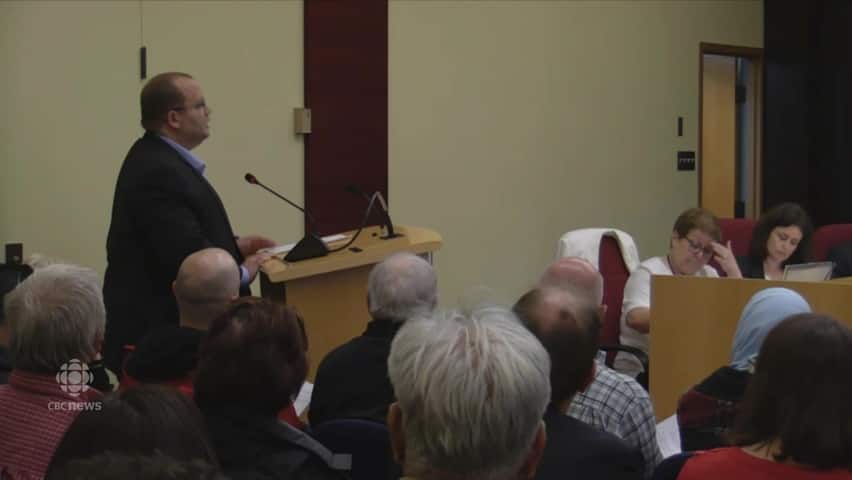 Pierrefonds resident asks what the city will do now

That's why, Beis said, the city did not consider that particular section of the borough as a priority.

"We prioritized certain sectors where we needed to intervene. Sectors in the borough that were problematic," said Beis.

Frances Maxant, who lives on Fifth Avenue North in Roxboro, said she feels her sector was ignored.

She, her husband and four children are still living in the Holiday Inn on Côte-de-Liesse Road. She says the city did not prepare them for the floodwaters.

"We were told: 'Don't worry, things are under control,'" said Maxant. She says she was told, "'Look at western Pierrefonds. There the cars are floating, there the homes are flooded, there the water has touched the homes.'"

Last month, Maxant was on a trip with one of her children, while her husband and her three other children had to leave their family home after flood waters overtook their basement.

Maxant wishes the city had built a temporary dike in the neighbourhood at the time of the flood.

Borough lends ear, but no clear answers yet

"Of the three governments we deal with Canada, provincial and municipal, the municipality is the one that is closest to the people. And we need your help," Leblanc said at the meeting.

Beis did not have answers when it came to addressing exactly how residents would be compensated. Still, he said he felt for them.

"This is a major crisis that has affected us and a hundred other communities in Quebec so definitely there is frustration," he said.

with files from Sudha Krishnan