Policymakers and residents of Montreal's Mile End are trying to figure out how to curb the high number of pedestrian accidents on Parc Avenue, after a collision Tuesday killed one woman and left another in critical condition.

Police and residents talk about safety issues on Parc Avenue

6 years ago
Duration 1:04
SPVM inspector André Durocher said pedestrians are crossing against the light while residents hope cars can slow down.

Policymakers and residents of Montreal's Mile End district are trying to figure out how to curb the high number of accidents involving pedestrians on Parc Avenue, after a collision Tuesday killed one woman and left another in critical condition.

A truck heading north on Parc collided with the two women at such high speed that witnesses say it left the vehicle badly damaged.

"I went to look at it, and it was pretty shocking to see how damaged the truck was," said Raphael Farkas, the manager of the Koodo shop near the intersection where the women were struck, at Parc Avenue and Bernard Street.

Farkas told CBC Montreal's Daybreak that he's used to rushing into the street and helping people who've been injured.

"You could count the five or six times a day that you hear tires screeching," Farkas said.

According to the transport critic for Projet Montréal, Marianne Giguère, Parc Avenue's design practically encourages motorists to drive carelessly. She thinks lanes need to be narrower, more traffic lights need to be installed, and the existing lights need to stay green longer to give pedestrians more time to cross the five-lane-wide artery. 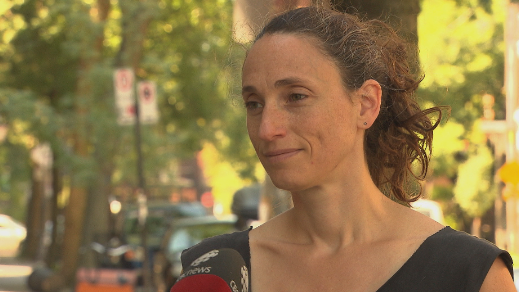 Projet Montréal's Marianne Giguère says dangerous behaviour should be expected and the city needs to put safeguards in place.

6 years ago
Duration 0:31
"We have to reduce the speed. There will always be pedestrians and cyclists doing dangerous things," Giguère said.

"When the lanes are wide, it invites the drivers to drive fast and easily forget they are crossing a dense borough with thousands of cyclists and pedestrians," Giguère said.

She said the blame doesn't lie with drivers alone, nor with pedestrians alone, since bad behaviour is universal. She does want to see the city do more to make sure accidents are less likely to be fatal.

To lower the chance of death, Giguère wants the city to:

It's "political exploitation over the accident at this intersection," Salem said.

He said the Coderre administration has done a lot to improve safety at the intersection where the two women were struck Tuesday – installing special pedestrian lights and adding green arrows to give pedestrians priority.

Police on site for 3 days

Right now, police aren't sure what triggered the accident. They say they will seek to confirm if the women were jaywalking, if the driver was driving too fast or if he drove through a red light.

André Durocher, an inspector with the SPVM's road safety division, said that several officers are stationed at the intersection, in keeping with police procedure following an accident, to educate passersby about crossing safely.

He said that despite the heavy police presence, pedestrians are still running across Parc Avenue when the light is yellow, and drivers still aren't yielding the right of way.

"There's a lot of education that needs to be done," Durocher said.

He said the top examples of dangerous behaviour are:

This is at least the second serious collision involving pedestrians at the same Parc Avenue intersection this year. A woman was seriously hurt in January.

Boisselle advises both drivers and pedestrians to exercise caution.

"Be very careful. Even if the light is green. Even if you have the right of way."

with files from CBC Montreal's Daybreak and Arian Zarrinkoub