Montreal Children's Hospital has named its atrium in honour of P.K. Subban, after the Canadiens defenceman made what the hospital described as "the biggest philanthropic commitment by a sports figure in Canadian history."

Atrium at the facility has been named after Canadiens' superstar defenceman 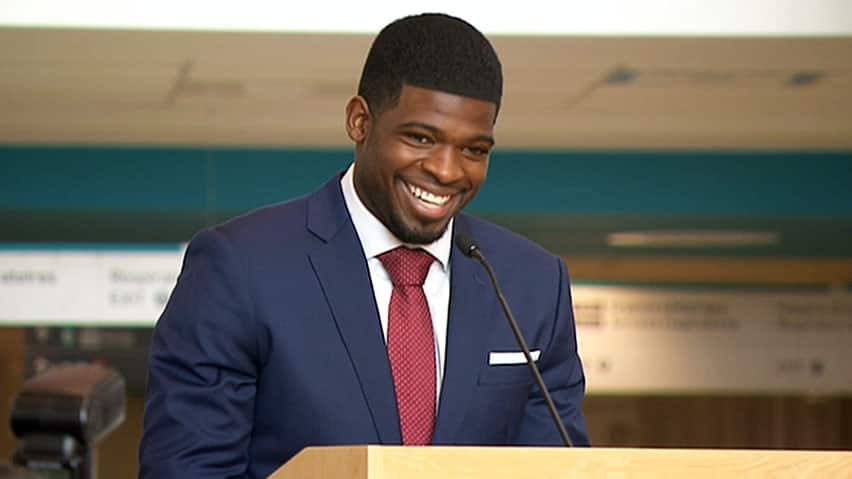 5 years ago
3:02
The Montreal Canadiens defenceman says the mega donation is "about how I live my life , what's important in life." 3:02

The Montreal Children's Hospital has received a boost from one of the city's favourite Habs.

The hospital has named its atrium in honour of P.K. Subban, after the Canadiens defenceman made what the health-care facility described as "the biggest philanthropic commitment by a sports figure in Canadian history."

"Montreal has become my second home," said Subban, who was born in Toronto. "I hope to remain here, here in Montreal, here in Quebec, for a very, very long time."

The $10 million from the hockey player's foundation, to be paid out over seven years, will be used in part for a fund called P.K.'s Helping Hands, which will help families struggling financially with a child's illness.

An official announcement was made at the hospital Wednesday, but Subban missed its start as he was stuck in traffic.

He arrived to a standing ovation and shouts of "P.K.! P.K.!" from the large crowd gathered in the atrium.

"As I was walking out of the backroom, I noticed the P.K. Subban lettering up there and I got goosebumps," Subban said pointing to his name, which now adorns a wall on the atrium.

"It's not too many times I get goosebumps in what I do playing hockey for a very long time in front a lot of people. That's probably the only time I got goosebumps in a long time."

Greg Rokos, chair of the board of directors of the Montreal Children's Hospital foundation, said the donation was like "Christmas in September."

Subban talked about a trip he took to Haiti shortly after the 2010 earthquake and how that experience shaped his perception of his path in life.

"When I came back to Canada, I made a point to myself that I wasn't going to allow my profession to dictate how I live my life," he said.

Subban has been quietly visiting children at the hospital for the past few months, Martine Alfonso, the associate executive director of the Montreal Children's Hospital said.

On hand for the announcement Wednesday morning were Subban's parents and his sisters, Élise Béliveau, the wife of late Canadiens legend Jean Béliveau, and Michel Lacroix, head announcer of the Canadiens.

"I am proud to walk in the footsteps of my idol, Jean Béliveau," Subban said.

The new Montreal Children's Hospital opened at the Glen site earlier this year.