A temporary welcome centre has been opened at the Olympic Stadium in Montreal due to a wave of asylum seekers coming from the United States to Quebec.

A temporary welcome centre has been opened at the Olympic Stadium in Montreal to house a new wave of asylum seekers coming from the United States to Quebec, many of them Haitians.

"We've never seen this before," said Francine Dupuis, who oversees PRAIDA, the provincial government organization that helps claimants in their first months.

"It's really quite a bit more intense than what we're used to."

On Wednesday, asylum seekers were taken to the Olympic Stadium by bus. Among them were children and pregnant women.

In the past, PRAIDA has worked with a Montreal YMCA to temporarily provide newcomers with housing and support, but the recent surge of Haitians crossing the border from the United States has strained PRAIDA's existing resources and forced it to open several new centres, including one at the Olympic Stadium.

We've never seen this before. It's really quite a bit more intense than what we're used to.- Francine Dupuis , PRAIDA

Between 100 and 450 cots have been set up in the Olympic Stadium. The asylum seekers will be housed in the area with concession stands just on the border of the actual arena. It's a windowless, concrete hallway. 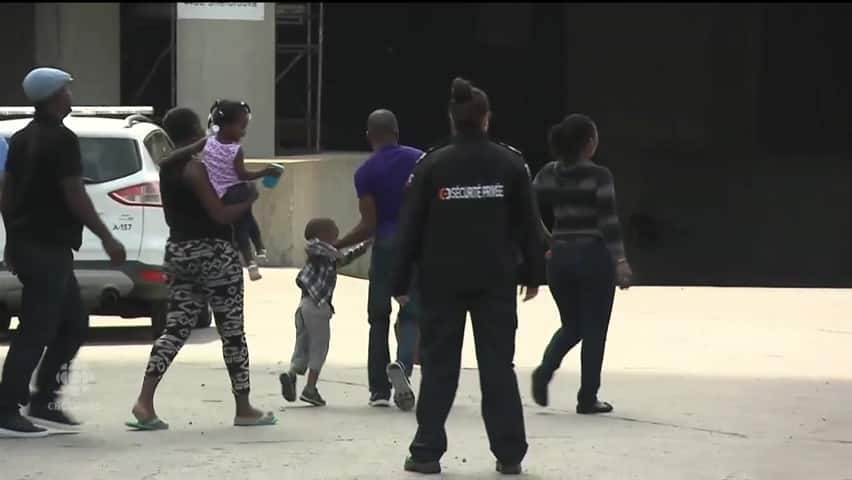 4 years ago
0:53
Watch as a group of asylum seekers are brought to Montreal's Olympic Stadium 0:53

A spokesperson for Olympic Park said the request to use the stadium came on Friday.

"We were quick to say, 'OK, how much space do we need?'" Cédric Essminimy said. "And in 24 hours, everything was set."

The Olympic Stadium is one of Montreal's most well-known landmarks. It was built in the early 1970s as a venue for the 1976 Summer Olympics. Known locally as the Big O, it was home to the Montreal Expos until the team left the city in 2004.

Dozens of other asylum seekers who crossed illegally into Quebec are still being held by the Canada Border Services Agency at the St-Bernard-de-Lacolle border crossing south of Montreal.

A number of tents and temporary shelters have been set up there to accommodate the asylum seekers.

Though official numbers have not been released by the federal government, Dupuis estimates 1,174 asylum seekers crossed into Quebec in July. In comparison, PRAIDA helped 180 people in July 2016.

Fear of deportation from U.S.

A woman interviewed Wednesday at Roxham Road, a key point of entry for asylum seekers crossing illegally into Quebec, said she left the U.S. because she was scared.

"We didn't know what was going to happen," she said.

"So we checked online and we saw that Canada was going to welcome Haitians, and that's why we come here."

One man who spoke to reporters from the Olympic Stadium identified himself as Haitian and said he arrived in Canada about a week ago.

"It feels really good to be in Canada because it's so calm," he said in French.

​PRAIDA's Dupuis said Montreal's large Haitian community is a reason why many Haitians are crossing the border into Quebec.

"Obviously, there is a stronger attraction to coming to Quebec for Haitians than in other provinces," she said.

"They have the help of their community to get settled." 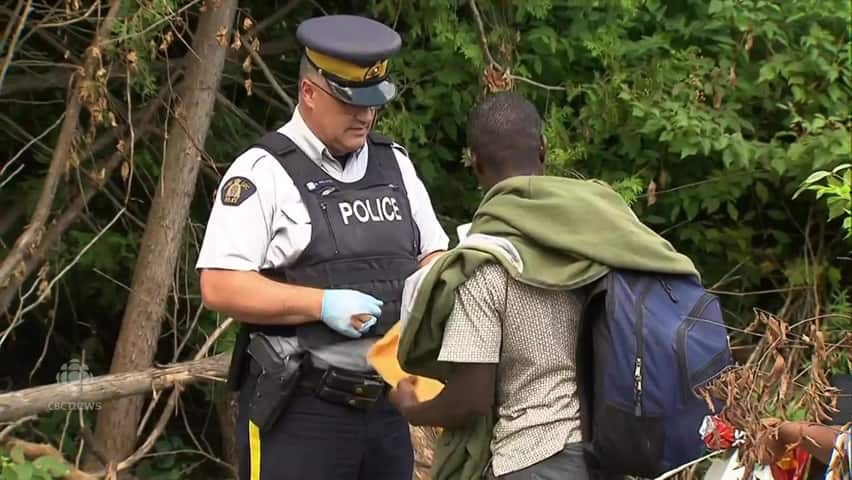 4 years ago
0:44
Record numbers of asylum seekers cross into Canada through Roxham Road 0:44

Marjorie Villefranche, director general of the Maison d'Haiti, a hub for the Haitian community in Montreal, said the group has been hearing from families living in the U.S. hoping to come to Canada.

In the last three weeks especially, a larger number of Haitians have been crossing the border asking for refugee status, she said. Villefranche said the Maison d'Haiti helps asylum seekers fill out paperwork to be able to stay in Canada.

She said word of how to cross into Canada has spread quickly on Haitian social networks, encouraging more people to come to Quebec.

However, it's unclear if they'll be able to stay. Asylum seekers originally from Haiti who have crossed the Canada-U.S. border could be deported back to Haiti if their application is refused, because Canadian authorities deem Haiti as a sufficiently safe country.

"You can count on our full co-operation," he wrote.

She said the influx is not unprecedented and Quebec is working "hand in glove" with the federal government to process the asylum seekers in a timely manner.

"We can handle it. There is not one ministry that is concerned about that — the federal government is not concerned about it. We have seen volumes like this in the past," she said.

The asylum seekers are usually housed for a couple of weeks, Dupuis said. PRAIDA also uses the centres to help them get their paperwork in order and find permanent housing.

Dupuis said the organization is in daily contact with the provincial government and is working to deal with demand as it comes, but they cannot predict whether the number of asylum seekers will stabilize, increase or diminish.

In first six months of 2017, there have been 4,345 illegal border crossings by asylum seekers in Canada. Border crossings into Quebec represent the vast majority — 3,350 of the 4,345.

Under Canada's Safe Third Country Agreement with the United States, most asylum claims made at official land border crossings with the U.S. are denied on the spot.

The agreement deems both Canada and the U.S. safe for asylum seekers and requires them to make a refugee claim in the first country they arrive in.

However, by entering Canada illegally and claiming refugee status, asylum seekers are generally allowed to stay while their refugee applications are processed.

With files from Radio-Canada, Peter Zimonjic and Ryan Hicks