Dr. Nadia Chaudhri has died, according to a close friend and colleague. From her palliative care bed, the Concordia neuroscientist shared pockets of joy and wisdom that resonated around the world, and raised funds for future scientists.

Nadia Chaudhri, a Montreal neuroscientist who gathered a worldwide following while sharing her journey in palliative care with ovarian cancer, has died. She was 43.

Chaudhri was renowned for creating scholarships for underrepresented young scientists and raising awareness about ovarian cancer amid her terminal diagnosis.

The original story on Chaudhri appears below:

There is a picture pinned at the top of Nadia Chaudhri's Twitter page of the neuroscientist's young son eating a mango in July 2019. The sun shines above his baseball cap and sends flares across his face, giving the photo a glittery sense of wonder.

The boy's small hands cupping the mango convey joy in its purest form.

Chaudhri's Twitter presence is full of these moments: a trash can she and her family painted over with all sorts of colours; close-ups of flowers or picking mushrooms; eating gelato with the grandparents on a warm summer evening.

She also shares reminders of her painful reality. The view from her room in the McGill University Health Centre's palliative care ward. A watercolour painting of her Sun (her son) and her Moon (her husband) planting her ashes at the base of a serviceberry tree.

"I drew this to help my Sun visualize my wishes," she wrote. "I hope it will help."

In June 2020, at 43, Chaudhri, a Montreal neuroscience professor, was diagnosed with metastatic ovarian cancer. That fall, she went through chemotherapy but was told the following spring the cancer would be terminal.

In the course of launching two fundraisers for underrepresented science students and sharing intimate parts of the realities of living with a terminal diagnosis at such a burgeoning time in her life, Chaudhri has gained a following of more than 90,000 around the world who've been moved by her story.

My parent's house in Karachi was surrounded by mango trees and as a child I would sit in the branches and devour sun-ripened mangoes. So this photo of my little one warms my heart. <a href="https://t.co/Czdr6oXzd1">pic.twitter.com/Czdr6oXzd1</a>

While she was in the hospital, Chaudhri drafted a GoFundMe pitch to help fund travel for young scientists — particularly those who are marginalized or underrepresented in the field — to be able to attend the Research Society on Alcoholism's annual conference. On the first day, she raised $50,000 US. The campaign has since generated more than $212,000 US.

"I was thinking a lot about my future," Chaudhri told CBC in April, shortly after creating the fund. "I realized I'd have to shut down my lab. And I realized the thing I would really miss is my ability to advocate for and promote young scholars in my field."

Soon after Chaudhri's GoFundMe launched, Concordia University — where Chaudhri has taught since 2010 and where she had her research laboratory on the Loyola Campus — also set up a fundraiser in her honour.

The Nadia Chaudhri Wingspan Award will become an annual scholarship to support neuroscientists from underrepresented backgrounds, including students who may face barriers related to systemic issues like racism, sexism or geographic origin.

Her colleagues thought it would take six years to raise the $150,000 necessary to be able to give one graduate student a $5,000 scholarship every year, said Kristen Dunfield, an associate professor of psychology at Concordia.

The university is trying to decide whether to increase the scholarship or hand out several per year.

In September, Concordia promoted Chaudhri to the rank of full professor. 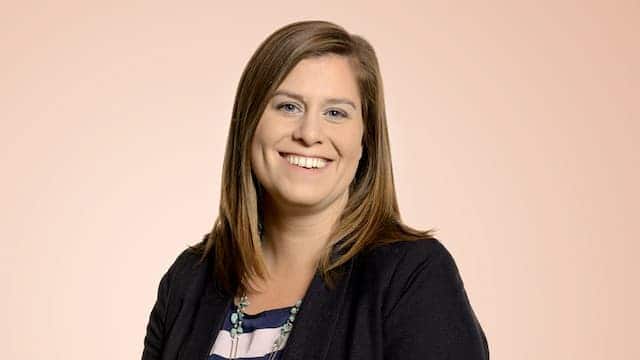 All in a Weekend16:40Montreal professor with terminal cancer raises more than $100K for young scientists

"For someone to look at an unimaginable challenge and work through it with such grace and conscientiousness. I mean, she's just thinking of other people, right?" said Milan Valyear, who was the first person to graduate with a PhD from Chaudhri's lab.

"She's launched not one, but two wildly successful funding campaigns that are not going to just exist briefly, but exist as endowments in perpetuity," he said.

"This is just another example of her being fearless, courageous and impressive."

Valyear reached out to Chaudhri after he landed on her studies and became fascinated with her findings.

One of them is a highly cited experiment examining the way nicotine can make stimuli in the environment more appealing. In it, Chaudhri had figured out how to make lab animals want to consume nicotine, a necessary step to studying its pull on people, but a tough feat.

Valyear had shared with her his anxieties about the dismal job prospects for young academics and recalls her telling him, "If you really want to accomplish something, I think you just need to have blind faith in yourself and pursue it."

Sarah Benkirane was a student of Chaudhri's during her undergraduate degree and remembers how important having her as a teacher was in encouraging her to pursue graduate studies.

"Seeing her be a first generation [university student], racialized person meant so much to me," said Benkirane, who is now pursuing a post-graduate degree in social psychology.

"It was easy for me to think, 'Well, I'm never going to go into academia. I don't see people who look like me,'" she said.

"Even more than the money, the symbolism that comes with having a place specifically for BIPOC students and racialized students within the university and within the sciences, it's so important."

Chaudhri was the one to hand Benkirane her undergraduate diploma when she graduated.

Chaudhri was born and raised in Karachi, Pakistan, and left at 17 to pursue a liberal arts degree at Franklin & Marshall College in Pennsylvania, she recounts on her GoFundMe page. It's where she says she became interested in the brain, but scholarships for non-U.S. citizens were hard to come by.

She believes a reference letter that was "thick as a book" from one of her professors there helped land her one of the most competitive grants in the United States.

"The support I got from various people who gave me a leg up, who took the time, who invested in my career, that is the seed for what I want to try to pay back in my own life," Chaudhri said during her April interview with CBC's All In A Weekend. She declined an interview for this story, saying she wanted to spend the rest of her time with close friends and family.

Until earlier this week when Chaudhri said walking was too difficult, she was posting videos of herself walking the hallway in palliative care once a day for 11 days. She called it her "Shuffle," a reference to Concordia's fundraising tradition of walking between its two campuses. Every time, she would include a link to donate to the Wingspan Award.

In each video, Chaudhri wore something different and colourful, and fun: cat ears, a witch hat, a bright yellow t-shirt with a cartoonish bow tie, a Pakistani dupatta. In one, she wears a straw hat and her son bounces at her side.

Kurt Fraser, a neuroscience postdoctoral fellow at the University of California, Berkeley, met Chaudhri at the Research Society on Alcoholism's annual meeting and says Chaudhri's shuffle videos reminded him of the fashionable dresses she would wear to the conference.

"She just loves sharing her soul with everyone. And I think that's one way that she likes to express it," Fraser said.

"She encompasses a lot of aspects of what I think most of us want to be like. She has all these amazing interests and skills outside of being a good scientist."

Dunfield, the associate psychology professor, says Chaudhri has made her appreciate being an instructor more.

"What Nadia has done is found these little pockets of joy," she said.

While Chaudhri's Twitter presence has inspired people around the world, it's also allowed some of the people around her to see other sides of her.

"In some ways, I know her more now," said Rueben Gonzales, a University of Texas professor who was working on a research project with Chaudhri.

"It's a blessing to know her that deeply … but I'd rather have her! It's hard. I'm just thrilled she's done this. Her legacy is incredible."

Valyear, who is now a postdoctoral researcher at McGill, says pieces of wisdom Chaudhri has shared over the years continue to resonate.

Recently, he had been delivering Chaudhri different foods she craved — burrata, hot cross buns. One time, they sat chatting in her backyard and he reminded her of her advice to have blind faith years before.

"And she said that blind faith in yourself now has to change into trust in yourself," Valyear said.

"Whether I have to make very important meaningful decisions or very trivial or technical decisions, I hear her voice like an echo, you know?"

Nadia Chaudhri may be dying, but part of her legacy will be to have shown us another way to live.

With files from Ainslie MacLellan and Sudha Krishnan