Let's take a closer look at the three issues that sometimes get lumped together under the heading of a "Netflix tax."

In the last federal election campaign, the Conservatives released an ad featuring their leader, Stephen Harper, admitting that Breaking Bad was among his favourite TV shows.

But it's what he said next that actually had a more profound impact on the viewing habits of the Canadian public.

Harper promised he would never, ever tax Netflix. His main rivals quickly made the same promise.

In this election campaign, the parties have again come to hold remarkably similar positions on whether to tax Netflix and other web giants — only now, everyone embraces the idea.

The Liberals, the NDP and the Greens have nearly identical proposals in their platforms to tax multinational corporations that conduct their business online.

This dramatic change of heart might be attributed in part to the public's reaction when the Liberal government kept its promise to not impose a Netflix tax.

Netflix agreed in 2017 to spend $500 million on Canadian productions over five years, including $25 million on French-language content. Ottawa opted not to force the company to remit sales tax on its Canadian subscribers.

The 2017 deal was deeply unpopular in Quebec. Many felt the feds gave in too easily to an American corporation without doing more to support the local film and television industry.

But around the world, national governments are also facing mounting public pressure to tax web giants.

This global backlash, say tax experts, is pushing countries like Canada to revisit tax rules that were drafted long before prime ministers could binge-watch shows on the internet.

A sales tax on Netflix

There are roughly three distinct policy ideas that come up when the political conversation turns to a "Netflix tax."

Let's begin with the least controversial: forcing streaming sites like Netflix and Spotify to collect and remit federal sales tax, an idea backed by the Liberals, the NDP, the Greens and the Bloc.

Two provinces — Saskatchewan and Quebec — already require foreign web companies to do this with their provincial sales tax. It's been a smashing success, revenue-wise, in Quebec.

The provincial government had expected to raise $28 million this year from the new tax. As of August 31, it had already raised $38 million.

"This part of the proposals is straightforward and fairly unsurprising at this stage. Many countries are exploring the prospect of digital sales taxes," said Michael Geist, who holds a Canada Research Chair in internet and e-commerce law at the University of Ottawa.

The challenge, he said, will be ensuring international companies comply with the rules. That could entail additional costs for the government which might outweigh the financial benefits of applying the tax in the first place.

In Quebec, digital companies have been willing to play along, signing up voluntarily to charge and remit sales tax.

After all, it's consumers who are paying the tax, not the companies themselves.

More controversial is the proposal to impose an income tax on web giants like Google, Amazon, Facebook and Apple.

The idea is backed by every party. The Liberals, the Conservatives and the Bloc have even suggested a specific rate: three per cent of all revenues generated in Canada. 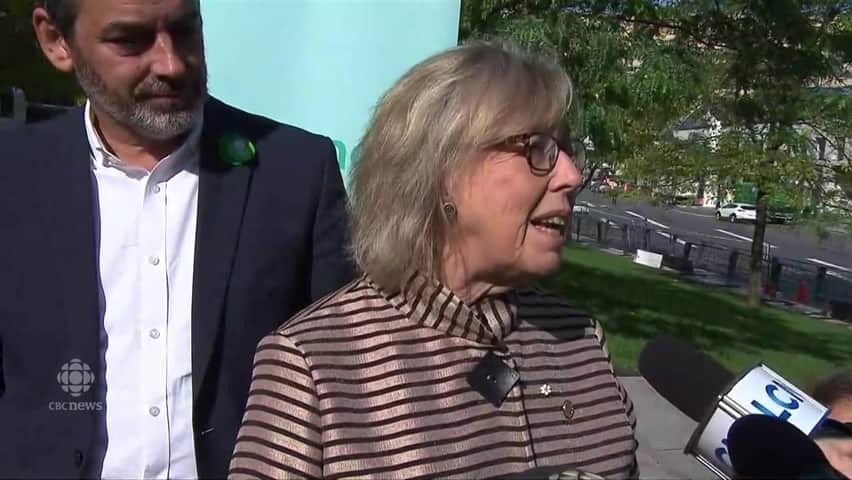 'Need to ensure that our culture survives,' May says

1 year ago
0:24
While campaigning in Montreal Wednesday, Green Party Leader Elizabeth May says if elected, she promises to tax major tech giants that she sees as a threat to Canadian culture, such as Netflix and Facebook. 0:24

Slapping an income tax on web giants was thought to be impossible just a few years ago, said Brigitte Alepin, a tax expert who advised the Quebec government as it drafted its Netflix tax.

The problem was double taxation. The corporations are headquartered in the United States and already pay corporate tax on their revenues there.

Many feared that if countries went ahead and imposed their own income taxes without consulting each other, they would simply end up creating tax havens elsewhere.

There was also the very real possibility that the United States, angry at other countries eating into its tax revenues, would retaliate with tariffs.

But earlier this year, France went ahead with a three per cent tax on income international companies earn from providing digital services in the country.

The absence of retaliation from the U.S. suggests a similar move could be feasible for Canada.

But Alepin suggested that, before moving forward, the next government should discuss the issue with American trade officials.

"We have to be very careful with this approach. We have to be careful not to vex our neighbour to the south," she said.

Alepin also said a three per cent tax should be seen as a short-term measure to address gaps in a tax system that wasn't designed with internet commerce in mind.

An international effort — headed by the OECD — is underway to harmonize the taxing of web giants. Canada should follow those rules when they're ready, Alepin said.

What to do about Cancon

The third and most controversial issue related to a "Netflix tax" is what to do about Canadian content.

Unions representing film and television workers have been lobbying federal parties since the summer to commit to forcing services like Netflix and Amazon Prime to contribute to the Canadian Media Fund, which invests in local programming.

In Quebec, where a vibrant entertainment industry is considered vital to protecting the French language, there is still lingering anger over the Netflix deal.

The parties have been less specific about how they'd respond to these demands.

When Liberal MP Pablo Rodriguez released his party's cultural policies last month, he said "we'll ensure that digital platforms play by the same rules and contribute Canadian content." He offered few details about what that meant.

The NDP platform makes the same commitment to making sure digital companies "play by the same rules as Canadian broadcasters." The Greens are more explicit, saying Cancon rules will apply to Netflix.

But despite the anxieties within the culture industry about the Netflix deal, Geist said there are indications the Liberal approach has been successful.

"The reality is the company has spent more than $500 million on production in Canada just in the last two years alone. And they're doing that without the need for regulation," he said.

Geist added that advocating for a level playing field could be a double-edged sword for Canadian content producers.

While domestic cable and satellite providers, along with Canadian broadcasters, do have to help finance local productions, they enjoy other benefits that foreign streaming services do not.

According to Geist, these include simultaneous substitution, must-carry requirements and copyright exceptions.

"If the [next] government does argue that what we need is a level playing field, then perhaps it also ought to recognize there are a whole range of advantages that the existing incumbents have."