The National Energy Board hearings in Montreal for the proposed Energy East pipeline were cancelled after protesters stormed into the room on Monday, marking a difficult start to a process already subject to intense criticism in Quebec. 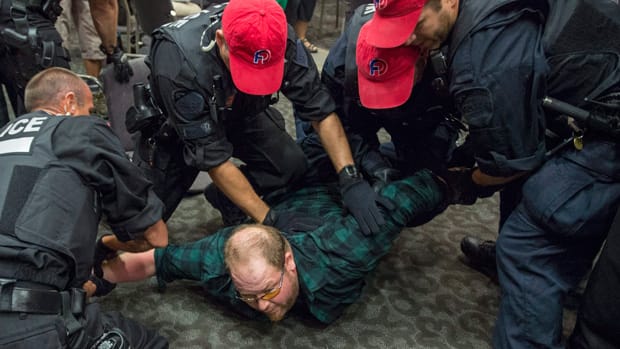 5 years ago
0:35
NEB's Energy East hearings in Montreal stormed by protesters and security tackles the most difficult one first 0:35

The National Energy Board hearings in Montreal on the proposed Energy East pipeline were cancelled on Monday after protesters stormed into the room, marking a difficult start to a process already subject to intense criticism in Quebec.

The second day of hearings, scheduled for Tuesday, has been postponed, but no new date was given.

"This decision was made in light of a violent disruption in the hearing room this morning which threatened the security of everyone involved in the panel session," the NEB said in a statement.

The NEB said it will provide more details tomorrow.

The ruckus began before Montreal Mayor Denis Coderre addressed the proceedings as the scheduled first speaker.

In the downtown conference room where the hearings were set to take place, one protester ran to the table where the commissioners were seated and almost knocked it over. Others held up a banner at the front of the room.

Police entered soon after to remove the protesters.

Coderre cancelled his appearance, calling the event a "circus." The Montreal mayor has been an outspoken critic of the proposed $15.7-billion pipeline.

News of the cancellation reverberated across the country, with federal Minister of Natural Resources Jim Carr telling an Edmonton business crowd he's concerned protesters were able to shut down today's hearing.

"Not everyone's going to agree. But everyone should have a right to express themselves, and that's a fundamental Canadian value," he said.

One of the men was detained and the other two people were released on a promise to appear in court at a later date.

Outside, amid a heavy police presence, about 200 people gathered outside the Centre Mont-Royal, where the hearings were scheduled, with many expressing support for the project and others opposing it.

A large contingent of Canadian Piping Trades Union Local 144 members showed up in support of the project, and chanted, "we want to work."

But it was countered by a chorus of "we want to drink water," by protesters concerned about the project's potential impact on the environment.

"Leave the resources in the ground," said Emily Drysdale, a Montreal resident who was holding up a pipeline that said "no pipeline."

"It's the big multinational companies that are making money on the oil."

Coderre was to appear at the hearings on behalf of the Montreal Metropolitan Community, just days after he called for their suspension after learning that NEB commissioners met with former Quebec premier Jean Charest while he was working for TransCanada.

The NEB apologized, saying it wasn't aware that Charest was working with the company at the time.

'This is not a time to take chances': Coderre

"It's a matter of having answers," Coderre said, referring to both the Charest affair and the Radio-Canada investigation.

"This is not a time to take chances. There's too many problems."

Three First Nations chiefs, among others, were also scheduled to speak at Monday's hearing.

They held a news conference instead.

"We all have one common thread — and that's safeguarding our environment for future generations," said Grand Chief of Kanesatake Serge Simon.

He's concerned the pipeline would pass through the Ottawa River close to the Mohawk community. 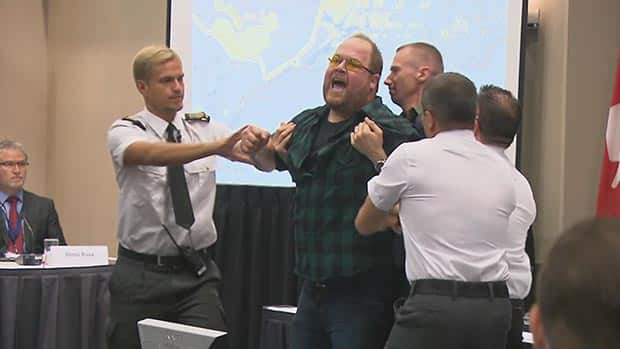 5 years ago
1:10
A group of protesters enter the room where Energy East pipeline hearings were taking place in Montreal 1:10

The NEB is scheduled to hear from an array of speakers, in support of and opposed to the pipeline, as part of its process to decide whether to approve TransCanada's bid to build the 4,500-kilometre pipeline that would transport crude oil from Alberta to Eastern Canada.

The hearings are also scheduled for several other cities, including Quebec City, before concluding in Kingston, Ont., in December.

The board must submit its report by March 2018 after which the federal cabinet will have the final say on the project.

With files from Jonathan Montpetit and The Canadian Press