Fatima Ahmad, a Montreal woman who wears a niqab, says she has no problem with showing her face for identification purposes but doesn't like another requirement under the law: removing her veil while in class.

The McGill University student says that in the last seven days, she's gotten "dirty looks" and was even yelled at while walking down the street, "It's not Halloween."

After Bill 62, which bans face-coverings while people are receiving a public service, was adopted last Wednesday, Ahmad stopped taking public transit and instead has been getting a lift from her father.

"Even if public workers are not enforcing it, I feel like the citizens are taking actions in their own hands and I feel like someone's going to come and rip my niqab off or…I don't know what's going to happen. I fear for my life," said the 21-year-old. 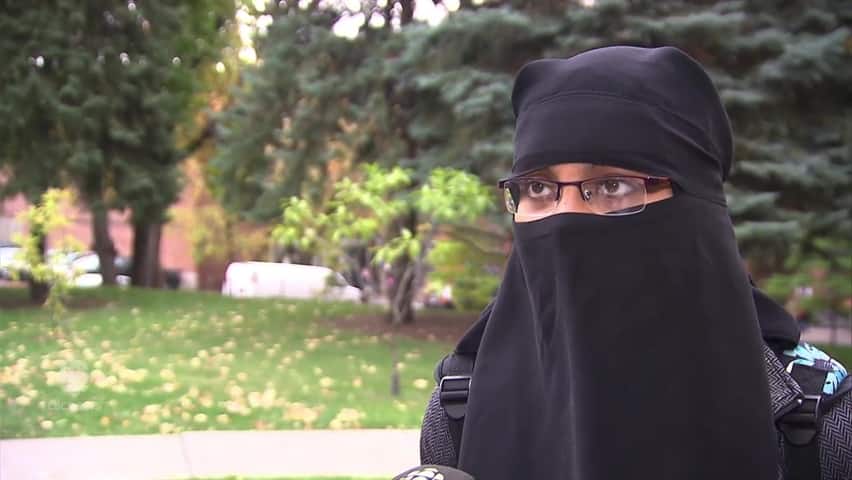 Bill 62 makes 'life so much harder' for Fatima Ahmad

Ahmad said she has no problem with showing her face for identification purposes, but she doesn't like another requirement under the law: removing her veil while in class.

According to the province's directives, students must have their faces uncovered in class to "facilitate learning." This applies to all levels of publicly funded education, including universities and colleges.

"I have been studying at McGill for two years. There is no need, except when I do my exams, [which is] fine, to tell me what to wear [or] what not wear in university," said Ahmad, who is studying education.

"Everything is so confusing and I think it's useless to make a law. …It's a problem that didn't exist that they're creating."

Ahmad, who was born in Canada, told CBC News that she began wearing the niqab last year. It's one of the ways in which she shows her "devotion towards God," she said.

It was a decision her father questioned but supported, because being Canadian means having the right to choose.

As soon as the bill passed, she was crying.- Fazle Elahi Ashek  Ahmad , father of Fatima Ahmad

"This is her country and she chose to put the niqab. I advised her that it is not obligatory but she chose to wear the niqab for her strong conviction," said her father, Fazle Elahi Ashek Ahmad.

"As soon as the bill passed, she was crying.…As a parent, I feel very vulnerable," he said, adding that he feels the new law gives people a licence to harass his daughter and other Muslim women.

"With this law, they are more vulnerable to any verbal abuse and any physical abuse. This law gives them a boost to [attack.]"

Ahmad said she still hasn't decided when she'll take public transit again, but she wants to send the message to Quebecers that her face-covering is not a threat.

"It's just my conviction and I am just practicing my rights as a Canadian. I am not trying to impose anything on anybody."

An 'obligation to accommodate,' McGill says

McGill University principal Suzanne Fortier released a statement Tuesday saying that "inclusion is a fundamental value of the McGill community," and that nothing will change as a result of Bill 62.

"Based on the information we currently have, Bill 62 will not affect our existing policies and practices. All members of the community — faculty, staff and students — should continue to carry out their functions and activities in the same manner as they did before the new law," the statement said.

When pressed for clarification — the Justice Ministry's most recent news release indicates clearly that all students attending public education institutions must have their faces uncovered in class — a McGill spokesperson said only the following: "​McGill University has the obligation to accommodate religious differences, and it will continue to do so.​"​