About half of the streets in the city of Montreal have been relieved of the 53 centimetres of snow that clogged arteries and plagued on-street parking since last weekend's storm. 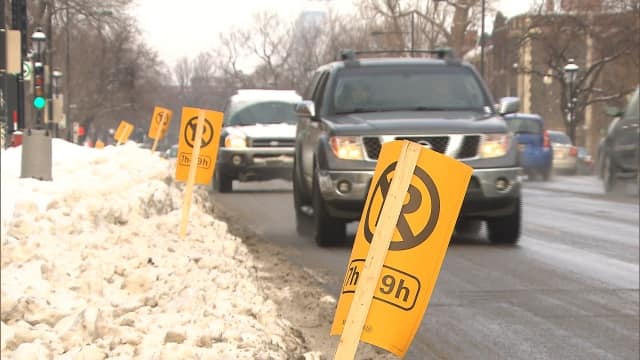 About half of the streets in the city of Montreal have been relieved of the 53 centimetres of snow that clogged arteries and plagued on-street parking since last weekend's storm.

The city held a news conference to update the progress of the snow-clearing operation this morning and vowed to have all of the snow removed from roads by New Year's Eve.

Each car that has to be towed out of the path of snow clearing crews adds another 10 minutes to the job. The city has towed 3,500 cars in the last four days.

The city is also asking residents not to put garbage out on snow banks, but place them on the cleared side of the street if possible.

Hydro still out for thousands

Five days after the storm, more than 1,900 Hydro-Québec customers are still without power.

The great majority of those customers still in the dark are in the Eastern Townships.

On Friday the Red Cross still had two emergency centres providing warmth and shelter – one in Cookshire and one in Sherbrooke.

Marie-Élaine Deveault, spokeswoman for Hydro-Québec, said 800 employees are working around the clock making repairs to the network. She said most customers should have their service restored by this evening.

Across eastern Canada, tens of thousands remain without power.

In Toronto, where more than 300,000 customers were in the dark at the height of the outage, about 32,400 are still waiting for their service to be restored.

Another twelve thousand are without power elsewhere in southern Ontario.

Police officers have been going door-to-door in apartment buildings to ensure residents are okay.

In Montreal, light snow is expected to continue throughout the day, though it isn't expected to affect the clean-up operation because of minimal accumulation.

The temperature is also expected to rise up to a forecasted a high of 1C Saturday.