This handy guide introduces you to exploring the city from an Indigenous perspective.

Exploring the city from an Indigenous perspective

Montreal Together is a collaboration between the Department of Journalism at Concordia University and CBC Montreal. This story is the work of a team of student journalists.

Speaking at Montreal City Hall last year, Mayor Denis Coderre said he wanted "Montreal to be the city of reconciliation."

But what does that mean?

For many Indigenous people, spaces are inextricably linked to their world view. One way, therefore, to foster reconciliation is by rediscovering some of the Indigenous aspects of the cityscape.

Here are five Montreal spaces seen from an Indigenous perspective.

Mohawk, or Kanien'kehà:ka, elders say the St. Lawrence River was a territorial border for the Haudenosaunee, the people of the Iroquois Confederacy whose lands extended all the way to the Mohawk River in New York and to Lake Ontario near Niagara.

When Eric Kanatakeniate McComber was a boy growing up in Kahnawake, his father taught him how to live off the river. His father had learnt these skills from his father before him. And so on, for generations.

McComber, now 61, has passed those lessons on to his five sons, teaching them how to sustain themselves and their families by harvesting sturgeon, yellow perch and ducks from the St. Lawrence, depending on the time of year.

"People are so detached from the river now, they only notice it when they go over the bridge or to go to the movies," said McComber, keeping a close eye on his sons as they butchered caribou.

"We were people of the river here, before the seaway was made 60 years ago. People used to live and fish off that river."

The federal  government now invests close to $15 million per year cleaning up the St. Lawrence River. Since 1988, Canada has invested $357 million in projects aiming to conserve and enhance the St. Lawrence

On the top floor, most weekdays, Sidric Vincent can be found making baloney sandwiches that will be distributed to homeless people by the centre's street patrol, Ka'wáhse.

In the Mohawk language, the name means "Where are you going?" 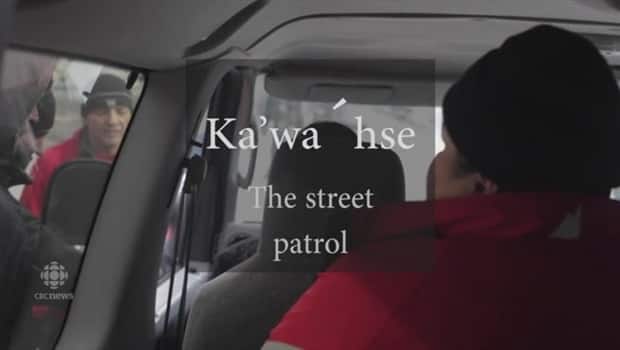 In order to reach out to Montreal's Indigenous homeless people, the Native Friendship Centre not only deploys its street patrol but also offers paralegal services and a day centre, where coffee, soup, bannock and a safe space are available.

It is one of two Friendship Centres in Montreal and among 119 across the country.

"It's a culturally pertinent place in the city where positive aspects of Indigenous heritage are given just as much space as the negative ones."

Tucked into the heart of the Botanical Gardens, there is an unassuming canopy of old-growth trees where hints of Quebec's Indigenous traditions are hidden.

Opened in 2001, the First Nations Garden is an outdoor museum chronicling Indigenous culture and plant use.

"The garden is a precious tool for reconciliation because its very mission is to acknowledge and promote knowledge of First Nations, Métis and Inuit people," said Sylvie Paré, who is the First Nations Garden's cultural agent.

"We've been working towards reconciliation for 16 years."

The garden is also home to a sweat lodge run by Sedalia Fazio, who leads traditional ceremonies for community members.

This year, the garden will be the site of a pipe ceremony to commemorate the Great Peace of Montreal of 1701, when 1,300 representatives of 30 First Nations gathered in Montreal to sign a peace treaty with New France.

Organized by KinaWaa, a group that promotes Indigenous culture, the event will feature elders, dignitaries and representatives from several cultural communities in Montreal.

"The goal of [the Great Peace] was to negotiate peace for years and generations to come," said Paré. "And we continue for the future. Reconciliation is an ongoing work."

The Roundhouse is not your typical café. The services it offers are as important to its clients as the coffee it serves.

Brainchild of L'Itinéraire, a magazine produced by homeless people in Montreal, the Roundhouse Café is located in Cabot Square, near Atwater Metro.

The café first opened its doors in 2015 with support from the YMCA and NETWORK, a community organization dedicated to helping Indigenous Montrealers.

The café's mission is closely tied to its location: helping homeless people who congregate in the area. Its most popular draw is a pay-it-forward program, said manager Al Harrington.

This allows clients to buy an extra drink or snack that someone else can enjoy later.

"We have a lot of First Nations and Inuit that occupy the area," Harrington said.

"I think [the program] builds really good strength for our people, for the people who are in need, too. They haven't been forgotten."

It is not only physical spaces that require re-Indigenization, but virtual ones as well.

When the internet was still an emerging technology, Kahnawake-born artist Skawennati saw the potential the new medium held for asserting Indigenous identities.

"When it came to the still camera and the moving camera, non-Native people had access to these tools, and they used them to take pictures of us, but in the end they ended up telling their version of who we were," Skawennati said.

"We felt that if we could get in at the very beginning, we could help shape the look and feel, and we could tell our own stories about ourselves."

So along with Jason Lewis, she created AbTeC in 2005, housed in Concordia's EV building. It is a network of academics and artists who share the goal of ensuring an Indigenous presence in cyberspace.

They carry out a wide range of activities. Last summer, for instance, they held a series of workshops with Indigenous youth on the northwest coast of Canada. Skawennati helped them create machinimas, or real-time computer graphics engines, for the online game Second Life.

This summer they're heading to Hawaii, where they have been invited by Kamehameha Schools to teach Native Hawaiian youth how to make a video game.

"Our main objective is to identify and implement methods by which Aboriginal people can use new media technologies to complement our cultures," reads AbTeC's mission statement.

Montreal Together is a collaboration between the Department of Journalism at Concordia University and CBC Montreal.

Working in small teams, they spent the winter semester developing their stories in text, audio, video, photography, infographics and maps.