Montreal tenants scammed out of up to $950 each

At least seven people have come forward alleging they were scammed out of up to $950 each after they tried to rent an apartment in St-Henri.

Woman posed as landlord and showed her apartment, then took rent money and disappeared 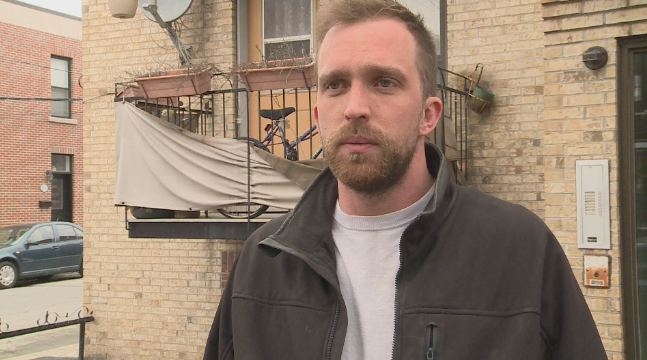 Numerous renters scammed by a tenant who posed as the landlord, took their rent money and disappeared.

5 years ago
1:08
Numerous renters scammed by a tenant who posed as the landlord, took their rent money and disappeared. 1:08

At least seven people have come forward alleging they were scammed out of up to $950 each after they tried to rent an apartment in St-Henri.

They all visited the same apartment at 185 Bourget St. and upon signing a lease, paid the first month's rent.

When they returned to the apartment to collect the keys, the duo who tricked them was gone.

The scam involved one woman posing as the owner of the building over email and then acting as the tenant of the apartment when a potential renter visited.

If the potential renter was interested in signing a lease, then a second woman would appear, posing as the landlord's wife.

She would explain that the landlord was not available but she would provide the lease for them to sign in exchange for the rent money in advance.

One victim, David Burt, told CBC News that he doesn't have much hope the two women orchestrating the scam will be brought to justice. He said the police and Régie du logement already have a file on the main suspect.

"I was told that if she were caught she would probably just get a slap on the wrist," Burt told CBC.

Landlord doubtful this scam can be stopped

The actual landlord, Mervyn Hernandez, said the tenants in question had not paid any rent to him in the three months they lived in the building. He regrets what happens but doesn't know how this kind of scam can be prevented.

"In all the years I've been doing this no one has ever asked me to prove I'm a landlord," Hernandez said.

How to avoid being scammed

Police say they are investigating. Commander Michel Leduc of the SPVM fraud division said suspicious activity surrounding renting an apartment should be reported to police right away.

"This kind of scam happens in January up until June when people are looking for an apartment. We already have a couple of files open this year," Cmdr. Leduc said.

He added that this scam is unique because people were able to visit the apartment. Usually everything in this kind of fraud is carried out online.

A Régie du logement spokesperson, Denis Miron, said that it is important to pay attention to the first section of any lease where the potential tenant can verify the full identity of the landlord.

The RCMP fraud unit has this advice:

With files from Shaun Malley and Lauren McCallum