Dancing through adversity for the Super Méga Continental

This is the third of Anna Asimakopulos's chronicles of the path to opening night on Friday, Sept. 15. She will be sharing her story and those of fellow dancers. The performances of Super Méga Continental will be Sept. 15, 16, and 17 at Place des Festivals.

This is the third of Anna Asimakopulos's chronicles of the path to opening night on Friday, Sept. 15. She will be sharing her story and those of fellow dancers.

The performances of Super Méga Continental will be Sept. 15, 16, and 17 at Place des Festivals.

The move goes like this: a full turn on one foot in one direction, and then a quick turn in the other, followed by a side right-foot kick with our arms thrown up in the air. Every time I do it, I keel over. What should be fluid and dynamic looks more like a sad wobble.

Sadly, that's far from the only moment I lose my balance during rehearsals for the Super Méga Continental, the big free outdoor dance show taking place Sept. 15, 16, and 17 at Place des Festivals.

I suffer from vertigo. Two years ago, labyrinthitis (an infection of the inner ear) robbed me of my balance, leaving me with damaged vestibular and auditory nerves.

I had to relearn how to stand, how to walk, how to turn my head and walk at the same time. And though I am infinitely better, I still can't balance the way I once did.

When Sylvain Émard called for 375 amateur dancers to perform in his show, I knew I wanted to do it. Whether or not I could handle a 30-minute choreography with a mix of contemporary dance and line dancing was another matter.

I went ahead anyway. 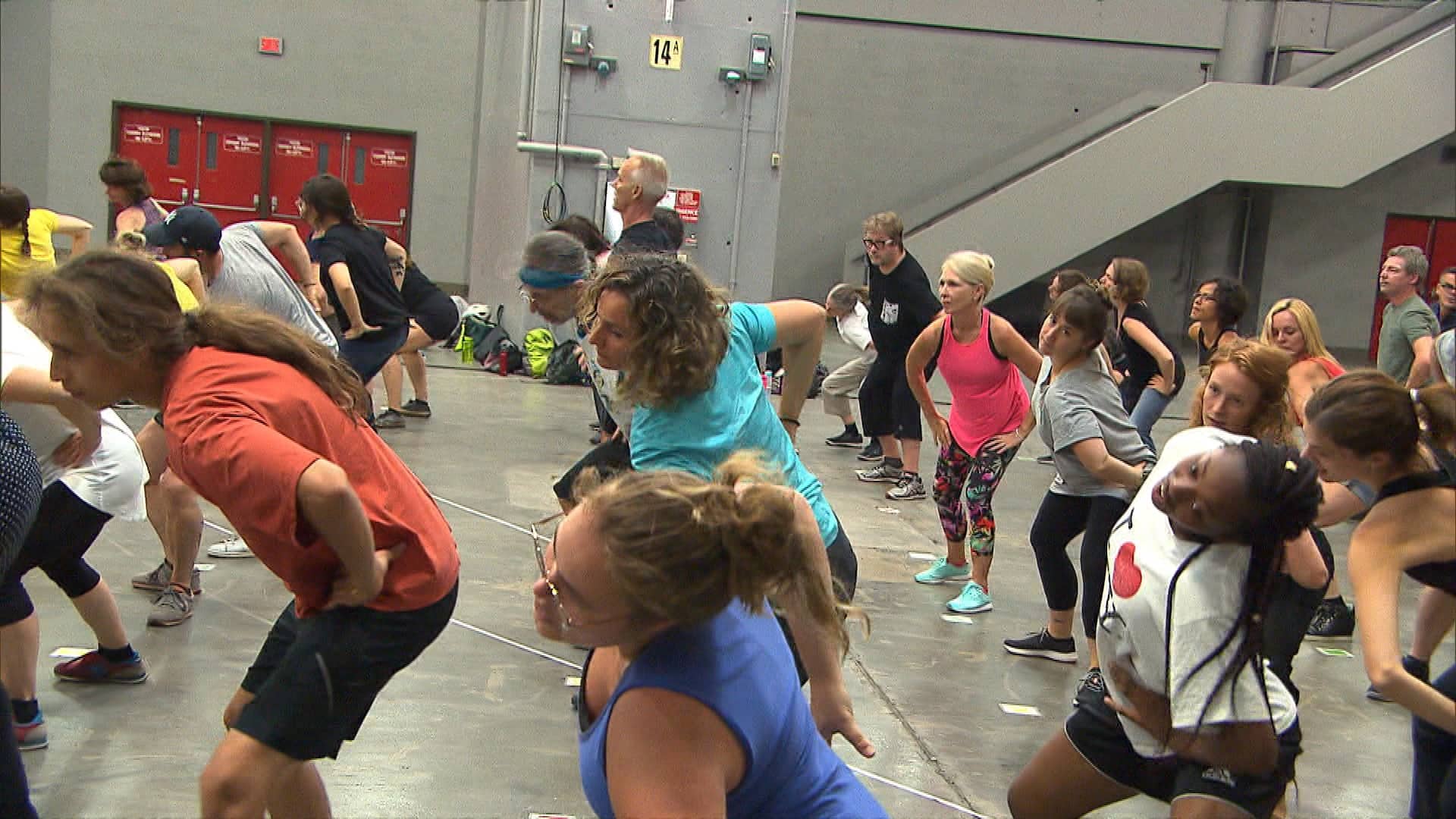 3 years ago
0:37
A group of exactly 375 Montrealers are participating in a dance show this September for the city's big birthday bash. 0:37

Yes, it is frustrating, and no I am not dancing the way I once did, but as I have discovered, I am far from the only one dealing with challenges — in fact, what I am dealing with pales in comparison.

Johanne Fontaine bounces in for every rehearsal, perfectly made up, trim, full of energy and laughter. You would never know she has stage four colon cancer, is undergoing chemotherapy, wears a band around her waist to hold in a tumour, and more often than not, is on morphine to dull the pain.

"I do get here feeling tired," she said. "But once I start dancing with everyone, I end up feeling re-energized."

Our rehearsals are demanding. They are twice a week, two hours at a time — yet Fontaine remains undaunted. As she sees it, being a part of this show is a way to celebrate life.

The first time I met Ingi Khouzam, she was leaning on a cane, hobbled by advanced arthrosis in her right knee. She wasn't sure she would be able to last through three months of rehearsals and four performances.

"I can't jump, jumps are out, and some of the moves, I have to be very careful when we turn on that knee," she said.

She has stuck it out, and discovered that dancing with everyone else "gives you a lot of energy."

Marjolaine Jacob has such severe scoliosis that she is in near-constant pain, and dancing doesn't exactly help.

That hasn't stopped her from staying with it. In fact, this will be her third time dancing with Émard, and she wasn't about to miss out on the chance to perform for Montreal's 375th anniversary.

"It is a big challenge for me to be able dance," she said. "But the Super Méga Continental is a collective effort and we're all working towards the same goal, so I forget my bobos."

It's what carries me through it too.

The appeal of Émard's show is that it celebrates our differences, our differing abilities, our limitations, all while we dance more or less in unison. So while some of us won't jump high, or at all, and I'll reliably fall over at different points, there is a beauty and infectious joy that shines through.

CBC's Anna Asimakopulos covered Montreal's arts and culture scene for longer than she can remember.