If you were up early, then you may have been lucky enough to get a peek of the spectacular moon and lunar eclipse above Montreal.

If you were up early, then you may have been lucky enough to get a peek of a spectacular combination of cosmic events this morning.

The phenomenon, which has been dubbed the "super blue blood moon," briefly graced the Montreal skyline before sunrise.

"It is kind of rare," said Kelly Lepo, the co-ordinator of the McGill Space Institute. "The last one happened in 1886."

So what exactly is a "super blue blood moon?" It's a combination of things.

A blue moon is the term given to the second full moon that occurs in the same month.

A super moon occurs when a full moon makes its closest approach to the Earth and appears slightly larger and brighter than normal.

There was also a lunar eclipse at the same time, which gave the moon a reddish tinge.

A lunar eclipse occurs when the Earth's shadow falls on the moon, blocking the light from the sun from directly hitting the moon, said Lepo. 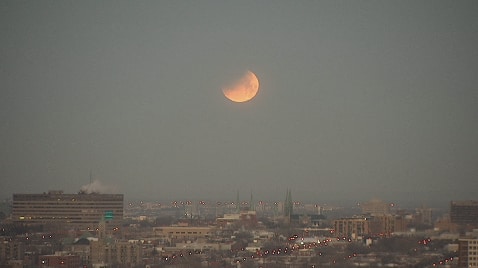 3 years agoVideo
0:46
Montrealers who were up early may been lucky enough to catch a glimpse of Wednesday's moon, which was a simultaneous series of celestial events. 0:46

Instead, sunlight is filtered through and  the Earth's atmosphere, and only the red light makes it through.

"We're seeing [the light from] all the sunsets and the sunrises from the Earth simultaneously fall onto the moon," said Lepo. "Isn't that cool?"

While the moon was more visible for those who live along the west coast, some Montrealers were able to see the celestial event before the sunrise thanks to a clear sky.

The confluence of these events happens about every 200 years, Lepo said.