Flash flooding, inundated basements, popped manhole covers and even a couple of storm-sewer geysers were reported across Montreal as heavy rain hit the city. 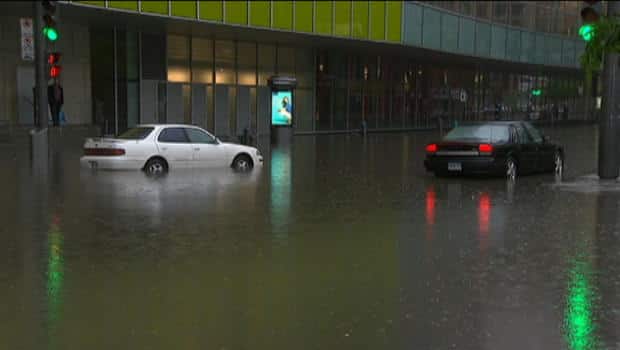 A pair of thunderstorms pounded the Montreal area on Tuesday, unleashing torrents of water that overwhelmed the city’s sewer system and caused widespread flooding of streets and buildings.

The storms caused power failures, forced major buildings to be evacuated, flooded basements and vehicles, shut down a Metro line, closed schools and even lifted off several manhole covers.

The water rose to nearly a metre deep in some streets.

In at least two places, high water pressure in overwhelmed sewer pipes sent up geysers of storm water from the sewers. One geyser nearly flipped a car on Wolfe Street in the city's Centre-Sud district. The other gusher, on St. André Street near St. Joseph Boulevard in the Plateau, rose up about two storeys.

In LaSalle, firefighters had to rescue two people from their car after they were stranded in a flash flood on St. Patrick Street. In Verdun, several homeowners said their basements flooded — in one house, a resident reported that their toilets, bath tub and sinks had all gushed from backed-up water. And institutional buildings including the Grande Bibliothèque du Québec and Concordia University's EV complex had to be evacuated.

Environment Canada said 40 millimetres of rain fell during the morning thunderstorm, which began around 5 a.m. ET, and a further 50 to 80 mm hit within an hour beginning at 5 p.m.

"To have that type of event two times in the same day, it was unusual," Environment Canada meteorologist André Cantin said.

Commuter train service on the Saint-Hilaire line was delayed nearly half an hour at the end of rush hour because of water accumulation on level crossings.

Video posted online showed water rushing onto the floor of a city bus, with seated passengers holding their feet up off the floor to avoid soaking their shoes.

Dawson College was evacuated because of water accumulation in the building. About 1,000 students were in the middle of writing exams when they were forced out of the school.

The Riverside School Board on Montreal’s South Shore said three schools, all in St. Lambert, are cancelling classes on Wednesday due to flooding: Chambly Academy high school, St. Lambert elementary and the Alternate School.

The English Montreal School Board said none of its schools is shutting down.

The storm even affected the Montreal Symphony Orchestra, which said its collection of musical scores was hit by the water. It was not immediately known how much damage the music collection suffered.

Hydro-Québec said 28,000 customers lost power, half of those in Montreal. Power had been restored to 6,000 of those households by nightfall.

Such heavy rainfalls are rare in the Montreal area, meteorologist Cantin said, occurring about once every five years.

There were tornado warnings issued for some areas of the Montérégie region, including Huntingdon and Lacolle, but so far there are no reports of damage.

The inclement weather was caused by humid air clashing with a cold front, triggering the heavy showers, thundershowers and high winds.