In a city known for its poutine and smoked meat, adventurous eaters like Veronica Boggia and Mike Sandev take Montreal foodie culture to a different level, testing the limits of how much and how fast it is humanly possible to eat.

Check out another side to the city's foodie culture, where it's about how much and how fast you can eat

Food Connections is a series that explores the ways food brings Montrealers together in celebration, adventure and social solidarity. It's a collaboration between the Department of Journalism at Concordia University and CBC Montreal.

This story is the work of a team of student journalists.

If you were asked to pick an extreme eating champion out of a lineup, Veronica Boggia would be the last person you'd point to.

When she walks into Pizza Spano in Dollard-des-Ormeaux, the slight 32-year-old doesn't draw a second glance.

However, when Boggia pulls her hair back and starts to single-handedly devour an extra-large meat lover's pizza that weighs in at just under three kilograms, people turn to stare.

"This isn't a pretty sight," Boggia warns before beginning. "There will be sauce all over my face."

Pizza Spano is just one of several restaurants across Montreal that offers an extreme eating challenge.

In a city known for its poutine and smoked meat, these challenges take Montreal foodie culture to a different level, daring adventurous eaters to push the limits of what's humanly possible to consume.

Everybody has their own reasons for accepting the challenge. Some extreme eaters do it for the rush. Others have turned professional. For Boggia, it's about setting herself apart.

"I'm kind of the freak of the group," she says.

Give me a pizza that 3-kg pie

It turns out, Boggia looks waif-like for a reason: she has ulcerative colitis. But it's her medical condition that gives her a physical edge.

"Food goes right through me, and I don't get that 'full' feeling people get."

It means she can eat vast quantities at a single sitting — and take on extreme eating champions who make a living at this "sport."

The Pizza Spano challenge is this: consume the biggest pizza in the house, right down to the dough ball in the middle, in under 45 minutes.

Boggia has done this before. She smashed former record-holder Randy Santel's time of 31 minutes and 56 seconds with her own 18 minutes and 51 seconds in 2017. This time, she is aiming to break her own record.

As she eats, the restaurant buzz dies away, and patrons and employees alike speak in hushed tones, so as not to disturb the star diner.

Two men at a nearby booth stop talking to observe her. The kitchen staff gathers at the counter, watching intently.

As Boggia finishes the last crumb on the tray, waitress Verena Loutfi calls out the time: "17 minutes and 10 seconds." 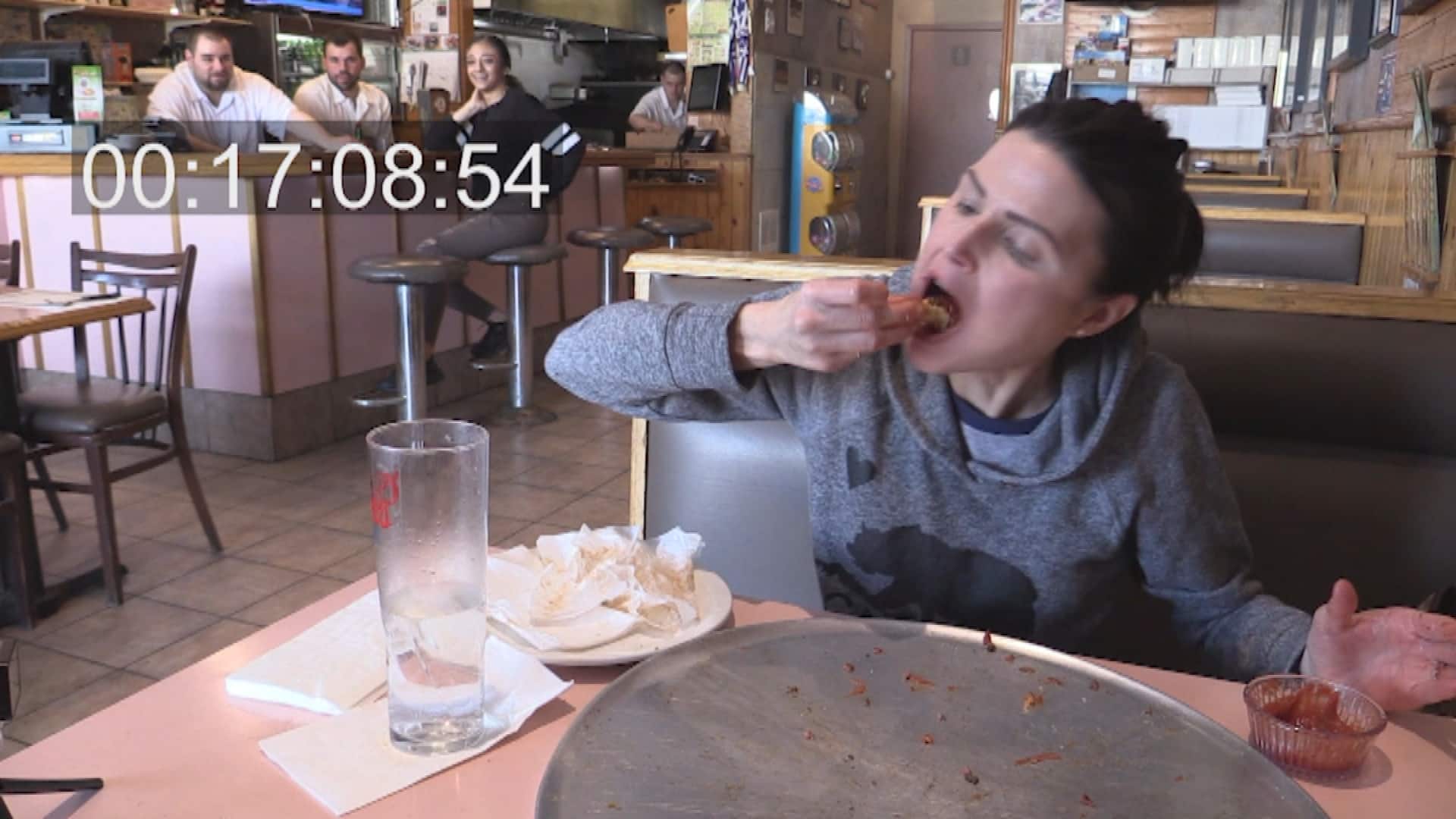 Veronica Boggia smashes her own record

The champ has beaten her own record by almost two minutes. The entire room bursts into applause, and Boggia looks over at the two men dining nearby.

"So, you impressed?" she asks with a grin. Then she lifts her chin. "You would have bet against me, wouldn't you?"

Hot and spicy — and borderline edible

Not all challenges test how much food competitors can eat.

The Rim Reaper Challenge at McKibbins Irish Pub offers competitors 12 chicken wings coated in a sauce made from one of the world's hottest and most expensive peppers — the ghost pepper.

"We always give warnings out to customers who try it," says Cameron Mackay-Bee, a 28-year-old chef at the pub, setting a glass of iced milk next to his own platter of wings."Someone had to get their stomach pumped after consuming it."

Even after nine years' experience with the Rim Reaper Challenge, Mackay-Bee approaches the wings with apprehension.

"I did a shot of [the sauce]. It was instant regret. I wasn't able to finish my shift that night, and I was very sick the next day," he says.

Just being near the ghost pepper wings makes the back of your throat tingle, and your eyes tear up. Despite that, the challenge is extremely popular — especially among university and CEGEP students who think they are invincible after a few drinks.

"They try it during Frosh Week. That's when they're nice and intoxicated. It's not fun watching someone complete this." His eyes filled with tears, Mackay-Bee calls it quits after finishing just one wing.

"It's easier than I remember," says Mackay-Bee, setting down the bones from the finished wing. "No wait, that's a lie," he exclaims, as the heat sets in.

From experience, he's learned that the pain lingers for half an hour. Mackay-Bee has tried sugar, milk, bread: all to no effect.

A meal fit for a knight (or a Mike)

It's a hamburger made up of a patty that weighs nearly one kilogram, stacked so high with half a kilogram of bacon, tomatoes, lettuce and the rest of the fixings that it cannot be picked up with one's hands.

The waiter cuts it in half, handing Sandev the large serrated knife to carry out the rest of the attack on his own.

Not for the faint-of-heart — or stomach — this challenge comes with a $90 price tag and bottomless fries for life for anyone who can finish it before closing time.

An hour has passed, and Sandev is halfway through the burger when the door at the top of the stairs opens, and more than a dozen 13-year-olds stream out of a room where a birthday party's been underway. As they head past Sandev, they catch sight of his plate. The teens gather round, their jaws dropping in awe and delight.

"Does he really have to eat it all?" asks one, as Sandev picks up another handful of the burger.

Finally, Sandev raises his arms in defeat. There is still some burger on his plate, about the size of a small fast-food order — but his smile is wide.

"How do I feel?" He muses over the question. "More stuffed than a turkey!"

MORE IN THIS SERIES:

Food Connections is a series that explores the ways food brings Montrealers together in celebration, adventure and social solidarity. It's a collaboration between the Department of Journalism at Concordia University and CBC Montreal.