Raji Abi Rached tries to give out free meals to homeless people whenever he can, especially when it's cold outside.

Raji Abi Rached tries to give out free meals to homeless people whenever he can, especially when it's cold

Raji Abi Rached, who owns the Amir restaurant at the Place Versailles shopping centre, is trying to make the city a more welcoming place, one plate at a time.

Abi Rached bought the franchise five years ago and says he often gives out free meals to homeless people in the area, especially when it gets cold outside.

His restaurant is in the mall across from the Radisson Metro station, where some homeless people hang out.

When they come inside the mall to warm up, Abi Rached is quick to call them over.

"Every time they pass here, we call them; we give them food, or they come, they ask us," he told CBC. "It doesn't take much to do what we're doing. It's a small gesture that can help a lot. It makes a big difference for other people."

So while Abi Rached's staff is used to giving out a meal to someone in need, he decided to try and spread the word online, hoping to encourage others to do the same.

On Saturday, he responded to a tweet posted by Mayor Valérie Plante, letting her know what he was doing.

"I wanted to influence people to do the same. I wanted this to be contagious," he said.

"We are looking to get more people to do like we are doing, so we can change the world and make it a better place."

His tweet was shared widely, and his name was trending in Montreal over the weekend.

"I am so surprised that everyone is encouraging; everybody was retweeting; everyone was pushing for it," he said.

The word spread quickly in his neighbourhood — among paying customers, too. 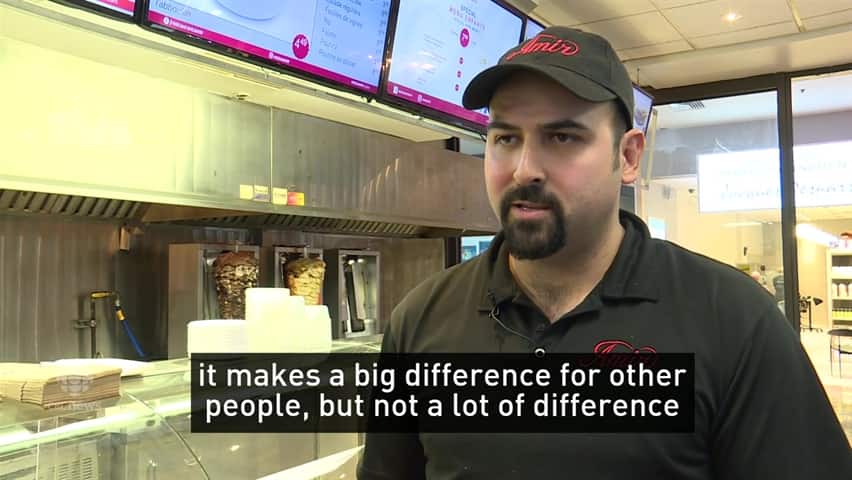 3 years ago
0:52
Raji Abi Rached owns Amir, a restaurant in Montreal's east end. He feeds homeless people for free, especially when it's cold out. 0:52

"I think it's a great idea, and if it can inspire other people, it would be great," said Nathalie Viel.

For Abi Rached, he hopes the goodwill can extend beyond Christmas and into the new year.

With files from Sean Henry