A video recording of Montreal police shows a young man being punched repeatedly in the face by officers at an anti-capitalist protest last Friday. 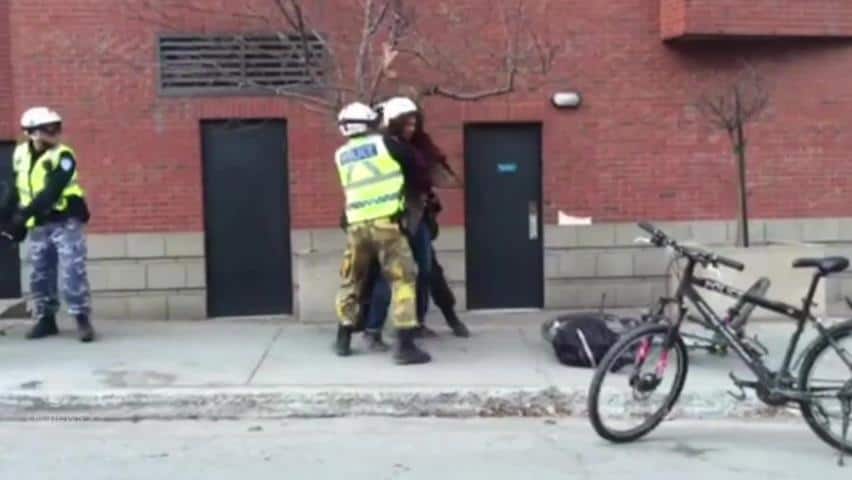 RAW: Montreal police punch person in the face at May Day protest

6 years agoVideo
0:32
Police officers hold a man with his arms up while one of them punches him in the face in this video shot by a witness 0:32

A video recording of Montreal police shows a young man being punched repeatedly in the face by officers at a protest last Friday.

The man, who appears to be in his early 20s, was sitting on the ground near Hutchison and Sherbrooke streets near an anti-capitalist demonstration.

The video shows police holding the man's arms behind his back then punching him repeatedly in the face. At one point, he frees his hands and puts them in the air.

In the recording, police are seen lifting him up and then pulling him to the ground as he struggles.

Claudéric St-Amand, who was driving by when he shot the video on his phone, says it looked like the young man was separated from other protesters. When he tried to go join them, police closed in.

"Just before he was hit by police, he was sitting on the ground with his arms crossed, a sign of peace," said St-Amand.

He said there were more than 50 police officers near the street corner.

St-Amand said he has a son around the same age as the man who was beaten by police.

"I don't understand the anger towards young people who want to have a voice," he said.

Though the main protest was on Ste-Catherine Street, smaller protests like the one on Sherbrooke Street popped up.

Montreal police spokesman Ian Lafrenière told Radio-Canada reporter Pascal Robidas the police are looking into the video and trying to determine the identities of the police involved.

He has not issued a statement or explanation.

On Friday night, police said the protests were especially difficult to quell because protesters went to three different parts of the city.

The anti-capitalist protest, organized by the group CLAC, led to 84 arrests across the city, including 27 on criminal charges.