A former RCMP officer says the amount of force "appears to be excessive at first sight" in a video of a young black man thrust to the ground by a Montreal police officer.

A former RCMP officer says the amount of force a Montreal police officer used to arrest a young black man "appears to be excessive at first sight."

The cellphone video, filmed outside Henri-Bourassa Metro just after 5 a.m. Monday, shows the handcuffed young man being thrust to the ground by an officer, who then tells him to listen to him and get in the police cruiser.

The officer then picks the young man up and throws him in the back of a police cruiser, feet first.

An SPVM officer says at the end of the video that he was responding to a citizen complaint.

"You see a great deal of force in use by the police officers, and on someone who is a much smaller and also handcuffed," said Babineau, who now works for the Centre for Research-Action on Race Relations (CRARR).

CBC News has been unable to determine the identity or age of the young man. The video begins after he is already in handcuffs.

In a statement, Montreal police said they can't comment on the incident since it's under "analysis" by the local police station.

A server at a nearby bar told CBC News police were called around 5 a.m. after a patron alerted them to suspicious activity in the parking garage next door.

Watch the video below: 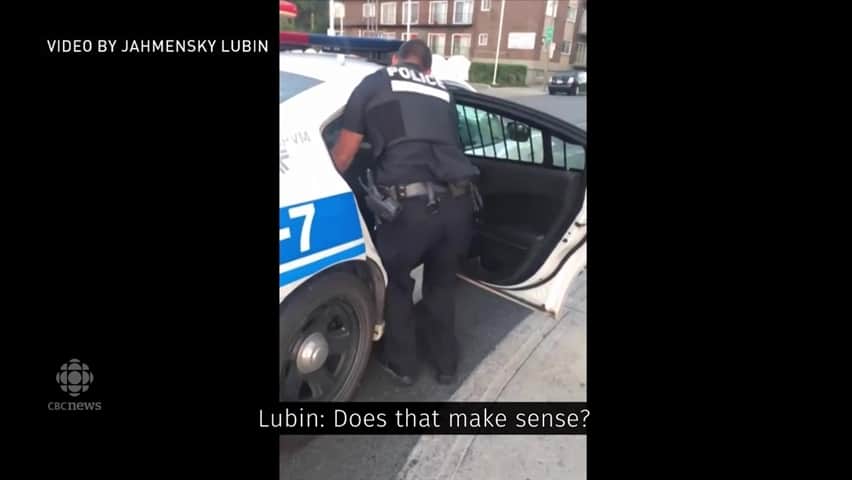 1 year agoVideo
1:45
This video was submitted by Jahmensky Lubin whose voice can be heard on the tape. 1:45

Jahmensky Lubin, who recorded the video on his phone, said he was heading home from work when he saw police with the young man, and grew suspicious when police frisked him for what seemed like an unusually long time.

"Before I got there, it wasn't a violent situation," Lubin said. The young man in the video appears calm during the altercation.

Lubin said he believes the amount of force used was not acceptable.

After the young man was put in the car, a second officer approached Lubin and asked him to back away from the vehicle.

Lubin posted the video to social media later that day. It has since been widely shared.

Babineau encourages people who feel their rights have been violated to to seek assistance from organizations such as CRARR. He said the organization will not investigate the incident until the young man contacts them.

Citizens have a right to film police interactions as long as they aren't interfering, he said, and encourages citizens to film incidents of possible police brutality. He said CRARR wants police to wear body cameras.

Montreal Mayor Valérie Plante said earlier this year that the city would not equip officers with body cameras, because the equipment would be too costly.

When police use excessive force, it contributes to an "us against them" dichotomy that's common in Montreal and surrounding police agencies, Babineau said.

"Police … have a job to do," Babineau said. "But they also have responsibilities in terms of treating people with respect and choosing not to use their force excessively."

With files from Kate McKenna and Jaela Bernstien