A second day of bombshell testimony from a former construction magnate reveals that Montreal Mayor Gérald Tremblay's political party got payments from companies tied to the value of city contracts they received. 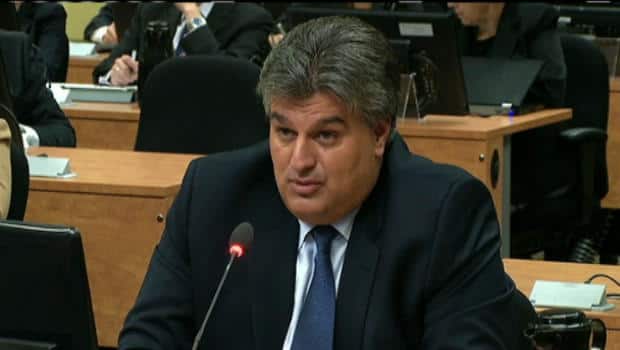 8 years agoVideo
2:43
A former construction boss claims 3 per cent of each of his contracts with the City of Montreal went to Mayor Gerald Tremblay's political party 2:43

Montreal Mayor Gérald Tremblay's political party got payments from construction entrepreneurs tied to the value of contracts they received, a former participant in the scheme said Monday in his second day of bombshell testimony at Quebec's corruption inquiry.

Onetime Montreal construction mogul Lino Zambito told the Charbonneau commission that three per cent of the value of each contract was funnelled back to Tremblay's Union Montreal.

Zambito said the money was paid to former Mivela Construction president Nicolo Milioto, who has been identified by police and Zambito as a middle-man between construction magnates and Montreal's Rizzuto crime family. Zambito said the payments began in 2005 or 2006, and Milioto told him they were destined for Union Montreal.

It's the first time at the inquiry that testimony has linked direct payments from construction entrepreneurs to Tremblay and his party.

'No illegal financing going on'

Tremblay held a media scrum within hours to say that his municipal party's finances have been verified every year by Quebec's chief electoral officer without any findings of wrongdoing.

"That rumour of the three per cent has been going on for a while, and as a result of that I verified, I asked my official agent to verify and I was assured that there was no illegal financing going on of my party," Tremblay said.

He said his administration is trying to crack down on construction-company corruption by delaying all non-urgent city work until the province can bring in new legislation to give municipalities more powers to control the tendering process.

A feisty Tremblay also scolded the media for calling on him to react almost daily to the fresh revelations at the inquiry in Montreal.

"I won't comment every time there's allegations at the Charbonneau commission.... We're going to wait for the findings and recommendations of the commission."

Engineer got a cut, Zambito says

Monday's allegations from Zambito aren't the first time he has said construction companies paid a cut of their revenues.

According to his testimony last week at the Charbonneau commission, Milioto also collected a 2.5 per cent "tax" from city construction contractors that went to the Rizzutos. On RCMP surveillance video secretly recorded at the Rizzutos' former hangout in the Montreal neighbourhood of St. Léonard, Zambito and other industry bigwigs can be seen handing over wads of cash to Milioto. Other segments show Milioto and Mob bosses splitting up the money into piles and handing some of it to onetime Montreal Mafia godfather Nicolo Rizzuto Sr., who stuffs it into his socks.

A further one per cent cut, Zambito said Monday, was paid to the city engineer who approved contracts. There was a running joke that the official claimed a one per cent "GST" — the name being a tongue-in-cheek twist on the French-language acronym for the federal sales tax. It was apparently named for, and by, engineer Gilles Surprenant, according to Zambito.

"He picked the name himself," Zambito said. "TPS meant 'Taxe Pour Surprenant.' At the time, it was one per cent of the value of the work."

Surprenant is one of two city engineers who Zambito said vacationed with him at a resort in Mexico partly owned by his father, Giuseppe Zambito. The other engineer, Luc Leclerc, admitted to CBC's French-language channel over the weekend that he was in Mexico with Zambito and Surprenant, but said he thinks he paid his way, though he can't be sure.

Zambito first took the stand on Thursday, when he made stunning disclosures about how construction companies colluded to divvy up city work among them and rig the prices of contract bids. His testimony will take several days, a Charbonneau commission lawyer said Monday.

Retired city engineer Leclerc said he will be called to testify as well at some point.