"I honestly feel because I didn't tell him where I was going, because I wasn't polite with him, he got upset. And that's why he decided to give me a ticket," said Lateef Martin.

Lateef Martin was walking along Messier Street in Montreal's Plateau neighbourhood around 1:30 a.m. Saturday when he was ticketed for not using the sidewalk.

He says he was leaving a friend's house and chose to walk in the street because the sidewalks were slick with ice and snow.

"So, naturally, I'm walking in the street because the street is a lot safer," said Martin.

He said he was being especially careful because his friend fell and hurt her knee on the same sidewalk earlier that day.

When a car approached, he moved to the side. It was a police cruiser, and he says an officer inside asked if everything was OK, to which he replied, "yes."

"He seems flabbergasted that I refused to tell him where I'm going."

He says that's when the officer told him he would be ticketed for walking on the road, and that if he refuses to provide identification, then he'll be arrested.

"I honestly feel because I didn't tell him where I was going, because I wasn't polite with him, he got upset. And that's why he decided to give me a ticket," said Martin, who posted a video of part of the exchange with police on Facebook.

He was ticketed $48 for violating Article 452 of the Quebec Highway Safety Code, which states: "Where there is a sidewalk bordering the roadway, a pedestrian must use it." 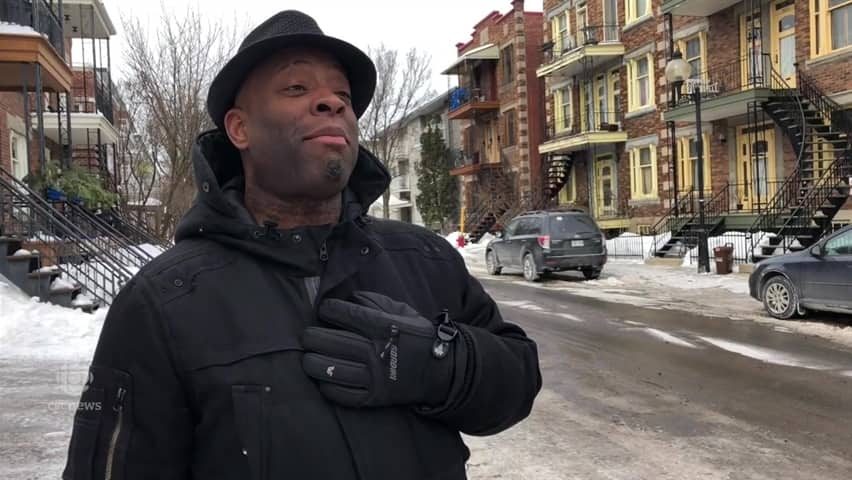 Montreal man fighting ticket for not walking on icy sidewalk

2 years ago
0:57
Lateef Martin was walking on a residential street early Saturday when he was questioned by police. 0:57

Montreal police declined an interview, instead sending CBC Montreal the section of the Highway Safety Code cited on Martin's ticket.

Martin, who is black and was walking with his hood on, says race was a factor in the exchange.

"Automatically, the Trayvon Martin situation came into my head," he said. "The fact that I'm wearing a hood and there's a police authority there harassing me."

He is planning to contest the ticket.

A Montreal lawyer who regularly consults clients on traffic offences thinks he has a good chance of winning.

The law states that a pedestrian must use sidewalks, but that if they are impossible to use, then the pedestrian can walk along the road as long as they ensure they're not putting anyone in danger.

"I don't see how this ticket would be warranted if he says that as his defence," said Levy, who is also the co-founder of Ticket911.ca, which offers legal advice for people who get traffic tickets in Ontario, Quebec and New York state.

He recommended Martin bring pictures of the sidewalk and copies of the weather report for that week when he contests his ticket.

Martin said he decided to contest the ticket to try to spur a change in police practices.

"We need to stand up and say it's unacceptable. And the only way that's going to happen is when people make a point of it," he said.