Rooms abandoned when the Royal Victoria moved to the Glen site four years ago have been outfitted for a new clientele: people with nowhere else to sleep on cold winter nights — and their pets, as well.

'It's an experiment, but we think it's one that is going to work,' says CEO of Welcome Hall Mission

On the third floor of the 103-year-old greystone Ross Pavilion, rooms abandoned when the Royal Victoria moved to the Glen site four years ago have been outfitted for a new clientele.

People with nowhere else to sleep on cold winter nights — and their pets, as well, have a new place to stay.

Thirty-one people were there the first night, and 62, the second — but no pets, so far.

The expectation is those numbers will increase as word gets out that all — men, women, trans people — are welcome here, and as the temperatures turn colder, said Sam Watts, CEO of the Welcome Hall Mission.

"It's an experiment, but we think it's one that is going to work because we're working with all our partners," he said.

The project is a joint effort between the CIUSSS du Centre-Sud-de-l'Île-de-Montréal, the City of Montreal, the Quebec government, the Welcome Hall Mission, the Patricia Mackenzie Pavilion, Acceuil Bonneau, Maison du Père, the Old Brewery Mission, the SPCA, the Red Cross and others.

Watts said the partners regularly work together on other projects, which made it easier to band together and get the shelter up and running in 30 days. 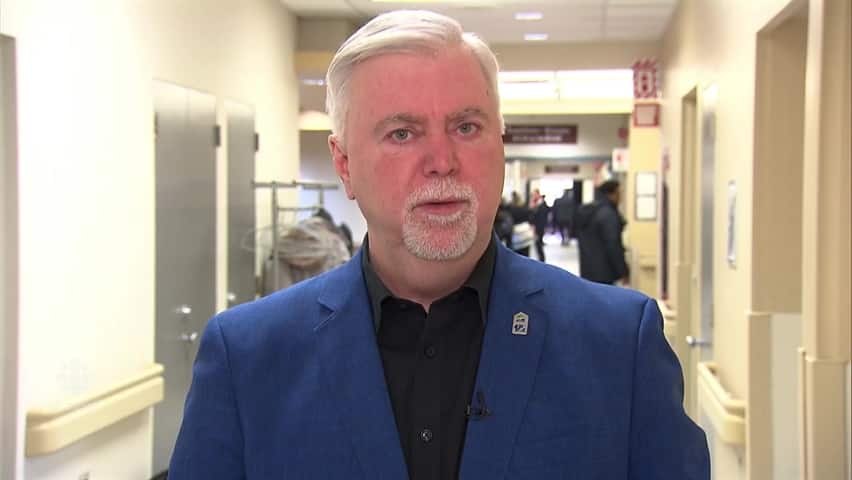 2 years ago
1:11
When Montreal's homeless shelters are full, there's now somewhere else to go. The old Royal Victoria Hospital has beds for 80 homeless men, women and transgender people. Their pets can come in and get warm, too 1:11

The shelter is open every day from 9 p.m. until 7 a.m. until mid-April.

The shelter is for overflow only — so when one of the downtown locations is full for the night, people are transported on the Old Brewery Mission's shuttle bus to the site on Mount Royal.

A security guard greets the users at the front door, and there are four guards working on the floor where everyone sleeps every night, regardless of how many people show up, said Bruce Lapointe, chief of security at the CIUSSS du Centre-Sud-de-l'Île-de-Montréal.

Weapons and alcohol aren't allowed, but those who show up intoxicated aren't turned away.

A social worker from the Welcome Hall Mission is on site as well.

The setup is minimalist — each room has a few cots, on loan from the Red Cross, and a ring on the wall.

Dog owners can tie the animal's leash to the ring, ensuring their companions can sleep nearby. There are also cages available, if needed.

It's not just dogs that are welcome — any pet, in theory, can accompany its owner to the shelter, Lapointe said.

The rooms aren't designated for men or women specifically — everyone is housed on the same floor, but at different ends.

"We always keep a distance between the men and the women, and there is always a security guard between them," Lapointe said.

There is a defibrillator, as well as two naloxone kits, the medication administered in cases of opioid overdoses.

The SPCA also trained the security guards to recognize signs that the animals are in distress and how to intervene.