Feds, province confident they can handle influx of asylum seekers in Quebec

Despite a spike in the number of asylum seekers illegally crossing into Quebec in recent weeks, government officials believe they are equipped to handle the influx. However, the union for federal border services agents is pleading for more resources at the Roxham Road border crossing.

Despite a spike in the number of asylum seekers illegally crossing into Quebec in recent weeks, provincial government officials believe they are equipped to handle the influx.

But citing a similar influx in 2008, when 12,000 applications for asylum were made in Quebec, Weil said the province can manage the present situation.

"We have a public and community network that is strong, competent and experienced that can handle this kind of situation, can take responsibility for these people in a dignified and safe way and provide them with the services that they need during the processing of their claims," she said during a news conference Thursday.

What's notable this time around is the pace of claims, she said. The number of claims has jumped from 50 a day to 150 a day in the last two weeks.

That pace, she said, is exerting significant pressure at the border and also on the province's ability to find temporary housing for those arriving.

Montreal's Olympic Stadium was made into a shelter to temporarily house the asylum seekers Wednesday. It will cost the government $1.5 million to rent that space and provide security until Sept. 19, according to Public Health Minister Lucie Charlebois.

Weil said it's believed 70 per cent of the people crossing from the U.S. into Quebec are Haitian, who may be leaving the U.S. in fear they'll be deported come January.

Weil said there is no guarantee those who are crossing the border will be able to stay in Canada, but the province's goal is to make sure they are providing the best services possible and help quell any anxieties the asylum seekers have.

Though official numbers for July have not been released, the provincial organization tasked with helping asylum seekers estimates that 1,174 people crossed into Quebec last month, compared with 180 people in July 2016.

That number is dwarfed by the figures provided to CBC's The House by Jean-Pierre Fortin, president of the Customs and Immigration Union. Fortin says 1,100 people have crossed into Canada at the makeshift border crossing on Roxham Road, in Hemmingford, Que., in the past 48 hours.

"We need more resources," he said, explaining that the union is fielding complaints from border services agents who say they're not being kept abreast of the federal government's plan for managing the crisis. "We don't see a clear direction right now.... Our people are working something like 25 days in a row, and overtime."

Fortin said the RCMP officers helping with security at the border are also struggling. He said they are working out of cramped tents and, in this hot weather, "it's not a very easy task they are performing."

Feds have 'no plan,' Conservatives claim

The federal government's preparedness for the influx was questioned Thursday by Conservative MP Michelle Rempel, the party's immigration, refugees and citizenship critic.

In a news release, Rempel said the government has known the influx was coming, but failed to put a plan in place for dealing with it.

"This abdication of responsibility will further backlog our systems at a time when the Immigration and Refugee Board is already reporting 11-year wait times for refugee hearings and is experiencing an alarming shortage of immigration judges," Rempel said.

She said further stress on the system could bring Canadians to question the integrity of the country's immigration system.

In an interview on CBC Montreal's Daybreak, Weil said she spoke with Immigration Minister Ahmed Hussen Wednesday night, and that various provincial ministries and community organizations have been working in concert with the federal government for months.

"We're capable of handling it if we're well organized," she said.

Weil was joined by Charlebois and local MPs Marc Miller and Emmanuel Dubourg, as well as a number of community representatives, at the news conference in Montreal.

Charlebois said there are a total of 10 centres of varying sizes providing temporary housing to asylum seekers as they wait for more permanent shelter.

She explained they are trying to house greater numbers of people in the same place to make it easier to provide them with services.

She added that they are going through health assessments, and psychosocial support is also available.

"Those people are living with difficulties now. They're moving with no money, not a lot of things, and it's a little bit traumatizing," she said.

Miller echoed Weil's comments, saying the federal government is working closely with the province and adding resources to attempt to process refugee claims effectively and in a timely manner while still subjecting claimants to "robust" screening procedures. 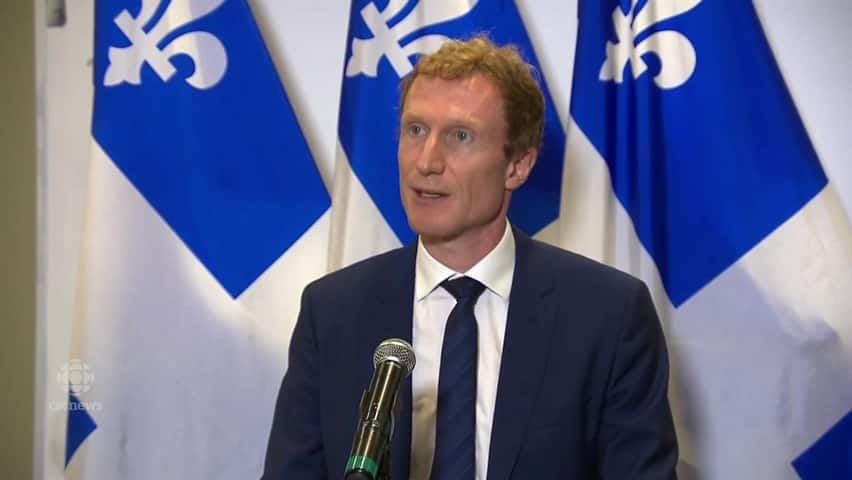 Miller on Ottawa's response to the influx of Asylum seekers

With files from Ryan Hicks, CBC's The House and CBC Montreal's Daybreak