Go inside the Montreal house where gamers play, practise and live

Since February, members of the Montreal Rebellion esports team have been living and practising their craft in a six-bedroom house in Montreal's Ahuntsic-Cartierville neighbourhood.

It's a Sunday afternoon and 10 young men are sitting in front of rows of computers in what was once the living room of a red brick, two-storey home in Montreal's Ahuntsic-Cartierville neighbourhood.

They are all playing Overwatch, a first-person shooter video game, while sitting in identical oversized black office chairs and speaking to each other through headsets.

The once-spacious living room now looks like a cross between an internet café and a call centre.

The room is where the Montreal Rebellion, a semi-pro esports team, practises and competes against other teams around the world.

Since February, the team, their two coaches and a general manager have been living and practising in this six-bedroom house on a quiet suburban street.

In the world of esports, they live in what's known as a gaming house.

The members of Montreal Rebellion train at the house for nine or more hours a day, six days a week.

The majority of the players are from the U.S., hailing from states such as Florida, California and Illinois. There's one player each from Belgium, Denmark and Latvia.

Having a team made up of players from all over the world is normal in esports, because the games are played on the internet.

However, getting teammates together for long hours of practice is complicated, since they often live in different time zones.

A gaming house brings an esport team together under one roof.

"What better than to get all the players in one location playing at the same time — you know getting to really know each other," said Joshua Small, a 22-year-old player from the Chicago area.

When he was young, Small began to notice he was way more skilled then his friends were at playing video games.

He quickly jumped into playing pro and he's been playing Overwatch for three years.

It's Small's first time living with a group of people far from home, which is partly why he's here.

"I thought it would be a good experience," he said.

Being in a gaming house also means he able to play on high-end PCs that he can't afford to have at home.

But most of all, the house is a place where he can focus on succeeding at pro gaming, surrounded by like-minded people.

"It provides a place where you can compete with others and be the best at it."

Among the first of its kind

The gaming house for the Montreal Rebellion is among the first of its kind in Canada. While they are a new phenomenon here, they're commonly used by professional esport teams in Los Angeles and South Korea.

The Rebellion is owned by OverActive Media, a Toronto-based company bringing esport franchises to Canada.

OverActive is paying the rent for the house, buying food for the players and coaches and giving them a small salary.

"We are here all the time. Even in the downtime … we're still talking about the game. When you think about the amount of hours you put into it, you have to love this," said Myrick.

The match they are training for will help decide if they'll earn a playoff spot in the Overwatch Contenders League, a development league similar to the NHL's American Hockey League.

Hundreds of thousands of dollars are up for grabs, plus exposure for the players, which can increase their chances of being called up to the professional Overwatch League.

Check out the gaming house, one of the first in Canada: 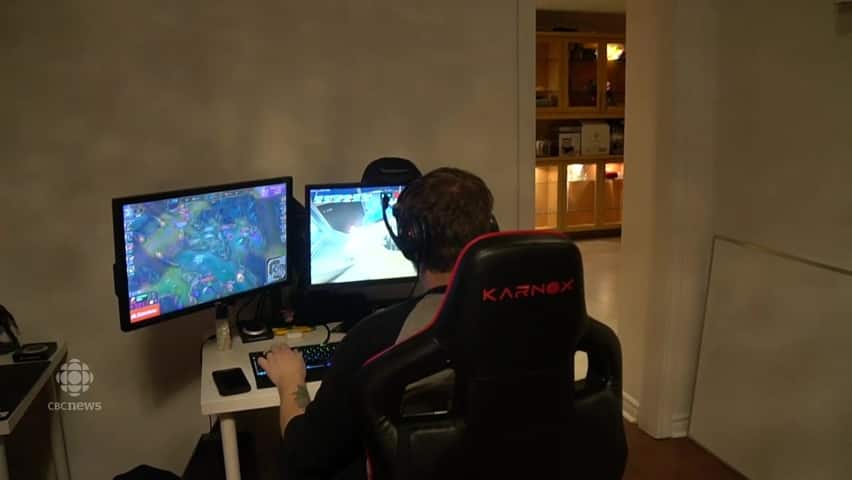 A place of work

All the players are under 25, so the house looks as you'd expect.

There are barely any decorations on the walls. Packages of ramen noodles are everywhere in the kitchen and there isn't much furniture besides tables and chairs.

The bedrooms are split between the second floor and the basement, with most of the teammates sharing rooms.

The rooms where the players sleep have the feel of a university dormitory. They sleep on a single-sized mattress and next to many of the beds are half-unpacked suitcases.

"The bedrooms in general are pretty low key, mostly … if you want to just chill on your phone or on your laptop," said Myrick.

When asked if they ever party in the house, Myrick's response is unequivocal.

"There have been no parties here, not really anything even close to a party. No partying, lots of work happens here."

Because of the gruelling practice schedule, Myrick and the rest of the team hasn't seen much of Montreal beyond the popular tourist sites.

However, Myrick, who is from Florida, did make it to a Poutineville. But he wasn't overly impressed by Quebec's signature dish. He said he needs to dress up his poutine with meat in order to enjoy it.

Their playoff qualifying match is against Second Wind, a Chicago-based team.

The game is streamed live online and packaged like a big-ticket sporting event, with graphics and announcers giving a play-by-play.

The Rebellion win the game handily, 3-1.

The Montreal Rebellion win one game in the playoffs and then lose to Fusion University, a farm team for a Philadelphia Overwatch team.

With the loss, the players pack their bags and fly home.

After about three months of non-stop gaming, the house is empty. But not for long — the new season starts sometime in June.

Small expects he'll be back for the summer. He said living in a gaming house is an experience he won't forget.

"I never thought I would have the opportunity to play in a room with a bunch of friends," he said.

"I learned things I would not have learned had I not been in Montreal."