Hisham Saadi, 47, has been charged with carrying out a hoax regarding terrorist activity, uttering threats and mischief in connection with the Concordia University bomb threat Wednesday. 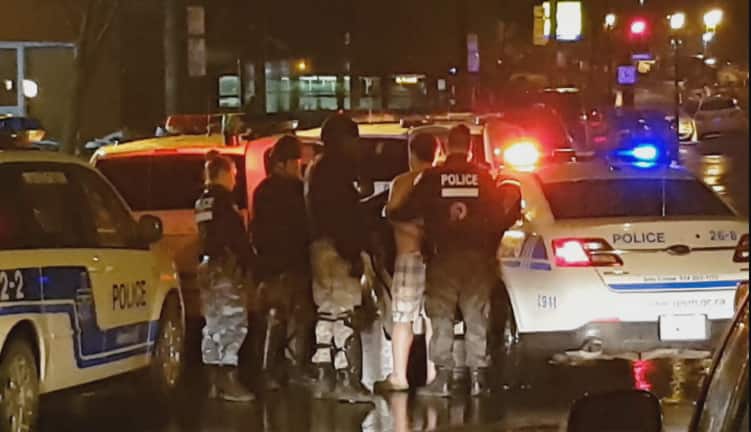 4 years agoVideo
0:39
The man was arrested around 1:30 a.m. ET Thursday after officers descended on an apartment on Darlington Avenue near Goyer Street in the Côte-des-Neiges neighbourhood. Video courtesy Joshua Abenson. 0:39
Hisham Saadi, 47, has been charged with carrying out a hoax regarding terrorist activity, uttering threats and mischief in connection with the Concordia University bomb threat Wednesday.

Saadi appeared in a Montreal courtroom via video link on Thursday afternoon.

He has been ordered to undergo a psychological assessment prior to his bail hearing, scheduled for Friday.

Saadi was arrested around 1:30 a.m. ET Thursday after officers, including members of the force's tactical and canine units, descended on an apartment on Darlington Avenue near Goyer Street in the Côte-des-Neiges neighbourhood, said Const. Benoit Boisselle.

The operation came a day after three buildings at Concordia's busy downtown campus were evacuated. A letter saying explosive devices were placed in various areas of the school was sent to a number of Montreal media outlets, including CBC News.

Police found nothing suspicious during their search of the Hall building, Guy-De Maisonneuve building and the engineering, computer science and visual arts (EV) integrated complex, and handed the case over to the major crimes division.

Saadi is not known to police. He did not resist arrest, Boisselle said.

Boisselle said it's unclear whether the man has any ties to the university, but CBC spoke to the man who sublet his apartment to Saadi.

The man, who spoke to CBC's French-language network Radio-Canada, under the condition of anonymity, said Saadi was a PhD student in economics at Concordia. He had met Saadi at Concordia to pick up a rent cheque.

"I think he has [Canadian] citizenship," he said. "He has been here for many years," the man said, adding that Saadi is of Lebanese origin.

Police searched the apartment for almost five hours. No explosives or anything to do with making bombs were found on the premises.

Forced to leave in middle of the night

About 30 people were forced from their homes during the police operation due to the concern there could be explosives inside the apartment building.

Joy Agbonze, who lives in the building, said that police arrived at her door after midnight and told her to gather a few things and leave.

She was told to wait in a city bus outside but wasn't told what was happening.

"I was a bit freaked out because there were cops in bomb squad gear and everything, and I was like, 'Oh my God, what the hell is happening,'" she said.

Residents initially didn't know what was going on, but were eventually told the operation was in connection to the bomb threats. Agbonze was on the bus, which served as a shelter, for about 30 minutes before she was allowed back inside.

She said though the situation made her feel less safe in general, the police operation helped assuage her uneasiness.

The arrest didn't comfort Aouatif Zebiri, a student at Concordia and member of the Muslim Students' Association.

The threatening letter purportedly came from a group that calls itself Council of Conservative Citizens of Canada. Since it's still unclear if the man who was arrested will be charged or if he's linked to that group, she isn't feeling reassured.

In an interview on CBC Montreal's Daybreak, she said she won't be going to the buildings that were targeted any time soon, but that overall she feels safe at school.

"I would say it's rare to find students at Concordia who are Islamophobic. We are united, we believe our diversity makes us united and we cherish that," she said.

All the buildings that were evacuated were reopened by 6 p.m. and classes went on as scheduled, a move that was criticized by some students, including Zebiri.

"Students had been through a traumatic experience. How do you expect them to go back to school?" she said.

Concordia spokesperson Chris Mota, also a guest on Daybreak, said the university felt that resuming operations at the earliest possible time was an expression of resolve.

"We certainly would not have continued classes if we felt that there were any issues outstanding or any possible threat."

Because the letter containing the bomb threat mentioned a 48-hour window ending Friday afternoon for the explosives to be detonated, Concordia says it will increase patrols of its private security officers. Montreal police will also be present on campus for the next few days.

Zebiri said she isn't in favour of that measure, because students from minority groups may feel uncomfortable with having more security guards around.

Mota said while she doesn't get the sense that people at the school feel threatened on a day-to-day basis, she acknowledged that some people do.

The university will do anything it can to help students who are feeling that way, she said.

Mota reiterated that the Concordia community is united, and that an attack targeting one group of students is an attack on the entire university.

"It threatens our values, it threatens our way of life, it's just not who we are. It's reprehensible and I think we're going to come together as we always do," she said.