The children's book and CD, Time for Flowers, Time for Snow, is launched tonight at Montreal City Hall. The ancient Greek story of Persephone is told in song through the voices of 183 students from elementary schools in the Montreal area.

Time for Flowers, Time for Snow re-tells the ancient Greek myth in song 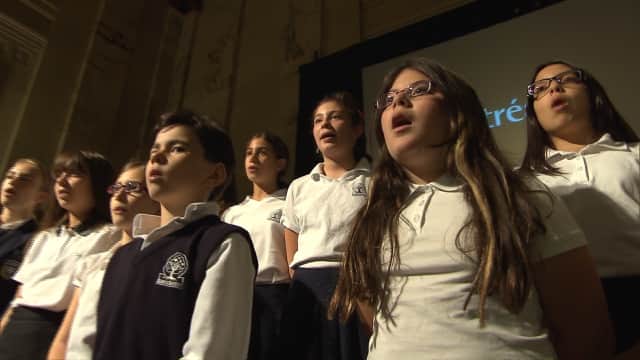 Time for Flowers, Time for Snow

7 years agoVideo
2:10
A Montreal children's choir helps launch a CD and book based on Persephone's story. 2:10

Time for Flowers, Time for Snow is a children's book-CD that re-tells the ancient Greek myth of Persephone.

The story is told in song through the voices of 183 students from elementary schools in the Montreal area.

It's being launched tonight in the Hall of Honour at Montreal City Hall.

"It was a lot of fun to work on, especially since all my friends were there," said Sarah Mucci, a student at Pierre-de-Coubertin Elementary School.

The choir was founded by Dimitris Ilias and Maria Diamantis. Both are well-known in Montreal's Greek community, where they have been teaching and coaching kids' choirs for years.

They've produced several book-CD projects over the years but, until now, they were all in Greek. With this new English-language project, they've been able to include many more kids.

Ilias turned to Vancouver writer Glen Huser to write the story and lyrics.

"I have to say it brought tears to my eyes because you scribble at your desk and write these words to lyrics — and to have all of these voices and the symphony orchestra, it's humbling in a way," Huser said.

All the students in the choir have their names printed in each copy.

"It's amazing. It's really hard to describe, for people to know who we are — it feels like we're famous," said Sarah Mucci.