Montreal boy who uses a wheelchair rolls into Halloween, thanks to a group of crafters

Émile Laliberté's costume features a dragon's head with eyes light by LCD screens, motorized wings made from golf umbrellas that expand half a metre and a green shirt covered in scales made with a 3D printer.

'I'm in a wheelchair — Halloween is for me too,' says 10-year-old Émile Laliberté

Editor's note: Since publishing this story, Émile Laliberté's costume has been completed. CBC Montreal caught up with Émile on Halloween day and we've updated this story.

It's the first time Émile Laliberté, 10, is rolling into Halloween feeling excited about his disguise: a custom-made dragon costume that encompasses his wheelchair.

His costume was about eight weeks in the making. It features a dragon's head with eyes lit by LCD screens, motorized wings made from golf umbrellas that expand half a metre, a green shirt covered in scales — some of which were made using a 3D printer — and a castle made with Styrofoam, complete with a pot of gold.

It was a hit with his friends at École des Moissons in Repentigny, Que., just east of Montreal. His classmates crowded around him when he got off the school bus.

The costume was built by a group of Montrealers who call themselves Duct Tapers Anonymous. Concordia's Milieux Institute, an art and design centre, also lent a hand in creating Laliberté's costume.

"We needed something to do, and this is our first official project," said Bob Murphy, a handyman and the founder of Duct Tapers Anonymous.

The group has a 150 members but a core group of 12 worked on the costume.

"It was a perfect bunch of people," Murphy said. "[Émile] is exuberant, he's spunky, he's a smart kid and he's a loveable, loveable kid."

Muurphy said he hopes by next Halloween more teams of crafters will come together to build costumes for more children in wheelchairs. 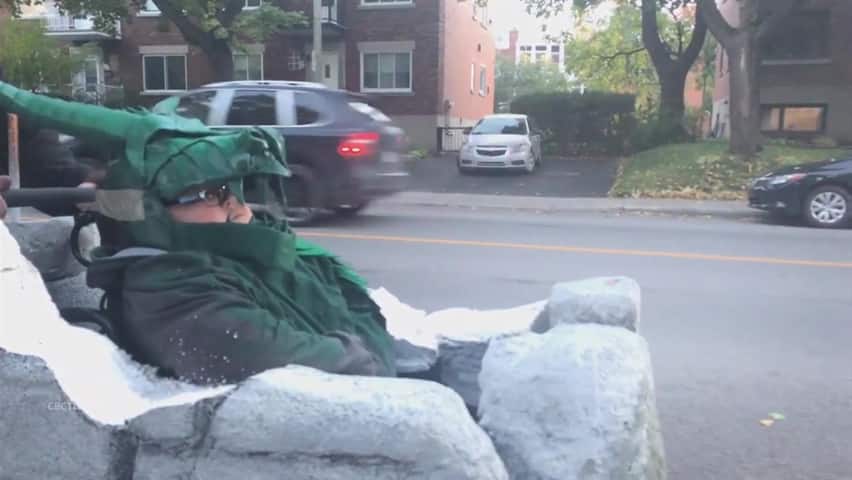 The project was inspired by Magic Wheelchair, an American non-profit that creates elaborate costumes for children in wheelchairs.

"This year is the best year because my costume is with my wheelchair."