'In order to charge you, [they] got to see the money,' ex-mayor Michael Applebaum says in recording

In the weeks leading up to the arrest of Montreal mayor Michael Applebaum, the man who was once his right-hand man helped police listen in on their hushed conversations about the province's crackdown on corruption, a Quebec court learned. 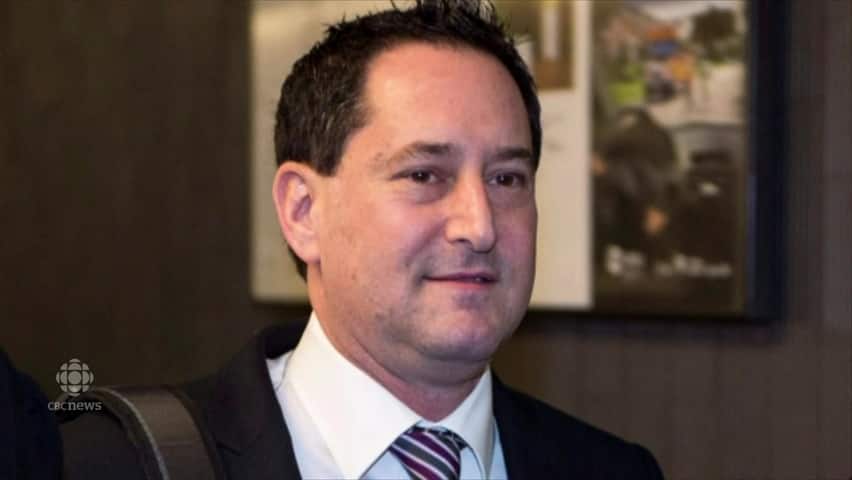 Conversations between Applebaum and Tremblay were used as evidence in court

4 years agoVideo
1:14
Applebaum is charged with conspiracy, breach of trust and two forms of corruption: municipal corruption and fraud on the government. 1:14

In the weeks leading up to the arrest of Montreal mayor Michael Applebaum, the man who was once his right-hand man helped police listen in on their hushed conversations about the province's crackdown on corruption, a Quebec court learned.

Hugo Tremblay worked as Applebaum's political aide and later chief of staff between 2006 and 2012, when  Applebaum  was the borough mayor of Montreal's Côte-des-Neiges – Notre-Dame-de-Grâce neighbourhood.

On Monday, Judge Louise Prevost heard testimony from Tremblay, who said it was Applebaum who taught him how to solicit cash and arrange illegal fundraising from real estate promoters.

Tremblay outlined how he would meet real estate promoters in cafés, where they would hand over plastic bags filled with video game cases stuffed with cash, in exchange for bureaucratic favours.

He's the Crown's first witness, and Tuesday is his second day of testifying against his former boss.

​Applebaum is charged with conspiracy, breach of trust and two forms of corruption: municipal corruption and fraud on the government.

Applebaum has always maintained his innocence.

Follow along with live blog. Story continues below blog.

​Tremblay told the court how he received a phone call from anti-corruption investigators soon after Applebaum was elected by council to take over as Montreal mayor following Gérald Tremblay's resignation.

After some initial resistance, the former aide said he eventually agreed to help them by wearing a wire.

On Tuesday, the court heard three different audio recordings from May and June 2013, in the weeks leading up to Applebaum's arrest on June 17.

In the recordings the men speak at times in hushed tones, even whispers.

He said that before he and Applebaum had these conversations, they would both turn off their cellphones.

'They have to have the money'

Applebaum does not admit to wrongdoing in any of the audio played in court, but there's a contrast between his manner of speaking compared to the public version of the mayor Montrealers knew.

In November 2012, Applebaum stood at city hall and swore to Montrealers that he would "be your eyes and ears and that I will get back what has been stolen from you."

On Tuesday, the corruption trial heard that a few months later, on May 3, 2013, he was recorded whispering with Tremblay about corruption allegations.

Tremblay testified that he was wearing a wire during the conversation, which he said happened in Applebaum's basement.

He told the court Applebaum acted strangely, patting his shoulders and back as if to check for a microphone.

In the recording, Tremblay explains to Applebaum that he was interrogated by police, and that he's worried.

Applebaum reassures him and says: "They can come up all kinds of lies … but in the end they have to have the money.

Later in June — seven days before Applebaum's arrest — Tremblay spoke with his former boss again, this time over the phone.

He told the court he was calling from a Montreal police station, but he told Applebaum that he was in Quebec City.

In the recording, Tremblay tells Applebaum that he'd just received a call from Dessau executive Patrice Laporte, who'd told him he was going to co-operate with police.

Applebaum tells Tremblay "I don't understand … but listen, if you can come see me, we can talk."

Tremblay continues, explaining that he can't act like nothing has happened.

When Tremblay responds that Laporte is the one who paid him cash for the NDG Sports Centre contract, Applebaum doesn't seem to understand.

"If you did something that was illegal, you have to take responsibility. But what have you done? What happened?" he says on the recording.

He spent the afternoon grilling the Crown's witness about his close relationship with police investigator Luc Lamy.

Tremblay acknowledged it was "a good relationship." He said they'd started communicating in March 2013, when he agreed to collaborate with police. He said the last time they spoke was likely June or July of this year.

Tremblay explained it was a difficult period for him when he agreed to turn on his former boss and help police. He said he felt comfortable speaking to Lamy.

Among the examples Teasdale cited in court, there was a text message wishing Tremblay a happy birthday, and a Christmas present for his daughter in 2013 — a toy plastic doll.

The cross-examination is expected to continue Wednesday morning.

Applebaum has requested to have a trial before a judge alone, rather than a judge and jury. The trial is expected to last at least two weeks.

The following is the audio from a June 10, 2013 phone call between Applebaum and Tremblay that took place over wiretapped phone from a Montreal police station.

Jaela Bernstien is a reporter based in Montreal. She's covered a wide range of news topics, ranging from criminal trials to ice age caves, and everything in between.