Ross Baisas immigrated to Quebec from a town in the Philippines renown for its woodcarvers. He's now an award winning ice carver at the Montreal Casino.

Ross Baisas kneels before a block of ice.

He etches a light outline of a palm tree on the front of the rectangular block using a chisel.

"As an artist … I look inside the ice block and picture whatever characters I am going to put in it," he says.

Once Baisas has the image in his mind, the power tools come out. He first uses a chainsaw to take out large pieces of ice. Then he uses a set of chisels, each one a different size, to create the overall shape of the sculpture. The final step involves using a blow-torch to make the texture of the block shines.

One hour later, Baisas' vision comes to life: a farmer on a bull, sitting beneath a leaning palm tree.

It's all in a day's work for Baisas who is a kitchen artist at the Montreal Casino, where his work is displayed inside its restaurants.

For Baisas, ice carving isn't a job — it's a vocation. 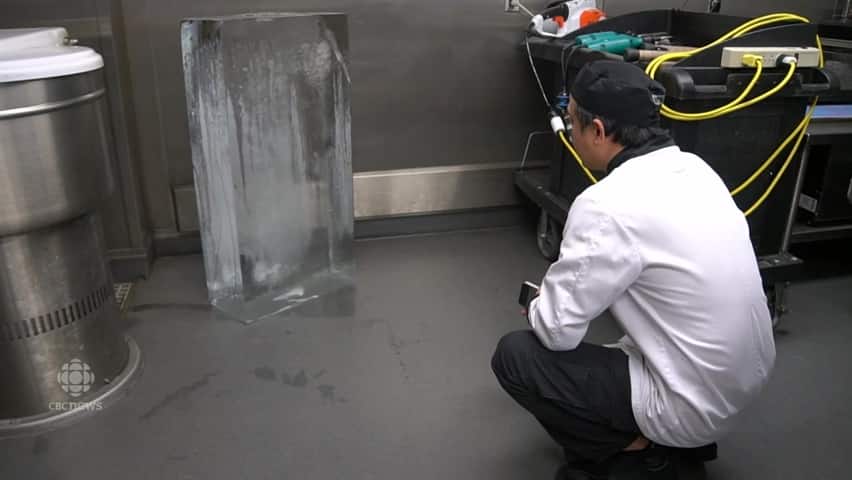 Baisas immigrated a decade ago from the Philippines, a country not known for ice. He's from a village called Paete, which means "chisel" because the town is famous for its wood carvers.

He learned the trade from his father, who is also a wood carver.

Baisas says carving wood isn't all that different from carving ice, so he quickly accepted a job offer from the Montreal Casino when they recruited him from the Philippines.

"I said, 'Yes!' I'm going to express myself to a different people, in a different country."

Since immigrating, Baisas has learned some French, has gotten married and had two children.

According to Baisas, there are no more than a dozen ice carvers in Montreal, and a major motivation for him to come to Quebec was the opportunity to compete in ice carving competitions.

"I thought about the passion first. I didn't think about … how am I going to live there."

Outside of work, he travels the country to take part in ice and snow carving tournaments with his brother, Antonio. The pair have won titles in several international competitions, including in Banff and Edmonton earlier this year. Baisas has also travelled as far as France and Poland to compete.