Fire officials in McMasterville, southeast of Montreal, suspect arson in a major fire at a primary school. 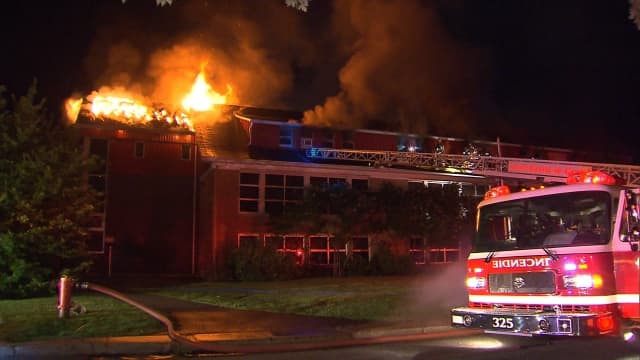 7 years ago
1:14
Fire officials in McMasterville are looking into the possibility that a fire at La Farandole primary school was set deliberately. 1:14

Fire officials in McMasterville, southeast of Montreal, suspect arson in a major fire at a primary school early Friday morning.

Around 100 volunteer firefighters from McMasterville and surrounding towns worked throughout the early hours to douse the flames at École La Farandole, built in the 1950s.

The school was destroyed by the fire, a loss estimated at $5 million.

Fire department officials say that preliminary information suggests the fire started around midnight when an object was set on fire near the school.

The fire quickly spread to the school and its roof, which became engulfed in flames.

“The flames were considerable and it was difficult to get into the building,” said David Roy, captain of the McMasterville Fire Department.

Police arson experts have now taken over the investigation.

Richelieu-St-Laurent police investigator Francois Cing-Mars told Radio-Canada that youth regularly congregated behind the school but there have been few significant incidents.

"Over the last 12 months, we responded to a couple of broken windows, but it wasn't a real problem spot. It's a little school on a dead-end street," he said.

Marie-Rose Vandemoortele, an official with the Patriotes school board, said that little school played a big part in the small town of about 5,000 people.

The school board and municipality are scrambling to find place for the children by for the coming school year.

“Our priority is to ensure the site is secure and to relocate the students for August,” Vandermoortele said.

The kindergarten to Grade 2 school served around 160 students over the last 60 years.

McMasterville has a young population with growing families and was already struggling with a shortage of classrooms for its students, he said.