The Quebec inquiry into corruption in the construction industry has for the first time heard allegations that a construction boss corrupted a senior elected official at Montreal city hall. 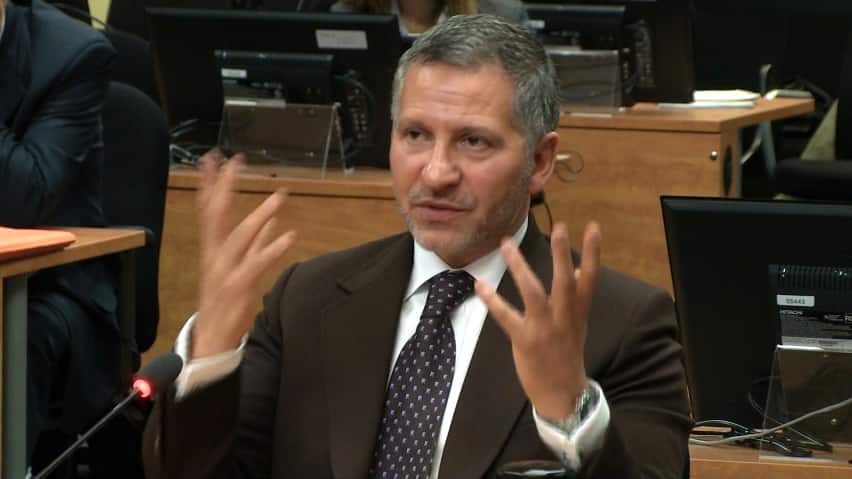 The Quebec inquiry into corruption in the construction industry has for the first time heard allegations that a construction boss corrupted a senior elected official at Montreal city hall.

Elio Pagliarulo, the owner of the Pâtisseries Pagel bakery franchise, told the Charbonneau commission Monday that Frank Zampino – the former right-hand man to Mayor Gérald Tremblay – received a total of $555,000 to facilitate a controversial land deal known as the Faubourg Contrecoeur affair.

He went on to describe a system of kickbacks, intimidation and threats by his one-time close friends and business associates in a loansharking scheme — construction company entrepreneur Paolo Catania and his father Francesco Catania.

Pagliarulo testified how Paolo Catania paid just $5 million for land in east end Montreal valued at $50 million, with the help of Frank Zampino.

Montreal Mayor Gérald Tremblay said Monday that he is eager to comment on allegations against his former second-in-command, Frank Zampino, but he has been asked by police to refrain from making any public comment so as not to jeopardize their investigation.

"They don't want me to cause prejudice to the investigations that are being held presently," Tremblay said.

Tremblay confirmed that he has given sworn statements to police regarding allegations of corruption at Montreal city hall.

He said he has not yet received a subpoena to appear before the Charbonneau commission, but he is anxious to testify.

"What is happening presently causes prejudice to a lot of people, including myself," Tremblay told reporters. "I'd like to be asked to testify as soon as possible."

Tremblay was elected mayor in 2001.  He has said he has not yet decided whether he will seek re-election in 2013.

He said in a deal worked out with Zampino, Catania agreed to pay $20 million for the vast tract of land, minus $15 million — the amount it would ostensibly cost to decontaminate that land.

In fact, he said, the land did not need to be decontaminated at all, but Catania was able to obtain a false report claiming it was polluted.

Pagliarulo said Catania stood to make $80 million in profit over ten years on the residential and commercial development, and in return for Zampino's help, the city politician received three payments of $100,000.

He testified that all of this money was considered as payment in the Faubourg Contrecoeur scheme.

Pagliarulo said Paolo and Frank Catania told him that they belonged to Vito Rizzuto's crime family, and he testified that Montreal's Mafia routinely took a five per cent cut on rigged construction projects.

He named a long list of construction firms that he said colluded to hike the cost of construction contracts for the city of Montreal, including Frank Catania and associates, Catcan, Garnier Construction, BP Asphalte, Mirabeau, Tallarita, Mivela, and Infrabec — the now-bankrupt firm owned by Lino Zambito.

He said all of those firms were founded by people from the same Italian village as the Rizzuto clan, Cattolica Eraclea.

City inspectors allegedly paid off, too

Pagliarulo said Catania also paid off city inspectors, to get approval for cost overruns — routinely handing out $5,000 to $25,000 in cash.

He said Catania was known as "Mr. Extra" because of those overruns — a name he allegedly wore with some pride, referring to himself that way.

He named Luc Leclerc, a former engineer for the city of Montreal, as one of the inspectors that Catania paid off.

Pagliarulo accused Catania of extortion in 2009

Pagliarulo began his testimony Monday describing his close friendship with Paolo Catania, whom he described as his best friend and confidante for 15 years, until a disagreement in 2008-2009.

He said he'd run a loansharking business with the Catanias, taking a 65 per cent cut from what he collected and turning over 30 per cent to Paolo Catania and five per cent to Frank Catania.

Pagliarulo testified his relationship with the Catanias went sour in late 2008 after three borrowers left the scheme without paying their debts. Pagliarulo was left owing Paolo Catania $1,377,727.

Pagliarulo said he was beaten and left with multiple fractures to his face after Catania's associates abducted him and held him for nearly three hours on Aug. 1, 2009.

At the time, Paolo Catania publicly denied the accusations, and the charges against him were later dropped in 2010 for lack of evidence.

"If I was his best friend at that time, and he did what he did to me, you can just imagine what he can do to a stranger," Pagliarulo told the commission. "Father and son don't mess around.  In the community, you don't mess around with those two people."

"They're very connected to a crime family. It's known in the Italian community or in the community in Quebec that you don't fool around with them," he repeated.

The witness told the Charbonneau commission that Catania had once asked Pagliarulo to burn trucks owned by Garnier Construction, because the two construction bosses were in a dispute over the awarding of contracts. Pagliarulo said he told Catania he could "find someone," but the plan was never carried out.

Paolo Catania was arrested by Quebec’s Permanent Anti-Corruption Unit (UPAC) last May, in the same sweep in which former city politician Frank Zampino was picked up.

In police surveillance video presented before the Charbonneau commission, Catania was seen greeting mob bosses at a Christmas party held at the Consenza Social Club in 2005.