Applebaum said a shortage of asphalt means that after a current contract expires on April 15, Montreal's potholes will go unfilled, unless companies named in relation to the Charbonneau Commission are granted the contract. 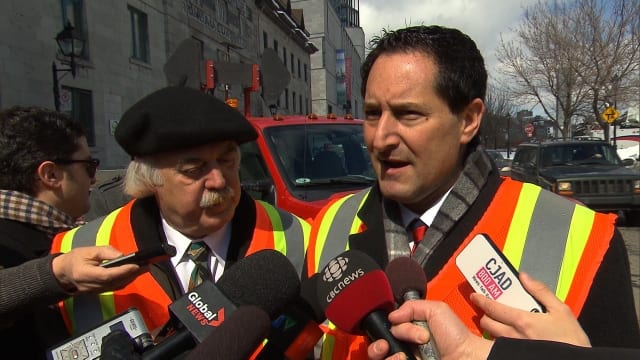 8 years agoVideo
8:19
Mayor asks Montrealers to weigh in on asphalt vs. corruption 8:19

Montrealers have to choose between having potholes, or having them filled by companies caught up in the corruption inquiry.

City council refused on Monday to award a contract valued at $5 million over two years to seven asphalt companies because they’ve been named by or linked to the Charbonneau Commission corruption inquiry.

But the city’s executive committee is now saying it hasn’t really got any other options.

"Today, what we’re saying here is that we have two choices," Applebaum said.

"One is that we can not give the contract to these companies who have already been stated in the media and also some of them at the Charbonneau Commission, or we can give the contract," he continued.

"By giving the contract, we’re ensuring the security of our drivers, our pedestrians and also our cyclists."

He said a shortage of asphalt means that after a current contract expires on April 15, Montreal’s potholes will go unfilled — unless these companies are granted the contract.

Applebaum is asking Montrealers to go to the City of Montreal’s website to vote on whether they feel the contracts won by these seven companies based on their bid and geographic location should be honoured.

"The contract can be granted all the while knowing that we are dealing with companies that might not have a very enviable reputation," reads the survey.

Applebaum said he has no doubt Montrealers will choose to have the potholes filled.

He also denied unloading the responsibility of making the call on citizens.

"This contract would allow to the same players we hear every day at the Charbonneau Commission a contract for two years," he said.

Danielle Pilette, a professor of municipal management at University of Quebec in Montreal, said the city should look elsewhere for companies with better reputations.

"There is also the option to use companies outside of Montreal to fill the contracts this year. This would drive up the cost a little bit, but it would help to open up the market," she said.