A 25-year-old man who injured two soldiers in a hit and run and was later fatally shot by police in Saint-Jean-sur-Richelieu, Que., was known to federal authorities as someone who had been "radicalized," according to the RCMP and the Prime Minister's Office. 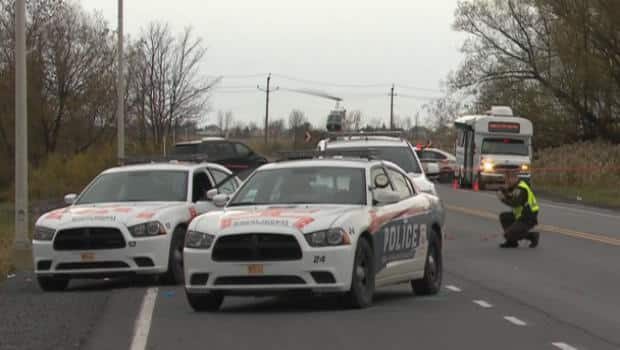 Soldiers injured in hit and run

6 years ago
3:42
Authorities investigate it as a 'possible terror attack' 3:42

A 25-year-old man who injured two soldiers in a hit and run and was later fatally shot by police in Saint-Jean-sur-Richelieu, Que., was known to federal authorities as someone who had been "radicalized," according to the RCMP and the Prime Minister's Office.

Martin Rouleau, a resident of Saint-Jean-sur-Richelieu, about 40 kilometres southeast of Montreal, was known to provincial and federal law enforcement agencies, the RCMP said.

"This individual was known to federal authorities, including our integrated national security investigations team in Montreal, who along with other authorities were concerned that he had become radicalized," the RCMP said in a statement Monday evening.

Radio-Canada reported that Rouleau's Facebook page identifies him as Ahmad LeConverti (Ahmad the Converted). Neighbours told the CBC's French-language service that he converted to Islam about a year ago.

Rouleau died of his injuries Monday evening, several hours after he was transported to hospital after being shot by municipal police officers at the end of a high-speed chase. Since the shooting involved municipal officers, provincial police are investigating.

The hit and run occurred around 11:30 a.m. ET when two members of the Canadian Armed Forces were hit by a car in a parking lot of a commercial plaza. Both were injured, one critically. Police have not released their names.

Not long after the two were hit, the car that hit them was spotted by officers from the Saint-Jean-sur-Richelieu police force, who chased the vehicle for four kilometres.

The chase ended when the driver lost control of his car, flipping it into a ditch. Police said the man got out of the vehicle, and several shots were fired by officers. Police said the incident also involved a knife but did not elaborate.

"We found a knife on the ground," said provincial police Sgt. Michel Brunet  "I can't tell you if he had it in his hands at the time."

​Nathalie Vanasse was driving by at the time with her husband and saw the vehicle in the ditch.

“I was scared. I started crying," she said. "I wanted to get out of my car to go help, before the shots were fired … I heard and saw shots being fired — seven shots

"I saw a police officer jump to the side to protect himself. That's when I saw the suspect fall to the ground."

Hit and run raised in House

The hit and run was later raised in question period in the House of Commons by Conservative MP Randy Hoback, who questioned Prime Minister Stephen Harper about "unconfirmed reports of a possible terror attack" targeting members of the Canadian Forces.

Harper, reading from a piece of paper, would only say he was "aware of these reports" and that they are troubling.

Opposition Leader Tom Mulcair told reporters after question period that it was a "mistake" for Harper to comment on the incident.

"I was a bit surprised by the interplay between the prime minister and one of his backbenchers when we're still waiting for any information from the police," the NDP leader said. "Let the police do their job, and then we'll know whether we're dealing with the type of situation they've described,"

The Prime Minister's Office later issued a statement saying Harper had been briefed on the incident Monday afternoon by RCMP Commissioner Bob Paulson, Chief of Defence Staff Gen. Tom Lawson and national security adviser Stephen Rigby. It's unclear whether the briefing took place before or after question period.

Federal authorities have confirmed that there are indications that this is clearly an individual who has been radicalized.- Prime Minister's Office statement

"Federal authorities have confirmed that there are indications that this is clearly an individual who has been radicalized. As security agencies of Canada reported ... Canadians should remain vigilant," the PMO statement said.

When asked about the reports Hoback mentioned in Parliament, Lt. Guy Lapointe of the Sûreté du Québec said police are looking into whether the soldiers were targeted by the driver.

"All I can say is that the theory that this is a deliberate act is part of what we’ll be looking at," Lapointe said. "But it’s really too early to speculate at this point."

On the Facebook page allegedly belonging to Rouleau, one post is a quote from a U.S. soldier who served in Iraq: "We were told we were fighting terrorists, the real terrorist is me and the real terrorism is this occupation."

Another post references the black flags the Islamic State of Iraq and Syria (ISIS) display.

Despite the alleged incendiary posts on Facebook, Ray Boisvert, the former assistant director of intelligence with the Canadian Security Intelligence Service (CSIS) told CBC News that foiling actual violence before it occurs can be difficult if plans are never communicated.

"The question for authorities is, when did that person go from just doing a collage of information to actually thinking about active attack planning? That's the big challenge."