Leonard Cohen fans have it darker inside ambitious MAC exhibition

Monday’s sunny sky quickly dissolved into a dark, cavernous experience inside Montreal's Musée d'art contemporain (MAC), where the long-awaited exhibition Leonard Cohen: A Crack in Everything opened to a smattering of Cohen mega fans.

Monday's sunny skies quickly dissolved into a dark, cavernous experience inside Montreal's Musée d'art contemporain (MAC), where the long-awaited exhibition Leonard Cohen: A Crack in Everything opened to a smattering of Cohen mega fans.

The workers had just put the final touches on the exhibition when the doors opened at noon.

Visitors settled into bean-bag chairs and couches in dark, expansive rooms, gazing up at projections of Cohen on stage.

They beamed as they emerged from the darkness.

"I'm obsessed with it. I love it," Sara Udow said.

Udow came from Toronto to attend Tower of Song: A Memorial Tribute to Leonard Cohen with her parents Monday night. Early access to the museum was included in her VIP ticket.

The exhibition opens to the public Thursday.

Finding perfection in the broken places

Forty artists from 10 countries are celebrating the legacy of Leonard Cohen with works that springboard off elements of his life and work.

MAC director and chief curator John Zeppetelli said he was drawn to the idea of an exhibition on Cohen years ago because the Montreal poet and singer-songwriter was a uniquely beautiful, probing figure.

The title of the exhibition was chosen to reflect the theme of loss which permeates much of Cohen's work.

"Basically, his whole artistic output is the imperfection of things," Zeppetelli said.

Take the exhibition's title, A Crack in Everything, from a line in Cohen's song Anthem, recorded in 1992.

"The line finishes: 'That's how the light gets in,'" said Zeppetelli. "This imperfection is how we're actually able to move forward."

“I’m obsessed with it, I love it,” Sara Udow said of the exhibition. Here she’s playing a piano that delivers lines of Cohen’s poetry <a href="https://t.co/tJgonsTs3m">pic.twitter.com/tJgonsTs3m</a>

The exhibition starts with The Depression Chamber by Israeli artist Ari Folman.

Monday, a line formed outside the small room: only one person can have the experience at a time.

A visitor lies on a daybed, then, with the help of capture technology, see herself on the ceiling and hears the song Famous Blue Raincoat.

Folman considers Famous Blue Raincoat Cohen's most depressing song, and the experience in that room sets the tone for what follows in the dimly lit corridors.

The first large room of the exhibition is stark and nearly empty. Three doors invite visitors to branch off.

In one, recordings of Cohen take on a new dimension with Christophe Chassol's piece, which borrows a scene from a 1965 Cohen documentary and turns it into a kind of song.

The works move from whimsical — the projection of a bird filmed sitting on a wire — to political: Chicago artist Michael Rakowitz's I'm good at love, I'm good at hate, it's in between I freeze.

That multimedia installation has, as its focal point, a video projection filmed at the Alhambra Palace Hotel in Ramallah, Palestine.

Rakowitz's goal is to offer a revisionist history of Cohen's presence in the Middle East.

"He has a huge following in the Middle East and quite a few fans in places like Ramallah. After he decided to play in Israel, a lot of people had problems with his music," Rakowitz said.

After seeing the work, Udow, who is Jewish, said the work helped her re-evaluate what is happening in Palestine.

"It really brought to light the complexity and the conflict and that tension that you feel as a Jew, with those issues," Udow said.

From dark to darker

The narrow halls and darkness of the space give the exhibition a dream-like quality. Some works capitalize on that by inviting visitors to contemplate Cohen's life existentially.

American photographer Taryn Simon uses a found object to reflect on the shifts which took place in the world when Cohen died.

She displays the front page from the New York Times on Nov. 11, 2016, the day after news of Cohen's Nov. 7 death was released.

The page features President-elect Donald Trump shaking President Barak Obama's hand on their first meeting at the White House. At the bottom of the page runs the headline: "Writer of 'Hallelujah' dies." 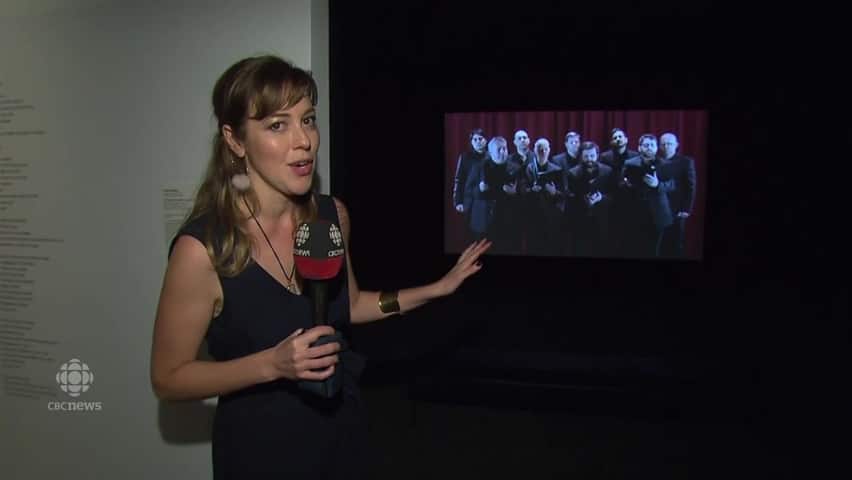 For Zeppetelli, the world's geopolitics are encapsulated in those two stories sharing a page.

"The poet of sorrow and brokenness was gone — and the ascension to the highest office in the world of this charlatan freak," Zeppetelli said.

The exhibition is co-curated by Zeppetelli and Victor Shiffman and features commissioned works along with exclusive covers of Cohen songs.

The final room of the exhibition seems to follow Cohen's prompt from his final recording, You Want it Darker, putting the viewer at the centre of a blackout.

This listening room is where visitors are invited to sit and hear the exclusive Cohen covers commissioned by the MAC. 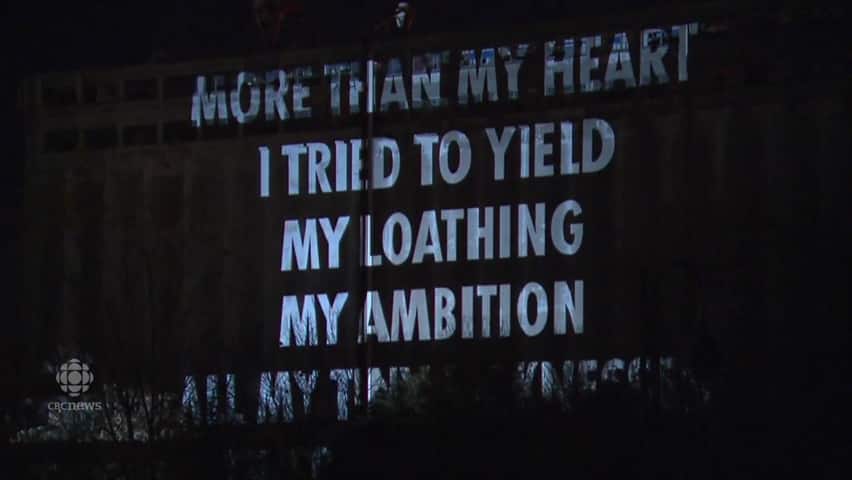 3 years ago
0:57
On the anniversary of the death of Montreal legend Leonard Cohen, an outdoor exhibit features Cohen’s lyrics projected on the side of Silo #5 in Montreal’s Old Port. 0:57

Elysha Enos is a journalist with CBC Montreal.