Lockout at one of Canada's largest smelters drags into 2nd year, with no end in sight

Picketing workers claim management is using scabs. Management claims the smelter was unproductive. As the two sides bicker, the Quebec government is growing worried about the lengthy lockout at one of its largest smelters.

With pickets outside Alcoa's aluminium plant in Bécancour, Que., output has been reduced to trickle

A Discount mini-bus, escorted by several security guards, edges toward the makeshift checkpoint that guards the lone road in and out of the sprawling ABI aluminum smelter in Bécancour, Que.

The bus's path is blocked by a dozen picketers, who cup their hands to the tinted windows and try to identify the obscured figures inside.

"There were scabs in there, for sure," one locked-out worker says after they let the bus continue onto the main road.

The workers repeat a similar routine several times a day, just as they have done ever since 3 a.m. on Jan. 11, 2018, when the smelter's management locked them out.

Without these 1,030 workers, the smelter 170 kilometres northeast of Montreal was forced to shut two of its potlines, the rows of electrolytic reduction pots used in the smelting of aluminum. A third has been kept running at reduced capacity by management and salaried employees.

The union, the 60,000-strong Syndicat des Métallos, believes management has also been using scabs, which is illegal in Quebec. The smelter's majority owner, Pittsburgh-based Alcoa, denies the allegation.

Quebec's labour tribunal held hearings on the matter last year and is expected to rule in the coming weeks.

On the picket line, workers have developed their own sure-fire method of determining whether those entering the plant are managers or illegal replacements.

"If he's got soft hands, it means he's not a scab, because if he's doing real work inside, he have hard hands," said Claude Dumas, who operated a machine that pours out liquid aluminum before the lockout. 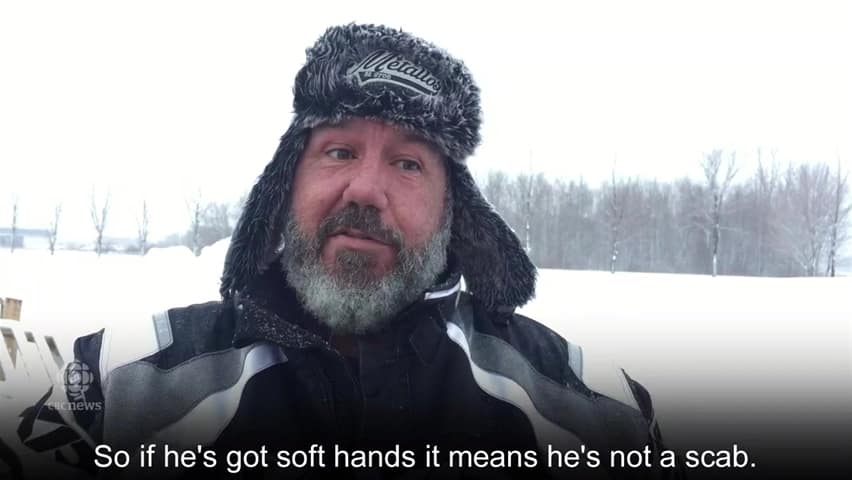 On January 11, 2018, in the middle of the night, over a thousand unionized aluminum workers in Becancour, Que were locked out by Pittsburgh-based Alcoa.

2 years agoVideo
2:45
The workers say the company is sneaking in "scab" labour. The company accuses the union of using strong-arm tactics that put the safety of the plant in jeopardy. One year later, both sides are as dug-in as ever. 2:45

Digging in for long fight

The labour dispute enters its second year today, with little hope that the two sides will reach an agreement any time soon.

"It's more complex than I thought," Boulet told a local newspaper last month.

At one level, the conflict revolves around the retirement plan and seniority. Alcoa imposed the lockout after the union turned down a contract offer that proposed moving away from a defined-benefit pension plan and sought more flexible hiring practices.

"ABI's management has always underscored the need to improve productivity and profitability at the smelter," Alcoa said in a statement to CBC News.

But some observers have suggested something larger is also at stake. The collective agreement at the Alcoa smelter in Baie-Comeau​ is up this year, and they suggest the company might be trying to use the tough stand it's taken in the Bécancour dispute to set an example.

"The employer's demands have increased since the beginning of the lockout. There is likely a ruse in some of those demands," Jean-Claude Bernatchez, a labour relations expert at the Université du Québec à Trois-Rivières, told Radio-Canada recently.

The union, the Quebec branch of the United Steelworkers, is girded for a long fight.

It has amassed a sizeable war chest, drawn in part from donations, loans and the United Steelworkers international strike fund. In exchange for regular eight-hour shifts on the picket line, locked-out workers receive around $600 weekly, tax free.

That's roughly half their regular pay, however. Some have taken on part-time work to supplement their income; others are just making do with less.

"It creates uncertainty for our families," said Dumas, 49, who has three children in their early 20s.

"There are small tragedies. Divorces, bankruptcies, people having to give up their homes. It's sad. It affects everyone."

As the conflict drags on, the mayor of Bécancour, Jean-Guy Dubois, says he worries more and more about a disaster scenario: the smelter's closure.

Alcoa is the largest employer in this town of 12,000 residents. The smelter's property taxes account for 17 per cent of Bécancour's annual revenue. The smelter also supports several local suppliers.

"I don't want to think about [a closure]…. All would change here," Dubois says.

For the moment, that possibility seems remote. The smelter is less than 40 years old and is currently the third-largest in Canada, in terms of total capacity.

But the absence of progress at the negotiating table alarms the Coalition Avenir Québec government.

In opposition, the CAQ had criticized its Liberal predecessor for doing too little to resolve the lockout.

The longer the dispute drags on, the more it is costing Quebec taxpayers: The Métallos claim provincially owned Hydro-Québec is losing more than eight dollars for every second that the plant is operating at reduced capacity. A year into the lockout, that figure is closing in on $220 million.

The CAQ promised during the fall election campaign to bring more high-paying jobs to Quebec's heartland — the kind of jobs that are at stake in Bécancour.

Earlier this week, Boulet appointed a task force to determine what, if any, common ground could be found between the two sides, hopefully to pave the way for a new round of talks.

"I am extremely preoccupied by the repercussions of this conflict," he said.

"I live in [nearby] Trois-Rivières, and I meet on a daily basis people who speak to me about the human consequences, the psychological distress and the impact on the economy."

On the picket line, though, workers say it will take more than a settlement to get over the hard feelings that have been brewing for the past 365 days.

"When we go back in there, it's going to take years and years to fix things," says Dumas.

Behind him, his colleagues huddle around two steel drums that have been hollowed out and turned into a fire pit. A portable radio plays 1990s rock music as they wait for the next car to pull up to the checkpoint.

"We'll never forget what happened to us," Dumas says.

With files from CBC's Simon Nakonechny and Radio-Canada