More than one year after a fire destroyed their home, the Bassenden family is relieved to see the remains demolished.

Family continues to battle with insurance company and town 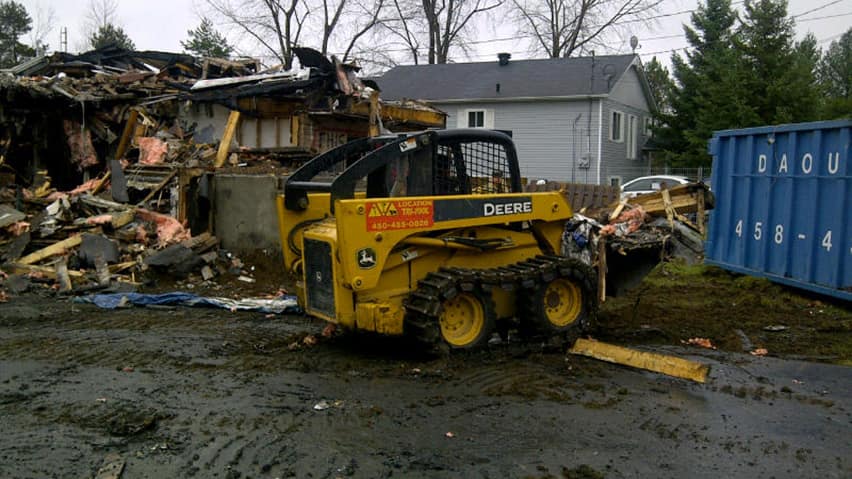 After a year of court battles with their insurance company and months of staring at the burnt remains of their home, the Bassenden family is relieved to see their home demolished.

The family of three has been living in a trailer for over a year, since a fire destroyed their home in Saint-Lazare in March 2011.

According to Allen Bassenden, the insurance company rejected their claim because it believes he violated the homeowners insurance policy by running a business repairing cars in the garage.

The family can't afford to pay for the cost of demolishing their home and so they moved into a trailer on their property.

Local owner of Locations Tri-Tool Dean Trineer heard about the Bassenden's struggle and decided to help out. He offered his equipment and services free of charge to demolish the home.

"I'm amazed that nobody else has stepped in to help them," he said.

"I'm shocked that so many people are living in this tiny little trailer under these conditions," said Linda Foley, the company's controller.

While the Bassenden's are relieved to see the burnt remains finally removed, for them it is a small win in an ongoing battle.

They still can't afford the cost of rebuilding their home, and because of a city bylaw prohibiting residents from living in trailers, they could soon end up on the streets.

"We don't have any money because we still have to pay for the lawyers … to fight this case with the insurance company," Bassenden said.

The family could be forced off their property as soon as May.

"We are literally taking it one day at a time," he said.

Trineer is asking members of the community to step forward and help with the cost of removing the debris, which could add up to $5,000.

The city of Saint Lazare said it will not comment on the case while it remains before the court. The Bassenden's insurance company, Belair Direct, did not reply to interview requests.