Better, more comfortable accommodations are being set up for the 200 or so people who can't return to their homes. 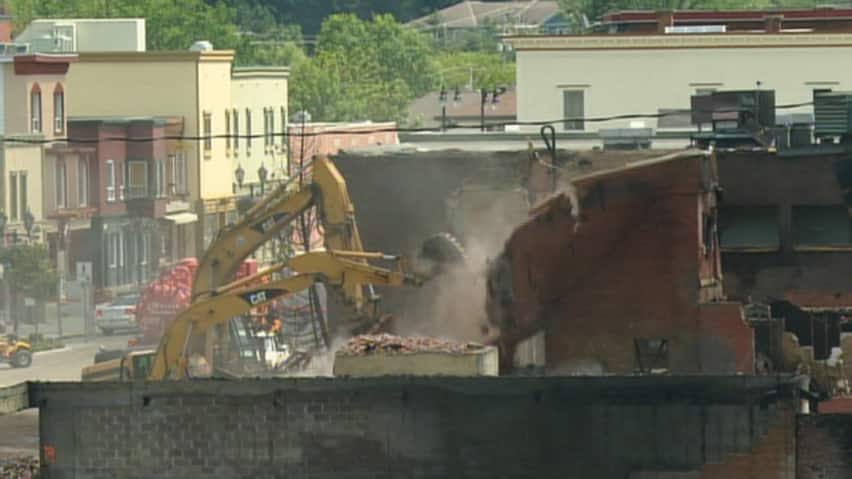 RAW: Buildings torn down in Lac-Mégantic

8 years ago
0:10
Two commercial buildings considered to be unstable were demolished. 0:10

The residents of Lac-Mégantic are slowly returning to their normal lives.

Better, more comfortable accommodations are being set up for the 200 or so people who can’t return to their homes.

Those who were forced from their homes will be moved from temporary evacuation centres to hotel rooms and more stable housing for the time being.

As well, the church reopened for mass for the first time since the accident on Saturday, July 6.

Between 50 and 60 people attended the Sunday service. Some who attended called it a healing moment.

More than 100 teddy bears were distributed to families with young children in the parking lot of the local Canadian Tire.

Montignac High School will continue to serve as a central location for services. Members of Quebec’s civil security service said it’s where residents can go for their new ID cards, apply for financial assistance and receive psychological counselling.

Mayor Colette Roy-Laroche encouraged residents and people from outside Lac-Mégantic to use the lake and tourism services in the region.

She said it was important to the town’s people for visitors to come, calling it a "show of solidarity that is much appreciated."

She added that visitors should stay away from the area that was damaged by the train explosion. They wouldn’t be able to see it anyway, she said, due to a wall erected around the town’s red zone.

Within the red zone, workers tore down two commercial buildings in the centre of town considered to be unstable on Sunday afternoon.

Michel Forget with the Sureté du Québec announced the demolition on Sunday morning, informing residents they would hear three whistle blows before they began work to tear the buildings down. No explosives were used in the demolition.

Also on Sunday, three firefighters were slightly injured and treated on site. According to the SQ, one worker for a pumping company blacked out and was transported to hospital, where he is in stable condition.